Millions of desperate people are putting pressure on transit sites. Regional policy needs to improve to offer them protection.

There is a need for increased regional policy and protection to tackle the mounting pressure on transit sites, write Melissa Phillips and Antje Missbach.

In mid-2014, the number of people of concern to the United Nations refugee agency, UNHCR, stood at 19.5 million.  Since then, Europe has seen an influx of hundreds of thousands of desperate people escaping harrowing conflict in Syria and the Middle East.

Such movements of people put further pressure on transit sites– places people move through on their way to Australia or Italy for instance – and emphasises the need for increased regional policy and protection.

As countries around the world grapple with the complex and dynamic nature of refugee movements, our research into transit sites offers a deeper understanding of the forces driving irregular migration.

It also points to the need for increased regional approaches to refugee protection, a policy recommendation also promoted by the CEO of the Refugee Council of Australia, Paul Power. In doing so we put the conditions and policies of the transit country in the centre of our analysis, rather than the push and pull factors.

When developing their asylum and migration policies, countries in the Global North need to pay more attention to the unseen and unintended consequences of their increasingly restrictive regimes onto the neighbouring countries and transit states, which has helped to create more exploitation and harm for transiting asylum seekers and refugees.

At the level of popular discourse in Australia and Europe, humanitarian pleas for the prevention of deaths at sea can result in policies that not only shift responsibility for the protection of asylum seekers to neighbouring states, but also take no account of the many unreported deaths in transit.  The economics of exploitative transit feed on people’s desperation and their desire to find protection and other opportunities in the Global North, and show the urgent need for more a protective environment for transit migrants that reduces their reliance on irregular means, and the risk of getting stuck in unsafe environments. 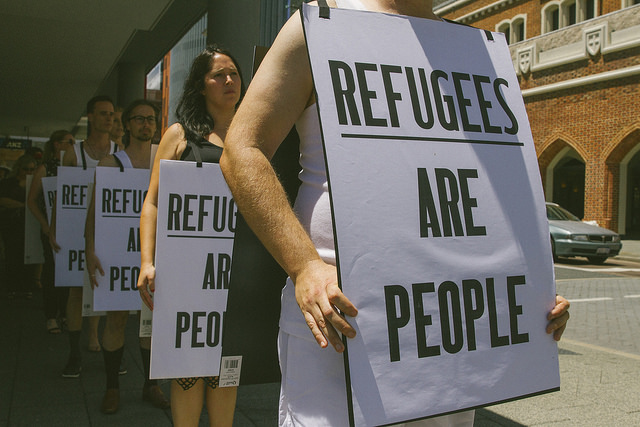 Transit migration has become more visible due to the increasing levels of displacement worldwide and its increasingly protracted nature. While most refugees remain close to the countries from which they originate, for example 1.5 million Afghans in Pakistan, 4 million Syrians in neighbouring countries and 500,000 Somalis in Kenya, others move on again in the hope of finding permanent protection or a better life outside of refugee camps. These onward journeys are lengthy, uni-directional and often facilitated by smuggling networks. During these journeys people are considered to be in transit, even though they are often stuck in transit countries. Not only is their onward mobility restricted, but they are also prevented from local integration.

Transit migration as a term and migration category did not find its way into public policy discussions until the EU expanded into Eastern Europe in the early 2000s. From its first uses in the public policy debate, transit migration was embedded in the discourse on illegal immigration and asylum panic. The politicisation of the term that connects it with irregularity and illegal means has had a negative impact on the study of the phenomenon.

Although being in transit often involves acts of irregularity and illegality, it is wrong to delimit transit migration as essentially illegal; it obscures the bigger picture of this long-term migration process, which often includes both regular and irregular modes of entry and residence at different points. Moreover, it deflects from the ‘illegalisation’ of irregular travellers by governments in the transit states and reception countries, which seek to criminalise these refugee movements.

Khalid Koser, Deputy Director and Academic Dean at the Geneva Centre for Security Policy notes that switching back and forth between regularity and irregularity may be attributed to lack of knowledge of administrative regulations, but it may also be a deliberate choice. The dual nature of transit as both highly changeable and unpredictable has led others to characterise it as a stepwise process or a fragmented journey.

Depending on where they are located, many refugees head for transit countries in the hope of eventually reaching another safer country. For instance, many displaced people use Indonesia and Libya as a stepping point to reach Australia, and Italy and other parts of Europe respectively, and they have to embark on highly risky sea journeys. Indonesia and Libya have become transit sites because of many factors, including their proximity to locations in the Global North where conditions are perceived by transit migrants as more favourable, smuggling networks are present and a relatively lax legislative environment prevails.

With more than 17,000 islands, Indonesia is the world’s largest archipelagic state, has the largest Muslim population, and is the strongest economy in Southeast Asia. Libya has long been a destination for migrants and a transit point for people from other parts of Africa seeking to reach Europe, because of its geographical location and temporary employment opportunities. While there are no estimates of the number of refugees inside Libya, recent Frontex figures show that 170,760 people reached Europe by sea, having departed from Libya, since January 2015.

As Indonesia and Libya have grown in importance as transit sites, there has been a concomitant rise in the economics of exploitative transit that benefits local economies beyond smuggling networks. For example, the main income of the coastal town of Zuwara in northern Libya is said to be people smuggling. Corrupt government officials, locals and people in transit are part of a culture of embezzlement, extortion and self-enrichment that sustains deeply embedded economies of exploitation around transit sites. Stuckedness, defined here as the prolonged, involuntary stay of migrants and asylum seekers in countries that they hoped to pass through quickly, serves the exploitation of migrants and refugees by state and non-state actors alike, and encourages further exploitative economics in/of transit. Not only are migrants and refugees forced to pay higher prices for accommodation and food, but they also are often robbed of their cash and belongings during raids and arrests.

Policy responses of Western countries towards transit countries have been misaligned. For example, Australia sought to strengthen multilateral collaboration with Indonesia through consultative means under the so-called Bali Process, to cope with the unregulated arrival of asylum seekers, especially through regular Regional Ministerial Conferences on People Smuggling, Trafficking in Persons and Related Transnational Crime. For many years, the Australian government has tried to persuade Indonesia to take greater responsibility in managing asylum flows, but has failed to do so. Nevertheless, Indonesia has received Australian funding to step up its border protection equipment, train members of its national police to counter people-smuggling networks, and refurbish some of its immigration detention centres throughout the archipelago.

We can see how short-sighted policies that do not put transit at the centre of the frame, shift responsibility for the protection of asylum seekers to neighbouring states and offer no protective measures for migrants and refugees on the move are.

A look at Australian policy changes helps illustrate this point.  Despite widespread concern for asylum seekers drowning during their voyages, Australia has neglected the basic human rights of the maritime asylum seekers it has previously intercepted and detained in its offshore detention centres on Manus and Nauru. Moreover, Australia penalises asylum seekers for their mode of entry with undetermined periods of detention and lack of access to legal representation.

Following the Australian policy regime towards onshore asylum seekers results in people being stuck in transit sites, leading to further exploitation of refugees and a deterrence driven approach that avoids upholding commitments to international conventions. European policymakers would be well advised to avoid any offers to replicate Australia’s ‘successful’ approach and instead engage in dialogue with transit countries and formulate regional responses that rest on refugee protection.

Melissa Phillips is an Honorary Fellow at the University of Melbourne and works for the Danish Refugee Council in Amman, Jordan.

Antje Missbach is a Research Fellow at Monash University.