Putting guns away for good

A decline in private firearms ownership and no recognisable gun culture means that Japan is positioned to be the world’s first country to reverse the gunpowder revolution, writes Aaron Karp.

Four-hundred years ago Japan eradicated virtually all firearms. Today the country may be on the cusp of an equally far-reaching, albeit far gentler, transformation.

Although Japan’s private gun ownership rose during the 20th century, today’s levels are not just small but rapidly declining. This is in contrast to annual sales of roughly 20 million new firearms across the globe. Japan stands out as the one large country where the trends are unambiguously down, and in fact, ownership is even lower than widely thought.

However, Japanese weapons data must be read carefully. Official police statistics combine firearms, air guns, construction guns as well as swords and starter pistols. For meaningful international comparison, these factors have to be teased out.

According to the Keisatsu Hakusho (Police White Paper), gun ownership rose until 1978, peaking at 741,500 registered firearms. After a series of legal reforms that year, ownership began to decline, initially by almost 10 per cent annually. In the last five years for which data is available (2011-2016), the rate of decline averaged six per cent annually. In 2016 there were a total of just 175,221 legally owned private firearms in all of Japan. (Click here to see Figure 1). 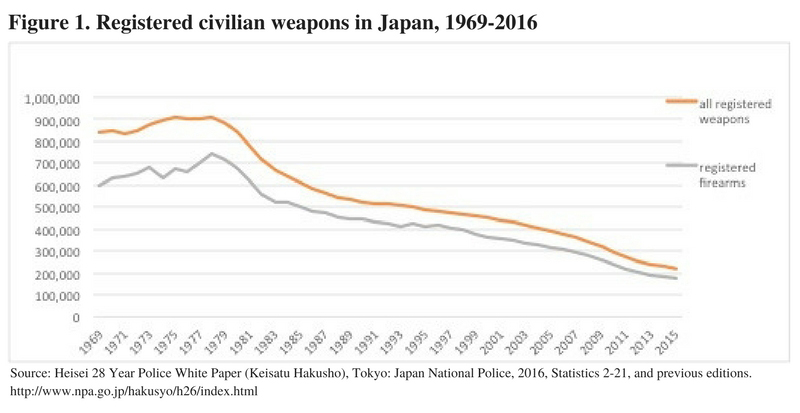 To put this in perspective, Australia, despite several massive disarmament programs, saw private gun ownership rise by 190,000 during the same five-year period. Australian citizens currently have some 3.15 million legally owned firearms and at least 300,000 unregistered guns. In the United States, there are approximately 350 million privately owned firearms. America has roughly 110 firearms for every 100 residents and Australia 15 per 100. Japan has one gun for every 500 people.

The effects of gun scarcity are profound. Crime is exceptionally low, especially homicide and murders with guns. In recent years murders have fallen rapidly and firearms murders are all but unknown, typically fewer than ten annually. Again, official data is tricky; Japanese law categorises attempted murder as homicide. Figure 2 shows the total number of homicide victims—less than half the number of legal homicides—but still may include some only injured. (Click here to see Figure 2). 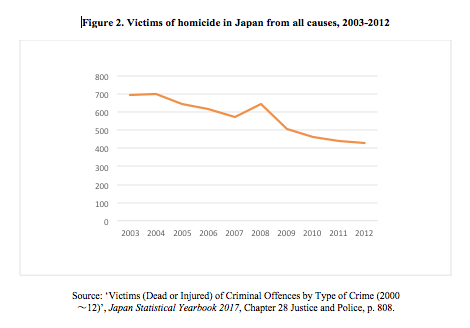 A major public issue since the 1980s has been the firearms of Yakusa gangs. Japanese police made disarming the Yakusa a high priority. The efforts largely succeeded. Seizures of Yakusa guns peaked in 1995 at 1,396. In 2015 only 63 Yakusa firearms were seized. While latent demand may remain, not many weapons appear to be getting through to Japan, even from well-known gun smuggling centres like China, the Philippines and the United States.

While gun rights advocates in the United States insist that nothing can be learned from Japanese firearms precedents, there also are valuable lessons for other countries. Japan appears to be exceptionally successful, for example, in minimising gun smuggling. Strikingly few guns penetrate law enforcement barriers, even compared to other island countries like Australia, Caribbean states or the United Kingdom.

This may be partially because demand is low. Compared to most of the world, Japan does not have a recognisable gun culture, with buffs hanging out at the shooting range. Not only are firearms unusual, Japanese people do not seem very interested in them. News reports about domestic gun trends or gun crime are hard to find; I’ve looked. A typical Japanese report about firearms almost always is about foreign terrorist assaults or shootings in the United States. America is Japan’s gun news.

The exceptions are notorious gun crimes. Like elsewhere, framing incidents like these capture public impressions and arouse demands for reform. A publicised shooting, like the 1979 Mitsubishi Bank hostage incident, or the shooting death of the mayor of Nagasaki in 2007, invariably leads to legal reforms. It is the same in other countries. The difference is those framing incidents in other countries tended to be much worse and the effects on total gun ownership are more temporary. This was the case with the 1996 Dunblane school massacre in Scotland, when 16 kindergarten students and their teacher died, or the Port Arthur massacre in Tasmania when a lone gunman killed 35 that same year. In Japan, much smaller crimes seem to provoke more enduring effects.

With the state committed and the public supportive, Japan is certain to see further declines in private gun ownership. More than any other country, Japan may be nearing an outright reversal of the historic gunpowder revolution, the defining Chinese-European innovation that helped end the medieval world, and which transformed Western civilisation and affected every corner of the world. If any country is poised to eliminate firearms in civil society, Japan is. Should Japan approach that point, the rest of the world would be well advised to pay careful attention.

Aaron Karp is Senior Lecturer at Old Dominion University in Norfolk, Virginia, and Senior Consultant to the Small Arms Survey in Geneva, Switzerland.