Is Australia doing enough to help the region's refugees, and if not, why not?

While Australian policymakers argue that turning back asylum seeker boats is the best way to save lives, society will never grapple with the hard regional questions of how to help people fleeing war, persecution and climate change, Father Rod Bower argues.

The third weekend in July was a time of both surprise and contrast for me.  This seemed to be mirrored in much the same way, on this same weekend in Australia as a nation.  Two experiences led me to reflect on the often-latent racism that lies in the dark shadows of our national psyche, and the effect that this has on our policy-making decisions.

On Saturday morning I attended, by invitation, a local mosque to participate in the festival of Eid. I was met by a generous welcome, overwhelming hospitality and joyful celebration. I experienced a diverse, multicultural community from extraordinarily varied ethnic backgrounds. I asked the visiting Imam where he was from. “Pakistan? Iran? Egypt?” “Yorkshire,” was his amused reply. This joyful, open generosity is for many Australians the unknown side of Islam.

On the Sunday morning I attended a local Christian church to conduct a consultation. Here I encountered a monochrome community struggling to find a future. At one point I was actually threatened with violence. For me, this was symbolic of what was happening that weekend in the wider community.The shadow side of Australian ‘Christian’ culture showing its violent underbelly through the ‘Reclaim Australia’ movement, while the Muslim community quietly kept their heads down and marked the end of Ramadan.

These may have been two isolated events on a weekend, but they point to a much more common theme played out again and again in Australian suburbs. Perhaps most recently and most poignantly this has been seen in the racist response of football crowds to Indigenous athlete and Australian of the Year Adam Goodes.

When it comes to developing viable social policies, especially relating to refugees, we have a problem. The issue lies at the heart of the Australian identity; racism and bigotry still hold political power by dominating our national psyche. The all too recognisable mantra of “I’m not a racist, but….” continues to frame almost every sentence on the subject of Islam and refugees; erroneously assuming the two are synonymous.  The justification that Islam is not a race, therefore islamophobia is not racism, totally misunderstands the reality that all forms of racism have their genesis in the irrational fear of the ‘other’.

The shadowy truth of our humanity is that we have this innate fear of difference; part of what has enabled our species to survive and flourish. However, that which has facilitated our thriving may well now accelerate our destruction. We have perhaps, in this now globalised community, evolved beyond the need for this mechanism, and we may hopefully be witnessing the last gasp of a soon-to-be-extinct strain of Homo Sapiens.

The national Labor Party Conference of 2015 did nonetheless indicate that there is still power in the dying gasps of the old paradigm. The conference, sensing the still dominant and controlling shadow of racism, affirmed a refugee policy that is in the long term, unsustainable and destructive. The resolve of both major Australian political parties to ‘turn back the boats’ can only result in negative outcomes for our nation and asylum seekers alike. It certainly does not result in the saving of lives; asylum seekers simply drown somewhere else.  It also disables the development of other policies, which are both economically and socially sustainable. 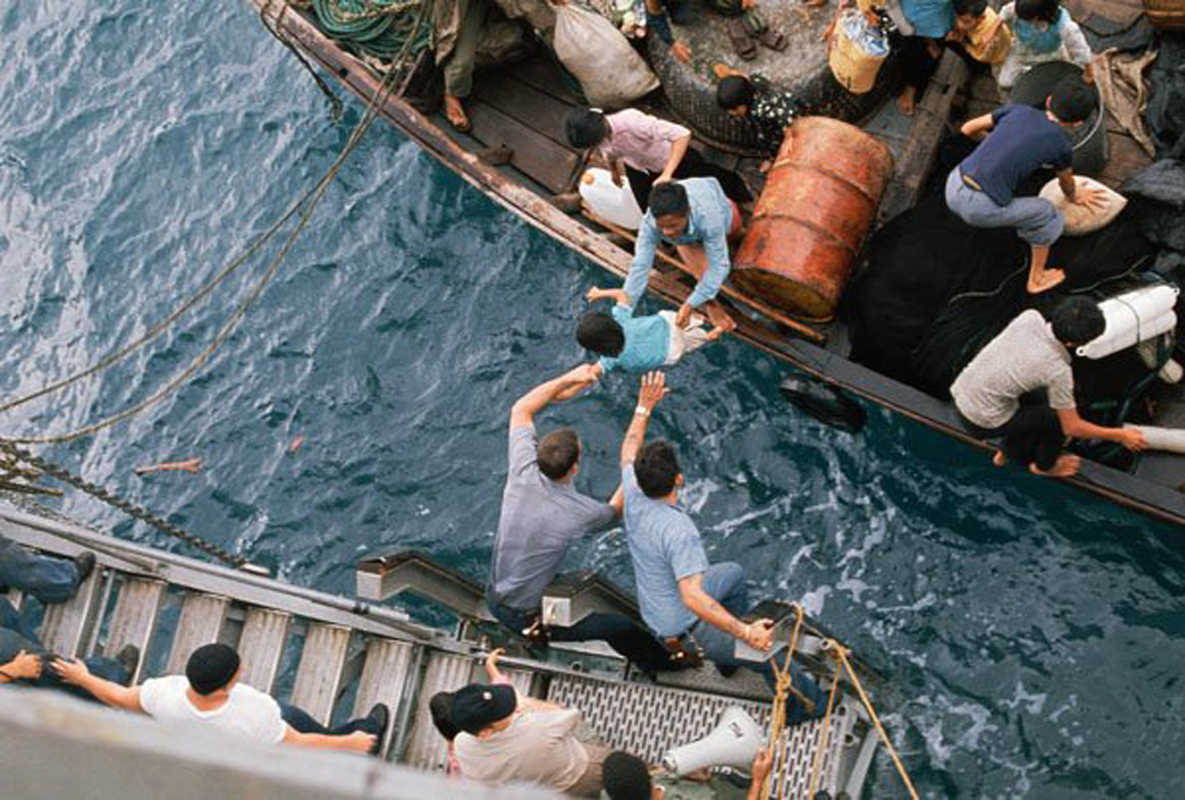 Of course, supporters of the policy on both sides will claim that racism has nothing to do with it. They might point to the reduced numbers of ‘maritime arrivals’, or fewer terrible on-sea incidents where desperate people lose their lives and say that the policy, however inhumane, is successful in its aims. The soul-searching that accompanied the Labor vote to affirm the boat turn-back policy highlighted that not all who may vote for the policy feel comfortable about it.

But the policy itself is a manifestation of racism; it’s the fear that without strict border controls we will be swamped by the ‘illegal others’. While we allow the shadow of racism, the irrational fear of the other, to be the true foundation on which such policies are built, we will continue to damage our international reputation and deny the worldwide community the gift of leadership that Australia has the ability to offer and has, in our better moments, so productively contributed to global conversation.

While we deny our racism and continue to argue that turning back the boats is the best way to save lives, we will never grapple with the hard regional questions of how to facilitate life-giving solutions for people fleeing war, persecution and potentially, altered circumstances due to climate change. It is not until we are able to acknowledge and deal with our xenophobia that we will be able to see it for what it is, irrational.

It is at this point, only with the help of courageous and trusted leadership, that we will be able to facilitate the sustainable movement and settlement of refugees throughout the Asia Pacific region. This can only be achieved by adequate funding of the UNHCR so that it can productively meet the challenges placed before it.

The Government has announced that in the 2014-15 financial year, it will maintain the annual intake quota under the Humanitarian Program at 13,750 places. Of these, 6,000 visas will be given to refugees that are resettled to Australia with assistance from the UNHCR. For a developed nation with Australia’s resources this figure cannot be considered respectable by any measure. For there to be any semblance of justice for refugees it is imperative there be realistic intake quotas in developed nations.

Retired Major General Jim Molan, a trusted advisor to Tony Abbott, said in a recent ABC interview that nations will fail to deal with the refugee issue until they realise it is all about border protection. This may play well to the neo-nationalist agenda, but it does nothing to facilitate sanctioned, safe and organised movement of people across international borders. A willingness to acknowledge these borders do not hold the same meaning as they once did is also necessary.

Interestingly, these borders easily dissolve when it comes to free trade agreements; however they take on irrational importance when a leaky boat with several hundred dehydrated, frightened men, women and children suddenly appears on the horizon.

When we as a people can come to know ourselves, and have the courage to elect leaders who can articulate the truth of our evolving narrative, we will find ways of implementing sustainable solutions to the refugee crisis.

This however cannot, and will not, happen until we have the insight and self-knowledge to change our shadow mantra to a new and truthful, “I am a racist, but…”.  Here we will discover that the shadow, having been exposed, no longer has the power to define our truth. Then we will have evolved into a new way of being.

The Venerable Rod Bower is Archdeacon of the Central Coast in New South Wales and an ambassador for the Refugee Council of Australia.