Refugees and an avalanche of numbers

Syrian refugees on the Jordan border have a less than one per cent chance of resettlement through pre-arranged quotas with countries such as Australia. What happens to the 99 per cent?

As Australia begins to resettle 12,000 Syrian and Iraqi refugees, research paints a grim picture of the fate of millions more, write Claire Higgins and Rawan Arar.

As Australia begins its resettlement of 12,000 Syrian and Iraqi refugees, news has emerged that the same number of Syrians are currently stranded on the Jordanian border, seeking to join over 630,000 refugees already hosted in that country.

Yet even if they cross the border into Jordan, these refugees will still have a less than one per cent chance of securing a resettlement place through pre-arranged quotas in countries like Australia. Their plight should prompt a reflection on the reason why Syrians – or anyone else fleeing persecution – may choose to seek refuge in Australia as an asylum seeker.

When Australia’s pledge to accept 12,000 Syrian and Iraqi refugees was announced in September this year, it was described by the government as ‘a generous, prudent and proportionate response by a decent and compassionate nation’. Australian officials would select individuals who had registered in the region with the UN refugee agency, the United Nations High Commissioner for Refugees (UNHCR).

Meanwhile, before and after that announcement, the Department of Immigration returned a Syrian and an Iraqi man who had fled to Australia by boat. These individuals were returned to the very countries from which they fled, a measure in direct disregard of the foundational principle of non-refoulement under international law.

Is Australia doing enough for refugees?

There are reportedly a number of Syrian and Iraqi asylum seekers still held on Nauru and Manus Island. They include a father and his five sons, whose mother remains in Syria. Yet the Australian government has justified the direct contrast between their prolonged detention – with no guarantee of permanent settlement – and the resettlement of others fleeing Syria, with the argument that Australia would seek to ‘keep people-smugglers out of business’. This is despite the fact that Australian authorities are understood to have paid cash to people-smugglers to encourage them to turn boats carrying asylum seekers back to Indonesia.

Syrians held in Australian-run detention centres are likely to have experienced the same fear of persecution as their refugee counterparts in the Middle East. Indeed, most Syrians are considered to be refugees by the United Nations refugee agency, UNHCR, recognising the objective conditions in their countries of origin that give rise to a fear of future harm. The only apparent difference between those Syrians identified as refugees in the Middle East and those Syrians held on Manus Island and Nauru is their ability and willingness to move in search of protection. 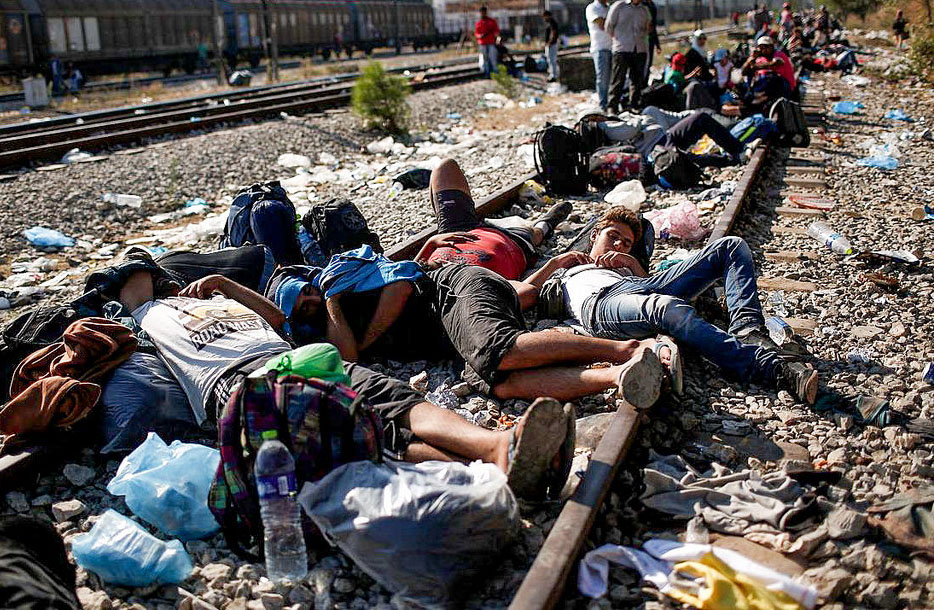 Syrian and Iraqi migrants sleep on railroad tracks waiting to be processed across the Macedonian border in Idomeni, Greece. Image by Freedom House on Flickr. https://www.flickr.com/photos/syriafreedom/20643324713/

While refugee movements yield challenges for Europe, Australia, and North America, the vast majority of refugees are hosted in developing countries. Since the start of the Syrian civil war in March of 2011, over 95 per cent of the over four million displaced Syrian refugees are hosted in the Middle East, with Jordan being a primarily refugee-receiving state. Jordan has accommodated generations of refugees from Palestine, Iraq, and now Syria, for approximately 70 years. Jordan’s population has increased by at least 10 per cent since the country began hosting Syrian refugees. While 630,000 Syrian refugees are currently registered with the UNHCR in Jordan, Jordanian estimates place the number of Syrians in Jordan as high as 1.4 million.

While education, water, and food are guaranteed in refugee camps, resources remain insufficient and some refugees face food insecurity even with the support of aid organisations. Still, in theory, camp living may offer increased and more dependable access to resources. For example, in 2015 the World Food Programme was forced to greatly reduce food aid and prioritise food allocations for those in camps over those living outside of camps.

The majority of Syrian refugees outside of camps live below the Jordanian poverty level. Children in urban areas often forgo educational opportunities because their families need them to work. Despite diminished guarantees to resources, approximately 85 per cent of Syrian refugees in Jordan live outside of camps. Urban-settling refugees may be motivated by greater freedom of movement and the ability to access what is often unauthorised employment.

Two-thirds of the world’s approximately 20 million refugees live in protracted refugee situations defined by at least five consecutive years of displacement. But on average, refugees spend 17 years uprooted. This is no doubt just one of the reasons why the family of five Syrian refugees who were recently resettled in Australia wanted to thank the Australian people ‘for a chance at happiness’. Their message was publicised by the Department of Social Services, whose Minister told the media that the Syrian father had a simple wish for his new life: ‘to educate his kids, live safely, get a job and live in peace’.

Despite Australia’s generous resettlement program, and tens of thousands of places allocated for Syrians by the United States, Canada, and many other countries in Europe and Latin America, these resettlement places will aid just a fraction of the more than four million Syrians who have fled their country. In the face of such odds, it is little wonder that some refugees will move farther afield for their chance at happiness, free of persecution.

Rawan Arar is a PhD candidate in sociology at the University of California, San Diego and a researcher at the Center for Comparative and Immigration Studies.