Riverside festivals like Kumbh Mela (religious fair) are referenced several times in India’s ancient texts. In addition to its religious and cultural significance, the mela is also acknowledged as an important commercial event. Kumbh is held every 12 years at the four sites of Prayag (Allahabad), Haridwar, Trimbak-Nashik and Ujjain. Known historically for its stampedes and sectarian politics, modern day Kumbh is fast embracing its commercial avatar.

The collective business worth of last three Kumbh Melas at Allahabad (2013), Nashik (2015) and Ujjain (2016) was around Rs. 33,000 crore ($5.5 billion USD) and involved planning to receive some 220 million visitors. Kumbh is attracting more visitors each year, and they come with expectations of improved services. The mela, a 2000-year-old human conglomeration of spirituality, is spearheading the use of technology to plan and execute what is a mammoth logistical task.

Entrepreneurs, innovators and technocrats are working with mela managers to devise and test new solutions to persistent problems, raising the bar for safety at these huge events and enhancing the visitor experience.

Technological innovation has proved particularly effective in better and more safely managing the gargantuan mela crowds which pour in during the month-long festival, with higher turnouts during auspicious bathing dates.

The locations and vast crowds need to be managed carefully during the event to avoid stampedes. Police surveillance in both the Ujjain and Nashik mela events made extensive use of closed-circuit television (CCTV) and centralised public announcement systems connected to loudspeakers installed across the city. Biometric attendance systems scrutinised access to mela personnel and uninterrupted video conferencing kept them connected with intra- and inter-city management teams. Satellite towns erected on approach roads towards mela cities tracked vehicle congestion through cameras and reported back to control rooms.

In Ujjain, four drone cameras, 256 watch towers and 481 CCTV cameras at 125 different locations formed part of the round-the-clock monitoring. The real-time feed was transmitted to a central control room through a high-speed optical fibre network. CCTVs at 11 entrance gates tracked visitor counts on normal and special days. Headcount cameras were used to manage crowd flow and divert people to other locations in case of congestion. The public telecom operator (BSNL) provided the police with a dedicated network to monitor crowds, free from any disturbance or congestion. 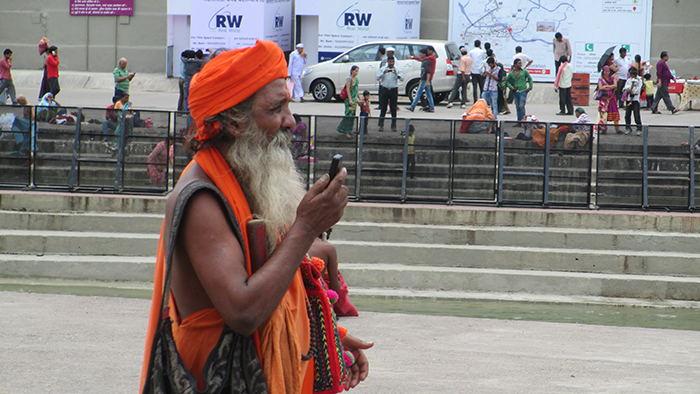 A Sadhu using his mobile phone during Nashik Kumbh 2015 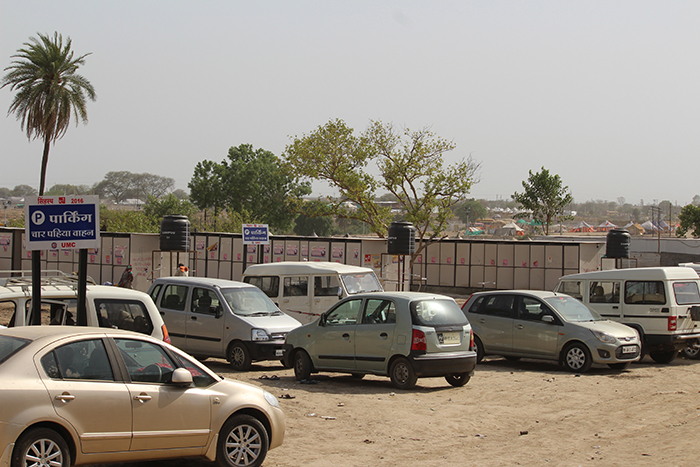 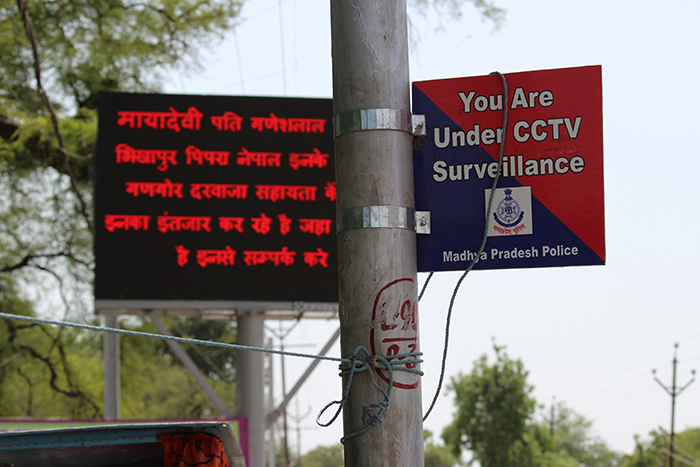 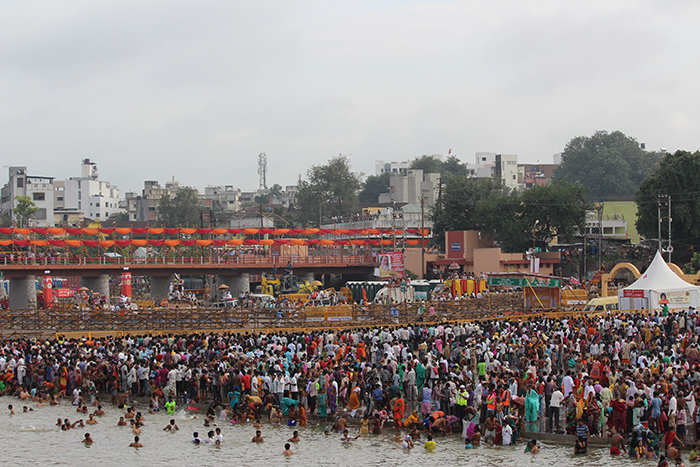 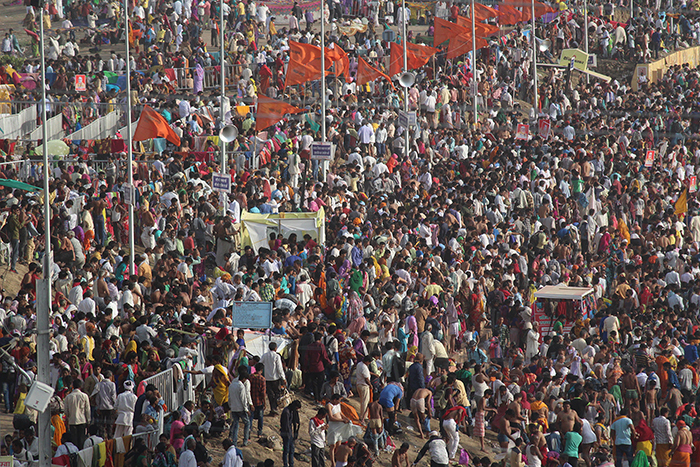 The Nashik mela also relied on CCTV cameras and experimented with analysing crowd density by using mobile phone signals reported by mobile towers in the city. The surveillance was extended to the satellite parking areas and provided information for several kilometres beyond city limits. Video walls at various places helped visitors gauge crowded areas and plan their routes accordingly.

Both Nashik and Ujjain had official mela apps that provided information on procession routes, ghats, township maps, parking and updates on traffic, hotels and public transport.

The safety of visitors at mass gatherings is of utmost significance for organisers. Here too, technological advances have significantly ameliorated festival outcomes. The Nashik mela experimented with a wearable SOS Device-based solution which, when pressed, immediately sends a message to the central emergency services dashboard. The Ujjain official mela app included a panic button, which could be used during emergencies to alert police at central control. Ujjain had 10,000 uniquely numbered electric poles connected to central control room through GIS mapping, enabling the location of the alarm to be pinpointed and guide the police response.

Khandbahale, a Nashik-based innovator, led a group of techs in partnership with the Massachusetts Institute of Technology (MIT) to develop a series of mobile apps that helped tackle problems of crowd management, epidemic outbreak prevention and mapping Nashik. Sachin Pachorkar, a management professor at a local college, encouraged innovation by crowdsourcing ideas. The team received around 850 pitches from different engineering colleges in and around Nashik. Subsequent innovation camps helped translate these ideas into practically applied solutions.

Innovative technology was also employed at the Nashik Kumbh to better communicate with pilgrims.

The Nashik and Ujjain experiences demonstrate how modern technologies have contributed significantly to enhancing crowd management, extending better civic services and improving preparedness in the continuously expanding Kumbh festivals. While the public sector is usually slow to adopt new trends, Kumbh managers have turned out to be fast learners and impressive implementers. They are quickly embracing technology to improve citizen experience.

It is an experience that should now be extended to other urban centres. Cities can pick locally developed low-cost technology-based solutions that can be easily scaled up as more users connect to a system or make use of an app. Crowdsourcing ideas for technology-based solutions appears promising in gauging interest levels of the private sector, civil society and innovators.

In a recent survey, India reported one of the highest levels of respondents who own a non-smartphone cellphone at 61 per cent. While smartphone ownership is low at 17 per cent, it is expected that a growing trend towards low-cost smart phones will bring critical mass to the sector and create more users. Customised apps, cloud telephony, cashless transactions, biometric systems, GIS mapping, transport surveillance and a range of other solutions at Kumbh can provide valuable fodder for city managers looking to progress ideas that make their cities smarter.

The temple towns of Kumbh are acting as breeding grounds for urban entrepreneurs who are providing frugal solutions for transportation, safety, civic amenities, emergency services and automating local business. As our urban centres incubate new ideas, technology is set to change the thinking on sustainable urban development across India.

Chandan Chawla is an architect and urban planner with research interests in smart cities, urban reforms and participatory planning.