Multinational military activity is often fractious and complicated by multiple and overlapping chains of command. But recent international efforts to curb Somali piracy offer some lessons for improving co-operation.

The international effort to stop Somali piracy at sea has been a striking success. Three multinational missions have been co-ordinating efforts with other independent states to provide safe passage for shipping off the Somali coast. The EU, NATO, and the US-led Combined Task Force-151, joined by states like China, Russia, and India, have been providing patrols, assisting ships at sea, and arresting pirates.

Somali piracy picked up pace in 2008, and by 2011 was beginning to look like a severe and impossible problem, with 174 attacks despite international control measures. British Prime Minister David Cameron described pirates as a “complete stain upon our world”.

However, by 2012, attacks had dropped to 35; in 2013, seven; and in 2014, two. International efforts, combined with better practices on board ships, have worked so well they have almost brought Somali piracy to an end.

Perhaps even more remarkable has been the success of an extremely unconventional form of military co-operation, which has allowed disparate states who are opposed in other contexts to work together with great success. This is all the more interesting because multinational military co-operation is typically very difficult, and causes high levels of frustration for states.

As the commentator Nora Bensahel has noted, it is very difficult for these multinational missions to become more than the sum of their parts. In theory, the combined power of multiple militaries ought to exceed the power of individual states. However, this is often not the case.

Multinational military activity is characterised by friction, confusion, and challenges created by multiple and overlapping chains of command. States participating in missions like NATO’s ISAF intervention in Afghanistan often put their troops under ‘caveats’, which prevent their contingents from participating in some activities. The general consensus is that the only way to overcome difficulties of multinational military co-operation is to unify command, placing all states under the authority of one; to make military co-operation as hierarchical as possible; and to ensure that all states operate in similar ways.

However, maritime military co-operation in the Indian Ocean tells a different story. Navies have been highly successful in reducing pirate attacks by creating a highly informal network that allows multiple chains of command to flourish, and discourages the development of hierarchies. How has this been possible, and might it pose an interesting alternate conception of military co-operation? 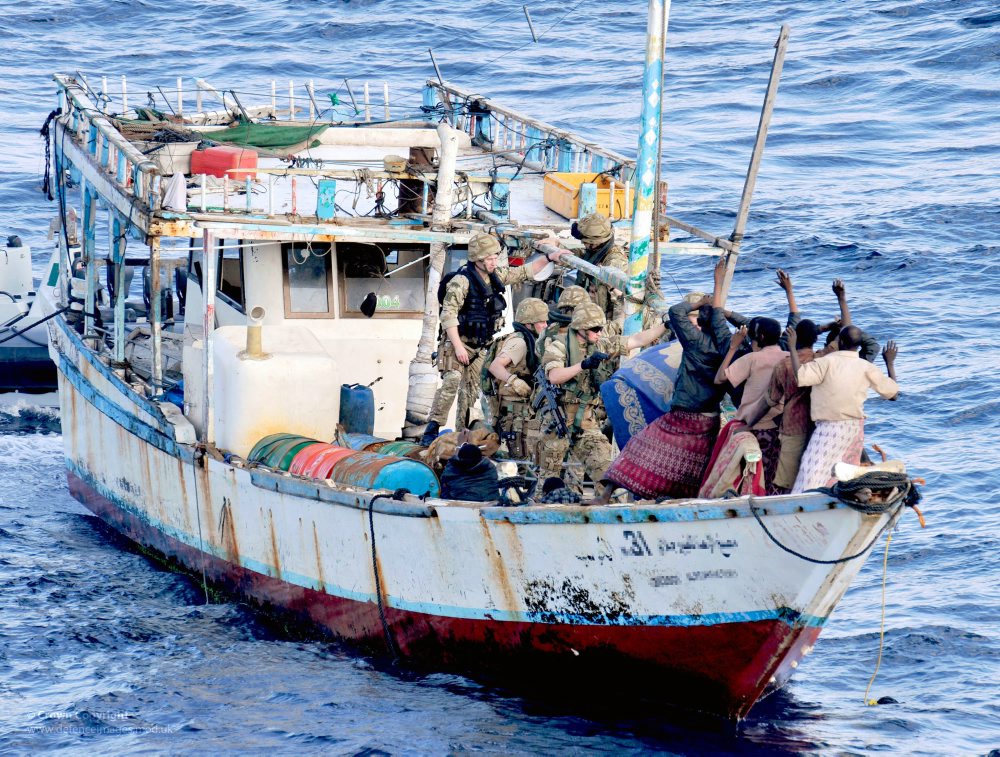 Photo by UK Ministry of Defence on Flickr: https://www.flickr.com/photos/defenceimages/7591505614/

The naval missions in the Gulf of Aden and the Indian Ocean work to control piracy in a relatively simple fashion. Vessels wishing to move through the area are encouraged to use the Internationally Recognized Transit Corridor (IRTC), a modified convoy system. Vessels begin their transit at an appointed time, and naval vessels are spaced out around the corridor and can come to the aid of attacked ships. In addition, naval vessels patrolling the area relay messages about potential pirates and can stop pirate boats at sea.

For this system to work, the more navies that have ships in the area, the better. The maritime space in question is vast. Pirate attacks have occurred as far west as the Seychelles and as far south as Madagascar.

But how can so many navies, from so many states, co-ordinate their efforts to work together? Placing all navies under one command would be impossible, as it would reduce the available numbers of ships whose home states are unwilling to be under the command of another. At the same time, communication is very difficult because open radio communication can be overheard by pirates, and yet sharing secure communication between, for example, a British vessel and a Chinese vessel is also impossible.

Navies have devised some innovative solutions to allow co-operation to remain informal, without command structures or hierarchies.

First, all interested parties (both military and civilian) meet in Bahrain quarterly for SHADE (shared awareness and deconfliction) meetings. These allow all actors to exchange information, and discuss potential problems.

Second, navies have adapted an online chat system called Mercury Chat that allows all vessels engaged in counter-piracy to coordinate efforts without requiring sharing secure communications. Mercury Chat is not unlike Facebook Messenger.

How has this fluid form of co-operation been possible? There are four major reasons.

First, piracy is a ‘Goldilocks problem’. It is just serious enough to capture the attention of the international community, but not so serious that national capitals will seek to manage all aspects of counter-piracy.

Somali piracy takes place in a strategically significant area that many states would wish to patrol anyway. Despite alarmist headlines, even at its peak, less than one per cent of shipping transiting the region was attacked by pirates (but a great many more ships had to take special measures to avoid attack).

Second, piracy has always been a problem ‘of the commons’ that has historically required collaborative efforts to control. Because it occurs on the high seas, many states have had to co-ordinate efforts to stop it.

The Barbary corsairs, pirates who operated in the 19th century Mediterranean, were ultimately controlled by a group of states including the United States, the Netherlands, and the United Kingdom. Moreover, the vast distances involved mean that many ships must participate, as it is impossible to cover the area without a large number of vessels.

Third, unlike multinational missions on land, the legal framework for piracy is clear. As a result, states do not have to negotiate their participation or interpret the rules in different ways. If states do not wish to engage in a particular action, the non-binding character of counter-piracy means they can opt out without difficulty.

Fourth, navies have an unusual history of co-operation and similarity that marks them out as different from land forces. Navies have all developed following first the British, and then the American model. All navies operate in the same ‘terrain’. Accordingly, they are similar entities. Navies are accustomed to relatively autonomous decision-making, as historically distance from national capitals required such autonomy. And finally, vessels at sea will come to the aid of any other vessel. The ‘maritime code’ and sense of familiarity makes cooperation easier.

Could this successful model of co-operation be applied elsewhere?

To an extent, piracy is a unique problem. Somali piracy occurs in a strategically sensitive area, and all the factors outlined above are relatively unique to the maritime domain or to piracy. That being said, military cooperation to provide aid after the Asian tsunami of 2004 took a similar form. During the first Gulf War, a communications centre, the C3IC, had to be set up in such a way that 34 different contributing states could share information.

It may well be that these sorts of missions are the future of naval co-operation. As navies increasingly counter unconventional threats such as people smuggling, illegal, unreported and unregulated fishing, and narcotics trafficking, they will be working in a maritime domain on other Goldilocks problems.

Accordingly it is crucial for policymakers to have a better understanding of what makes this type of naval co-operation work and how it can be applied elsewhere.

Sarah Percy is Associate Professor of International Relations at the University of Western Australia.