As the sun sets on another decade and a new one rises, the frantic pace of modern sport seems unrelenting, and nowhere more so than in Japan. Indeed, having just hosted the 2019 Rugby World Cup, Hinomoto-no-Kuni heads into 2020 as the host of perhaps the world’s biggest sporting mega event, the Olympic and Paralympic Games.

Across in West Asia, fresh from its hosting of the world title boxing bout involving Andy Ruiz and Anthony Joshua, Saudi Arabia will presumably continue to vigorously pursue its policy of investing in sport.

One of Saudi Arabia’s Gulf neighbours, Abu Dhabi, finished 2019 by engaging in some of its own intriguing sports investments. Most notably the City Football Group (CFG) – state owners of Manchester City, announced in consecutive days a new investment partner and an intention to establish a franchise club in India.

Manchester is an interesting place, and not just because of its football teams. The city is fast emerging as a digital hub, which is often linked to sport. For instance, US corporation Fanatics International (a global leader in the online sale of sports merchandise) has established a major presence in the city as it pursues significant international growth across Europe and Asia.

The digital sector already has a massive influence on the global sport industry’s growth and development. However, Fanatics’ presence in the eastern side of post-industrial Manchester is particularly striking, as it is located in an area that forms part of real estate developments that are being funded by the Abu Dhabi government.

This is important, as what becomes clear upon closer scrutiny of the contemporary sport industry landscape is just how interconnected everything seems to be. However, this is not just about an America online retailer and an oil-rich Gulf nation, there is much more to this story.

In setting out to examine this landscape, we did so knowing that a Japanese multinational conglomerate holding company, Softbank, has been playing a significant role in Japan’s hosting of sports mega-events. Headquartered in Tokyo, the company was founded by Masayoshi Son, who still remains its CEO. Over the last decade, Son has emerged as someone with canny foresight and a keen eye for successful investments.

We also knew that Softbank has close links to the Saudi Arabian government. Indeed, it has been working with the kingdom’s Public Investment Fund to identify potentially lucrative overseas investments. The aim of this has been to productively utilise Saudi Arabia’s oil and gas revenues whilst reducing its over-dependence on them.

However, it was only when we began to visualise Softbank’s network did we realise the sheer scale, complexity, and interconnectedness of global sport. The investigation didn’t just reveal the extent of Softbank’s relationships, it also highlighted links to countries, such as Abu Dhabi, to a multitude of sports (for example, the Olympics, football, and baseball), and to other private investors including Endeavour and Silver Lake. 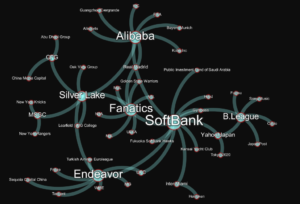 The appearance of Silver Lake, a US-based private equity firm, in our Softbank network was surprising, though it did so for two principal reasons. Firstly, both companies have invested into China’s Alibaba, a business that in turn has itself invested into sport – through UEFA and FIFA sponsorship deals, and via part ownership of Chinese Super League club Guangzhou Evergrande.

Secondly, Silver Lake and Softbank have also invested in Fanatics. Our observation of this is very timely, as a little over a month ago the US private equity firm acquired 10 per cent of CFG for $500 million; this coincidentally now values the football franchise network at $5.3 billion. At this point, it seems worth reiterating that Manchester City and Fanatics’ UK HQ are located little more than a mile away from each other. Silver Lake holds a share in both.

What a doping ban means for Russia

Amongst the links between these various entities, sport, digital technology and entertainment are all evident. So too are the connections between East and West Asia, Europe, and the US. One sees this as well in the activities of Endeavour, which has offices in the UK, another private equity firm that promises to ‘drive value for the future through hands-on investment’. Remarkably, Silver Lake and Softbank have also invested in Endeavour.

And across the network, famous names from the world of sport appear again and again: Bayern Munich, the New York Knicks, the UFC, the NFL, and many more. Each of them either partly owned by or otherwise engaged in sponsorships or other commercial activities with firms that make money by taking a punt on the next big thing.

In some respects, this should perhaps be no surprise. After all, it is commonly known that sport, technology, and entertainment are converging. For example, as digital platforms emerge, they are creating opportunities for content generation, for the sale of merchandise and services, and have slowly started to usurp traditional forms of broadcasting. Over time, sport has become deeply embedded in and central to this process.

hat is most striking and probably unbeknown to most fans worldwide is how much of sport globally is now owned or underwritten by private investment firms. Gone, apparently, are the days of sports teams being owned by community-minded, philanthropic local investors, and of big state broadcasters monopolising television coverage of sport for the benefit of society as a whole.

Instead, as our visualisation reveals, 21st-century sport appears to be under the control of a transnational elite that makes money from its investments in the sector. Some among this elite are from traditional capitalist heartlands like the US. Others, however, are from newly emerged nations. Often, they are wealthy individuals with very strong links to government and who invest on a state’s behalf.

Whoever they are and whatever their motives, it is clear is that sport now exists in a space where East and West intersect, where technology and entertainment converge and drive business, and where there is big money to be made from what were once simply socio-cultural pastimes. Furthermore, it is clear that geographical and territorial boundaries have crumbled, and that an international transnational elite now spans the sporting globe.

On this basis, as we go deeper into 2020, we therefore recommend that avid watchers of sport spend just as much time watching what happens off the field of play as what happens on it.