Studying Chinese research on the Pacific

Is surging academic interest a road to better policy?

Chinese academics have become increasingly interested in the Pacific and in improving China’s policy there as the country has become more invested in the region, Denghua Zhang writes.

As China’s presence in the Pacific region has increased, so too has the interest of its researchers and elite institutions. The Chinese Government and Chinese universities have rolled out a number of new programs to strengthen academic ties with the region, including a focus on raising awareness and knowledge of Pacific languages to serve its Belt and Road Initiative.

With this surging interest in the region, how are Pacific studies in China developing, and are the research interests of Chinese scholars intersecting with their country’s policy priorities?

By analysing journal articles published by China-based Chinese scholars of the Pacific between 2006 and 2019, as well as interviews with 44 of the authors, we can gain a greater understanding of how Pacific research is developing within Chinese academia and how policy needs influence research.

The data shows that Chinese researchers have become significantly more interested in the Pacific Island region in recent years. Between 2012 and 2019 the number of Chinese journal articles focusing on the Pacific grew from one to 35, as seen in Figure 1. This can be reasonably attributed to Chinese President Xi Jinping’s visits to Fiji and Papua New Guinea in 2014 and 2018, respectively, and the establishment of six Pacific research centres at Chinese universities.

Figure 1. Number of Chinese journal articles on the Pacific between 1996–2019 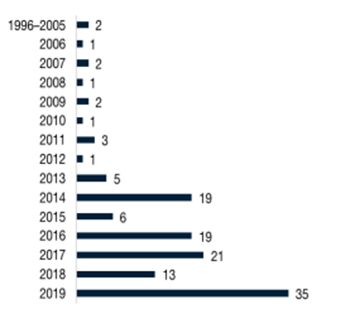 Between 2006 and 2019, Chinese scholars published a total of 129 articles on Pacific studies in Chinese journals. The themes of this research fall into four broad categories: China–Pacific Island country (PIC) relations, PICs, other powers in PICs, and China–other power relations in PICs.

Chinese scholars have devoted most of their attention to China–PIC relations as shown by Figure 2. Articles in this category focus on the Belt and Road Initiative, Chinese aid, and China–PIC cooperation in agriculture and tourism. This is strong evidence that Pacific research in China is largely policy-oriented.

Figure 2. Number of Chinese journal articles by theme between 2006–2019 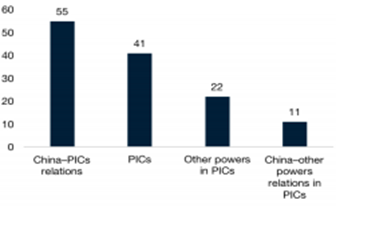 For example, Shi Yingli from China’s Liaocheng University identified weaknesses in Chinese aid to Samoa, such as overlapping of projects, the low ‘quality’ of some Chinese citizens working there, and a lack of attention to detail in aid provision. To address these issues, she suggested China set up a resident aid office in Samoa, provide tailored aid to meet local demands, and organise regular on-site inspections.

China’s media strategy in the Pacific

For example, Niu Li, Executive Director of the Pacific Research Center at Beijing Foreign Studies University, argued that in order to reduce Australia and New Zealand’s concerns about China’s rise in the Pacific, as well as for China’s own economic benefit, China should conduct more cooperation with these two regional powers, such as recruiting skilled Australian and New Zealand managers for Chinese projects.

These three themes all relate to foreign policy and account for 88 of the 129 Chinese journal articles analysed – nearly 70 per cent of the total. This attests the degree to which Chinese scholars are preoccupied with research on the diplomacy of China and other powers in the Pacific with the ultimate purpose of improving China’s Pacific policy-making.

The other main focus of Chinese scholars concerns domestic issues in PICs. The 41 articles in this category probed into a wide range of topics, including climate change, oceanic governance, fisheries, regionalism, agriculture, and economic development. Chinese authors are explicit about their intention to provide background research into these domestic matters in order to facilitate policymaking and offer policy recommendations.

An example of this policy-oriented research on PICs is the analysis of the trajectories of PICs’ economic development between 2004 and 2013 by two scholars from Zhejiang Ocean University. They proposed that China should deepen economic relations with PICs by increasing the awareness of Pacific cultures, expanding the scope of Chinese aid and highlighting mutually beneficial cooperation.

Chinese scholars are eager to increase the policy relevance of their research, grab the government’s attention, and boost their research impact. This is a result of the growing desire by government and academia to deepen the relationship between research and policy.

Another reason is that, Pacific studies is in its infancy as an area of study in China, and is fragile in terms of interest from both the government and the public compared with ‘more important’ areas of study, such as those on the United States, Europe, Asia, and Africa.

A lack of government and public interest would lead to less budget support, increase the difficulties of publishing on Pacific affairs in Chinese journals and reduce job security for scholars of Pacific studies. In this sense, conducting policy-related research is a survival skill for Chinese scholars.

This phenomenon is not unique to China, with Australian, American and New Zealander scholars – the three largest concentrations of Pacific scholars globally – also displaying various degrees of reliance on government support for Pacific studies.

The strong influence of policy on Pacific studies in China, however, does not suggest that Chinese scholars have no autonomy in research. On the contrary, many Chinese scholars conduct research on the region primarily out of genuine personal interest rather than for the benefit of the government.

Even for government-funded research projects, the funders – central government ministries or provincial governments – give the awardees the space to choose specific research methods and perspectives based on their own expertise and interests, as occurs in good universities anywhere.

ooking forward, Chinese scholarly research on the Pacific is likely to increase amid Beijing’s expanding engagement with Pacific Island countries. Government support and enhanced research capabilities will enable Chinese scholars to conduct more policy-related research, but whether this research will lead to tangible policy changes – a major common challenge for universities around the world – remains to be seen.

This article is based upon a paper published by ANU Department of Pacific Affairs (DPA) as part of its ‘In brief’ series. The original paper can be found here.

Denghua Zhang is a research fellow in The Australian National University’s College of Asia and the Pacific.