The challenge of the Colorado River

The Colorado River is under pressure.

The river straddles seven states in the USA and two in Mexico. Along the way it supports almost 5.5 million acres of irrigated agriculture, provides water for approximately 40 million people, and supplies over 4,200 megawatts of hydropower generating capacity.

But the river system comes with substantial challenges for policymakers, who have struggled to balance local interests with basin-wide objectives. On top of intensifying competition for water and the impacts of climate change, systemic risks and resource inter-dependencies of food, energy and water means that policy responses, while often well meaning, have sometimes been fragmented or even counter-productive.

The river has upstream reservoirs that store up to four years of the basin’s mean annual runoff to buffer against climate variability and sustained drought conditions – a prominent feature in historical records of the river. Projected climate change impacts include earlier snowmelt and decreased runoff.

Demand and drought put this already stressed river under more pressure. Shortage now looms as early as 2016 on the Lower Colorado. Below the Morelos Dam (the last major diversion used to deliver Mexico’s water allocation) the mainstem of the Colorado decreases to a trickle, reducing the delta to less than 10 per cent of its historic extent. 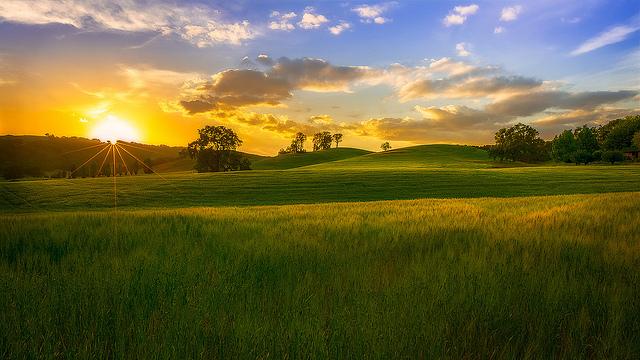 Water for irrigated agriculture represents 80 per cent of California’s water use. Image by Malcolm Carlaw on Flickr: https://www.flickr.com/photos/lightsamples/14245473056

One of those risks is water competition – from cities, farms, the environment and more. Water for irrigated agriculture represents 80 per cent of California’s water use, and droughts intensify competition among cities, agriculture and ecosystems. Water allocation policy has struggled to provide flexibility and appropriate incentives for conservation.

Another risk is that food production is ‘borrowing from the future’ by dipping into available groundwater faster than it can be replenished. Groundwater is a drought buffer that has key water and energy policy implications. Since 2011, central California has lost roughly 15 cubic kilometres in water storage each year, in large part to support a $45 billion annual agricultural economy. This is roughly equivalent to the storage contained in Lake Mead on the Colorado River.

A third risk is the use of the river’s water to supply energy, and the use of energy to supply water: energy-water tradeoffs. In California and other southwestern US states, the vast water system is also a major consumer of energy from source to end-use and through wastewater treatment, consuming 19 per cent of its electricity and 32 per cent of its non-power plant natural gas. Meanwhile, drought has diminished hydropower production and intensified the impacts of pollution from thermal cooling.

Despite the growing recognition of systemic risk and resource interdependencies, planning and policy have failed to stimulate systemic responses.

Recent long-term water planning in California and the Colorado River have started to address these deficiencies, particularly by accounting for climate change impacts, addressing groundwater regulation in California and considering water-energy and water-food interactions in brief detail. But these efforts are far from systematic, as illustrated by the inclusion of energy-intensive water importation schemes as viable solutions to supply-demand deficits in the Colorado River Basin, and the continued effect of insurance and subsidy programs under the US Farm Bill as a drought buffer and incentive for irrigation.

The deficiencies of current triage-based approaches from policymakers point to a number of challenges for the future of food, energy and water policy. But there are a few key steps they could take to better manage these challenges.

Second, the complex trade offs at play require new optics and indicators and new means for communication to make winners and losers visible and reframe the costs and benefits of inaction. Existing statistics struggle to capture distributional issues, and the role of hot spots (such as Fresno County or the Bay Delta) in large systems.

Finally, better planning will help identify where the most urgent gaps and tradeoffs merit the expense; after all, policy coherence involves high transaction costs.

Crises provide not only a window for change, but also the potential for maladaptation and triage-based responses that exacerbate systemic risks.

Managing systemic risk requires systemic response, and it will not be cheap. Science can inform these tradeoffs and ensure the investments food, energy and water policy have the highest return possible.

Professor Dustin Garrick specialises in comparative water policy at McMaster University, where he serves as the Philomathia Chair of Water Policy. He seeks to understand the drivers of and policy responses to the global water crisis.