What the country’s sports sponsorships suggest about Ankara’s ambitions

Turkey has a growing network of sports sponsorship investments that suggests the country is hoping to forge closer relations with Europe and beyond, Simon Chadwick and Paul Widdop write.

In 1993, when England’s Manchester United played an away game against Turkey’s Galatasaray in UEFA’s Champions League competition, the team was greeted at Istanbul Airport by group of Turkish fans carrying a large banner. Upon the banner were written the words ‘Welcome to Hell’.

For many observers, this episode epitomised what many at the time thought about Turkish football: passionate, intense, and forever dramatic. In 2018, a more nuanced and sophisticated assessment of Turkish football appeared in a cunningly entitled book: Welcome to Hell? In Search of the Real Turkish Football.

In the 25 years between that United match and the appearance of this book, it is debateable if the spirit of Turkish football has changed at all. As for Turkey itself, the country has experienced something of a turbulent recent history, and it appears forever torn between various incarnations.

One of these incarnations is in its geography. It stands as a crossroads where east meets west, between Europe and Asia, a view of the country that is at once cliched but at the same time a strategic and geopolitical reality. Some football fans might recall the ‘Bull of the Bosporus’ – a former player, Hakan Şükür (who coincidentally has now fled Turkey following political altercations with the strident government of Recep Tayyip Erdoğan) – but it is the river’s division of the two continents that remains of great geographic importance.

This divide is clear not just in the context of Turkey’s political and economic development, but also in terms the country’s engagement with sport and its use as a policy instrument. Turkey’s relatively near neighbours are conspicuous, sometimes highly aggressive, users of sport as the means to other ends.

To the north, the government in Russia has staged several mega-events over the last decade, including the football World Cup. In addition, quasi-autonomous state entities such Gazprom have become embedded in the global sport industry landscape (in the case of the gas corporation, through a series of sponsorships), something that has enabled them to serve Moscow’s geopolitical and strategic needs.

Turkey shifts focus to the East

To the south Turkey is closely allied with Qatar, a country to which it has remained steadfastly loyal throughout the recent and ongoing Gulf feud. Qatar is perhaps the biggest sports spender of them all, using its sports investments for ends ranging from soft power projection to geopolitical risk mitigation. Qatar Airways’ sponsorships of sport have been one platform upon which the country’s strategy has been built.

Saudi Arabia, an antagonist of Turkey, is following a similar game plan to Qatar. The government in Riyadh is devoting huge sums of money to investments in sport, a move that has proved as controversial as it has ambitious. Both regionally and internationally, the kingdom’s intentions seem likely to considerably up the ante.

In comparison with the largesse being displayed by its neighbours, Turkey’s government seems to have been a relatively slow starter in its engagement of sport as a policy and strategy tool. However, just as the country in general has changed over the last 25 years, so too has the way in which it sees the connections between sport, politics, and business.

In particular, our attention has been drawn towards organisations such as Turkish Airways and Turkcell, which appear in lists of the country’s top-10 most valuable brands. Crucially, both have established and sustained significant sports sponsorship portfolios, which we contend reflect, help to build upon, and strengthen Turkey’s strategic advantages.

In this context, we undertook a network analysis of Turkish organisations’ sponsorship portfolios. As in our previous analyses of other countries for Policy Forum, the network visualisation (see below) we have created depicts the most important nodes, connections and relationships in Turkey’s sports sponsorship network. 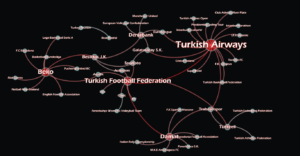 The standout constituent of the network is Turkish Airlines, a carrier that is effectively half state and half privately owned. This ownership structure is, in itself, an illustration of Turkey’s position at the crossroads of Asia and Europe. As in the case of organisations such as Dubai’s Emirates Airlines (which is 100 per cent owned by the government), Turkish Airlines’ operations are partly driven by political considerations.

The organisation has become an important symbol of Brand Turkey and is, indeed, the country’s most valuable brand by some considerable margin. At the same time, the airline forms the basis of attempts by Turkey to position itself as an air, industrial and economic hub. This is an increasingly competitive space in which to operate, though Istanbul is now rivalling transit hubs located in both Europe and Asia.

Turkish Airlines’ sponsorship activities reveal something about the parallel incarnations that characterise the country. There is a strong and an obvious domestic focus to the organisation’s sports sponsorships, something that is intended both to engage Turkish consumers and to support the country’s sport.

But also, the carrier’s network of sponsorships gives the sense of a country turning outwards to engage with the world. For instance, there is a relationship with the United States and the Superbowl. In other related examples, Turkish Airlines has also engaged in endorsement relationships with athletes such as Argentinian footballer Lionel Messi and the recently deceased American basketball player, Kobe Bryant.

Interestingly, Turkish Airlines’ connections with Argentina are evident in relations with the Buenos Aires based football club River Plate. And it is worthwhile noting that Los Millonarios’ intense city rivals, Boca Juniors, is sponsored by Qatar Airways. Turkey’s links with Argentina and indeed football are further strengthened by Beko’s sponsorship deal with Spain’s FC Barcelona (for which Messi plays).

Beko is owned by Arçelik A.Ş., which produces and sells durable goods, components, and consumer electronics. Arçelik operates in more than 100 countries including China and the United States through its 13 international subsidiaries and over 4,500 branches in Turkey. It not only sells under the Beko name but also others, including Grundig, Arctic and Flavel.

therwise, there are two things are about Turkey that require highlighting: firstly, the country and its sponsors do not currently seem to be looking East in their quest to build connections and relationships. This suggests that government in Ankara still harbours hopes of forging closer relations with Europe and beyond.

Secondly, the importance of football in Turkey remains obvious, albeit challenged by basketball (with which Turkish sponsors are also actively engaged). The sport is not only a staple of everyday life, it is a focus for and driver of the country’s economic and political activity. Turkey is no longer the football hell of 1993, instead it has fast become an important focus of a growing network of sports sponsorship investments.