With Australia scrambling to join another dogfight in the Middle East  – this time providing targeted air support in efforts to roll back the so-called Islamic State in Iraq and Syria – there is an inevitable sense of here we go again.

After all, there are wars of choice, and wars of survival. This isn’t about survival.

So why are we there? And more importantly, given that Australia does not face an existential crisis, can the public be convinced of the need for another operation in the Middle East?

As The Australian National University’s military historian John Blaxland argues in his book The Australian Army from Whitlam to Howard, ever since the Vietnam War the nation has suffered from a casualty cringe – a reluctance to lose lives in theatres of operation far from home, and which don’t directly threaten the survival of the nation.

But despite the spectre of Vietnam and, more recently, the bruising sustained in Iraq and Afghanistan, it would seem Australians aren’t afraid of war casualties.

That’s the finding from a major online survey experiment conducted by Dr Charles Miller from the ANU Strategic and Defence Studies Centre.

Between 1962 and 1972 Australia lost 500 soldiers in Vietnam, with more than 3,000 wounded.  The Southeast Asian nation’s suffocating deltas and jungles weren’t the only battlefronts, with opposition to the war and conscription ripping the nation apart. 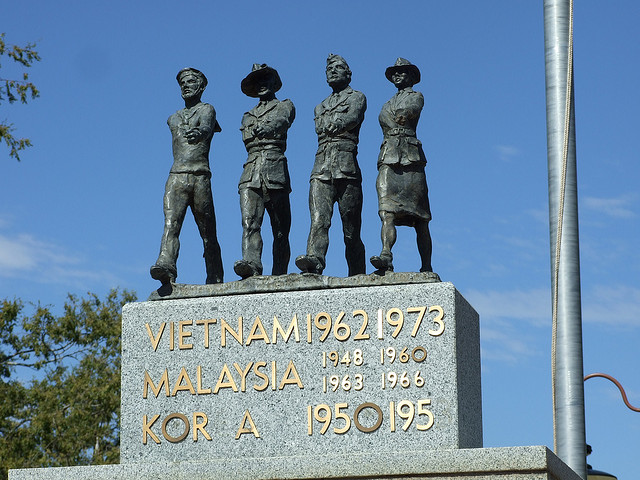 Almost as unpopular have been Australia’s 21st century adventures abroad in the Middle East – US-led operations in both Iraq and Afghanistan. Two Australian soldiers died in the six years after the 2003 invasion of Iraq, and 41 have been killed in Afghanistan since the war began in 2001.

These relatively low casualties were always a condition of Australia joining coalition forces. (In comparison the US lost some 4,400 soldiers in Iraq and 2,300 in Afghanistan).

In the post-Vietnam period an aversion to losing lives has long been considered a brake on Australian military operations overseas. Our lack of appetite for war and loss of life, has often left strategic thinkers and doers hungry; ‘casualty cringe’ is a major constraint on policymakers.

“The extent of the Australian public’s casualty sensitivity is a crucial question for Australian strategic and defence policy,” says Miller.

“Recent Australian experience in Afghanistan suggests that Australian policymakers certainly believe that casualty sensitivity seriously limits their strategic and tactical options.”
And as Miller points out some, like former Australian Defence Force officer James Brown, claim it is a bigger problem for Australia than for other countries.

“But the problem with these conclusions is that they are based on a small number of polls, and there are no real outcomes to compare them to,” says Miller.

“Most importantly, there are often lots of other things going on at the same time as casualties that might also reduce support for a war.”

To get a better sense of public backing for battles, Miller asked people if they would support a war with casualties ranging from five to 500 and with the prospects of success ranging from not very high to high.

He surveyed 900 people randomly divided into six groups who were asked about a hypothetical mission to restore order in an unnamed Pacific nation close to Australia.

Miller found that public what mattered most were the chances of a mission’s success.

With high casualties but with the Chief of the Defence Forces confident of success, 39 per cent of respondents said they would support the war. This increased by seven to 46 per cent support with low casualties.

When the Chief of the Defence Forces was not confident of success, 30 per cent of people supported a war with high casualties. Once again, this increased by seven per cent, to 37, with low casualties.

“As can be seen from these results, at each level, the effect of the prospects for success is stronger than the effect of casualties,” says Miller.

“By contrast, if the CDF is ‘very confident of success’, the difference in the probability of an individual supporting the mission between the highest and the lowest level of casualties is only seven per cent. This is the same when casualties are high.”

It would seem then, that the cost in blood and treasure (Iraq cost Australia $2.5 billion, Afghanistan $9.3 billion) is something the public may be willing to pay – if the fight is worthwhile and leads to the right outcome.

“I challenge the conventional wisdom that Australians are reflexively ‘casualty phobic’,” says Miller.

“Instead Australians, like Americans, are more willing to take casualties than previously thought, provided they believe the mission is worthwhile and likely to succeed. In fact, Australians actually appear somewhat less sensitive to casualties than Americans.

“So Australians are casualty sensitive, but not casualty phobic.”

Miller is quick to point out that people were generally not willing to support military operations overseas whether they incurred casualties or not.

“The Australian public isn’t super warlike, they’re just not as scared of casualties as they have been portrayed to be,” he says.

“These survey results don’t mean that policymakers should sacrifice soldiers’ lives as though they were of no account.

“Rather, there needs to be a clear national interest case for the conflict and a clear plan to win. It’s not just a matter of spin – that is, persuading the public that these two conditions hold when they actually don’t.”

So while the Australian public might not support boots on the ground in Iraq again, on the off chance they are there, they may be willing to wear the cost if they think the cause is worth it.

An earlier version of this piece was published on the Australian National University’s College of Asia and the Pacific website: http://asiapacific.anu.edu.au/

James Giggacher is Editor of the blog on Southeast Asian politics and society, New Mandala.