The causes of the famine in the Thar Desert region of Pakistan, and what that country’s policymakers can do about it.

Terrorism and extremism are substantial problems for Pakistan, but there’s another significant problem facing the country – poverty – and it’s a problem that is causing famine, death and hunger in the Thar Desert region.

The situation in the Thar Desert is grave. Several hundred people have already died this year as a result of famine and a report from United Nations International Children’s Emergency Fund (UNICEF) estimates that about three million people are at risk of starvation while hundreds of thousands have fled their homes.

The famine is showing no signs of letting up, and the government and its policies are struggling to get on top of what is quickly becoming a humanitarian disaster. With millions of lives at stake, it is important to understand what the problem is and how to fix it.

Economists will tell you there are two main contending theories of the causes of famine. One is the Food Availability Decline (FAD) theory and the other is Amartra Sen’s ‘entitlement approach’. The FAD theory argues that famine occurs if there is a natural disaster that causes crop failure and subsequent food decline. This food decline then causes starvation. However, if there is food decline in a local area, then famine can be stopped through transporting food into the disaster area. So for food decline to be a reason for famine, there needs to be either a widespread food availability decline and/or disruption in the transport mechanism, which prevents food from being transported into the famine hit areas.

However, as there has been no starvation or shortage of food in Pakistan other than in the Thar Desert, the theory of FAD can be ruled out. Moreover, there has not been any disruption to transport infrastructure, so food could easily be moved in to aid the starving people. This evidence shows that lack of availability of food is not the cause of the famine in Thar.

This brings us to our second theory – the entitlement approach. This theory argues that it is not food availability that is the problem, but wealth distribution. According to this theory, starvation happens because people are too poor to buy food.

In the Thar Desert area no rich people have died, but hundreds living at or below the poverty line have lost their lives. This suggests that it is poverty itself that is causing the famine in the Thar Desert. Indeed, the lack of economic growth in the Thar Desert, coupled with rising inflation, has directly affected people’s ability to buy food. A lack of proper health care infrastructure has made the situation worse. 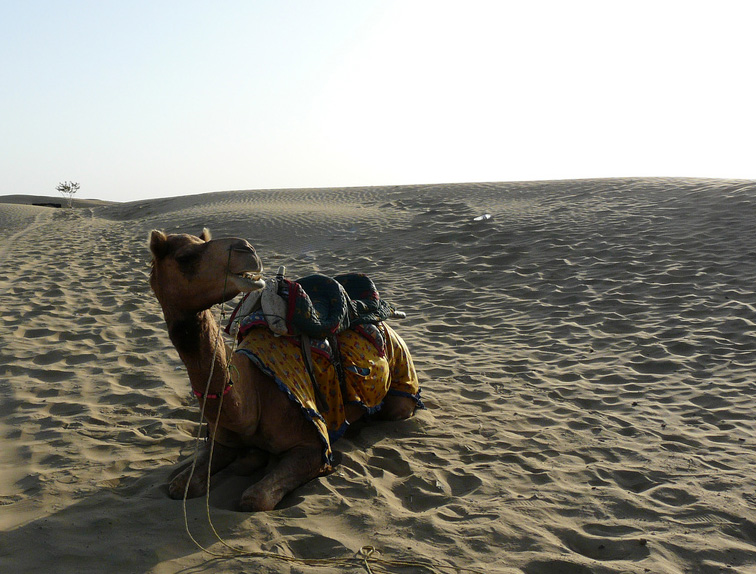 A camel in the Thar Desert in Pakistan. PHOTO: Ashwin Kumar on Flickr.

When famine strikes, some people die from starvation itself, but many more deaths occur from disease. As a person becomes malnourished, their immune system weakens, leaving them more vulnerable to disease. Especially dangerous are diseases such as cholera that cause further malnourishment and dehydration.

The ramifications of a famine can be profound. They include a stark increase in mortality rates, disruption in social life, a decrease in the current and future workforce, and an escalation in poverty rates. In addition, famines can cause permanent health damage to the survivors and a decrease in the cognitive abilities of the malnourished children.

To save lives and prevent future catastrophes, the Pakistani government needs to act quickly and systematically. It could do this through boosting the food intake of the people in the Thar region by providing food supplements and by offering vaccinations to shield the poor from the consequences of immune suppression due to malnourishment. Also important are the provision of clean drinking water in the area to prevent diseases such as cholera and provision of better health infrastructure in the region.

Another important step the government could take is a census of the local population to track the health of these people. This data gathering would be crucial in monitoring the effectiveness of the policies implemented by the government and may provide important feedback for improving future policies. This may also lead to a culture of evidence-based policy-making in Pakistan.

In the medium to long term, more work needs to be done to bring in economic growth and development policies to provide jobs and education to the people in the area, so that they can escape poverty. Additionally, given the recent pattern of monsoons and floods in Sindh, a program of building dams in the area and developing irrigation canals would bring water into the Thar Desert. This will not only provide water for the population and their livestock, but may also open up opportunities for agriculture and employment for the local people.

Every single life is important and the continued increase in casualties from this avoidable famine is tragic. Effective and well thought-out public policy is the key to making sure people in the region have the food, water and healthcare they need to survive.