The risky business of providing medical help in conflict

Crafting and implementing policy that protects health workers is difficult in any circumstances; in situations of conflict it becomes nigh on impossible. Yet the impact of these policies can mean the difference between life and death, not just for the medical staff but also for the communities they serve.

Imagine being seriously injured in an urban conflict and arriving at a well-stocked hospital to find all the surgeons have fled for their lives; or the only doctor in your town is arrested for providing treatment to ‘enemy sympathisers’. This is reality for many people in conflict zones such as Syria and Iraq, where previously stable and modern healthcare systems have been destroyed. It is a major humanitarian problem that needs to be addressed and stopped.

Violence against medical workers is reprehensible for both the immediate consequences and the knock-on effects for thousands of people. The threat of death, injury, kidnapping or arrest of healthcare workers, as well as destruction of medical facilities and transport, disrupts and can obstruct access to healthcare.

In Somalia, for example, where doctors are desperately needed, a suicide bomber killed many newly-qualified doctors at a 2009 university graduation ceremony. When the sole functioning hospital in one region of Sri Lanka came under direct shelling, the entire population was affected. These shocking incidents cannot be tolerated.

The overarching theme is that the role of healthcare workers in providing neutral and impartial assistance must be recognised and given special protection, as dictated by international humanitarian law (IHL), the laws of armed conflict. Under international humanitarian law, it is prohibited to attack, threaten, harass, punish or otherwise interfere with healthcare workers, hospitals and ambulances. Yet these laws are repeatedly violated.

The International Committee of the Red Cross collated data of violent incidents against healthcare personnel and infrastructure from a sample of the countries in which it operates, demonstrating that medical workers in situations of armed conflict constantly suffer from threats and attacks, both targeted and unintended, as they carry out their duties. Two reports from 2011 and 2014 paint a horrifying picture of the extent of violence against the healthcare system in situations where health services are needed most. 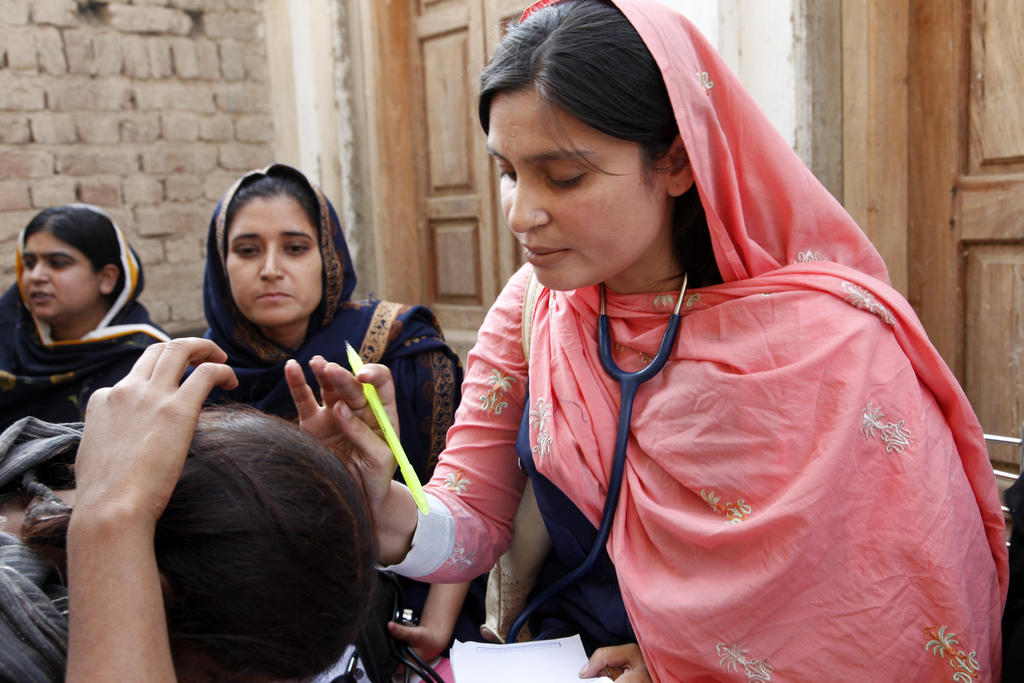 A female doctor with the International Medical Corps examines a woman patient at a mobile health clinic in Pakistan. Photo by DFID: https://www.flickr.com/photos/dfid/5331065350

Respect for healthcare in conflict cannot be guaranteed without adherence to the laws of armed conflict. In addition to adequate training for armed forces, there must be consequences for those who breach the laws, as impunity will weaken the effect of legal protections. A strong legal framework and the willingness to prosecute offenders will guard against this.

Measures to improve the protection of healthcare in conflict are not only applicable to armed forces. Many Australian medical personnel work overseas in situations of armed conflict. Their training prior to deployment needs to include awareness of how healthcare must be delivered, respected, and facilitated.

Although the ramifications for public health may not be as extensive as in wartime, violence against healthcare workers occurs in peacetime too, including in Australia. One of the ways to ensure that healthcare is protected in wartime is to implement, and enforce, policies in peacetime.

The latest Health Care in Danger publication, Domestic normative frameworks for the protection of health care, outlines recommendations for states to ensure that their international obligations are translated into domestic law and regulations with appropriate penalties and awareness.

In Australia, this responsibility lies with both federal and state governments, and action in this regard shapes public policy. For example, Victoria has prioritised the legal protection of healthcare workers by doubling the penalty for assault if committed against health practitioners in their place of work.

It is also important that the public is aware that the protective power of the Red Cross emblem in conflict is diminished when its meaning is blurred by incorrect usage in peacetime.

It is not only the International Committee of the Red Cross and its partners who are concerned about the lack of safety for healthcare workers. And it is not just lawmakers who can play a role in improving the situation. Individuals, civil society organisations, media and medical groups in Australia can influence public policy by raising awareness and advocating for policies that enhance the protection of healthcare domestically and globally. They can join the online community of concern, promote training tools for medical students and practitioners, and support the resolutions and regulations of norm-setting international bodies such as the World Health Organization. They can also increase awareness among media on the importance of perceptions created by reporting on conflicts on acceptance and respect of healthcare workers, and avoiding misuse of the emblem.

Healthcare professionals are our greatest asset in times of need, whether it’s a bike accident or a mortar that has caused the injury. We need to respect them and ensure they are safe from violence so that they can continue to save lives.

Natalya Wells is Policy & Political Affairs Officer at the Canberra-based International Committee of the Red Cross Mission in Australia.