The price of protection

Social protection programs may be well-intentioned, but they come with a raft of unintended consequences for policymakers

Social Protection Programs can capture imaginations when it comes to reducing poverty and hardship, through initiatives such as labour market interventions, social insurance and social assistance. But as well-intentioned as these may be, there are unintended consequences for informal safety nets, for retention of skilled workers, and for fiscal sustainability that prompt the warning, buyer beware.

There is growing interest in expanded social protection programs (SPPs), even amongst the poorest countries. Some of this reflects improved access to financial services, and the expansion of mobile telephony which has allowed cash transfers to be made to people with little connection to the formal economy.

Now there is an opportunity to embed expanded social protection goals into international agreements, especially as proposals are considered for new international development goals and targets post-2015.

Yet despite this confluence of factors, there are grounds for caution, and policymakers should not rush into expanding SPPs. I discuss these reasons for caution in a new Asia & the Pacific Policy Studies paper, which also highlights key questions where the available evidence is either missing, or not general enough to support uncritical enthusiasm for larger social protection programs.

An economic motivation for SPPs is that they may promote people out of poverty. This idea assumes that ‘poverty traps’ – where current poverty begets future poverty – are pervasive. Yet a recent World Bank study found that evidence in favour of poverty traps is surprisingly weak. Whether available production technology or borrowing constraints cause people to be stuck in a low‑level equilibrium is unclear, despite the ubiquity of the poverty trap model in textbooks.

It may take much more than just a short, sharp burst of expanded social protection transfers to boost people permanently out of poverty. If SPPs become a permanent feature of the economy, their fiscal sustainability has to be examined.

The International Labour Organization estimates (see .pdf page 57) a complete social protection package in low- and middle-income countries would cost between 4-11 per cent of GDP per annum. It is unlikely such a large share of output can be directed to transfers without harming growth, especially if implicit or explicit taxes to fund the transfers distort work choices. 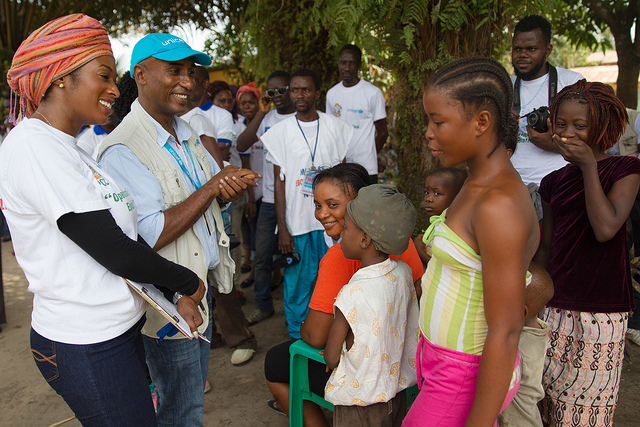 The fiscal sustainability of SSPs is also threatened by growing global competition for skilled workers. Expanded social protection is likely to be funded from the top of the income distribution, which is an increasingly mobile part of the tax base.  Relying on the top follows from the impossibility of a cash transfer system simultaneously meeting three reasonable objectives: acceptable living standards for people who rely solely on the cash transfer; not harming work incentives so that people who receive cash transfers are not trapped; and targeting only needy people rather than the middle class.

To illustrate this trilemma, take Papua New Guinea (PNG) as an example of who pays hypothetical transfers – designed so that no-one was below the poverty line (as per the first condition above).

If public transfers abate at a rate of just 33 toea to the kina (or cents to the dollar, in Australian terms) as market incomes rise (an effective marginal tax rate of 33 per cent, which may satisfy the second condition of not harming work incentives), it requires taxing 12 per cent of the population – those living above three-times the poverty line – to fund transfers for the other 88 per cent (which probably violates the third condition).

The richest 12 per cent of the population in PNG already pay over 43 per cent of the income tax and it is unclear how much more could be squeezed from them before they consider leaving for countries with lower marginal tax rates.

The problem of an increasingly mobile tax base in countries with limited experience dealing with skilled emigration is just one of many challenges facing proponents of expanded social protection programs. There are five types of unintended consequences: perverse responses of targeted groups; distorted employment choice between informal and formal sectors; damage done to non-recipient households due to general equilibrium effects; damage done to informal social safety nets; and mis-targeting  due to behavioral responses.

Given the risk posed by these, and the lack of credible micro-level evidence on many of the types of adjustments and substitutions that underlie these responses, prudent policymakers should proceed with caution when facing demands for expanded social protection.

This article is based on the author’s paper in Asia & the Pacific Policy Studies: Expanded social protection may do more harm than good: a pessimistic review.

John Gibson is Professor in the Department of Economics, University of Waikato.