How migrant smugglers are exploiting the international protection system.

‘Ghost ships’ and the on-water abandonment of the hundreds of migrants they carry is an ominous sign for policymakers.

Migrant smuggling may once have been the bastion of small-scale operators seeking to move people across borders illegally. The emergence of ghost ships carrying hundreds of migrants in the Mediterranean Sea shows how times have changed. They are a warning sign that smugglers may be in the ascendancy and that the international protection system risks being undermined.

This new tactic by migrant smugglers is potentially very lucrative for them. It is reported that the organisers of the Ezadeen merchant ship rescued in Italian waters in January earned around USD 3 million, with each of the 350 migrants on board paying up to USD 8,000. Only two days earlier a larger ghost ship carrying around 800 migrants was saved in the Mediterranean Sea from what could have been a massive maritime disaster.

The on-water abandonment by smugglers is a new development in large-scale maritime smuggling operations. Where previously small vessels were used to transport migrants from North Africa, Turkey, Syria and elsewhere, larger cargo vessels were used more frequently during 2014.

Using cargo ships for migrant smuggling is anything but small-scale. It’s not able to be done hastily. It’s not ad hoc. It would take considerable time as well as planning, organisational and delivery capability, and many people would be involved directly and indirectly. While it is difficult to judge whether the use of ghost ships will become more common, they signal greater sophistication and some ominous signs for policymakers, migrants and others. 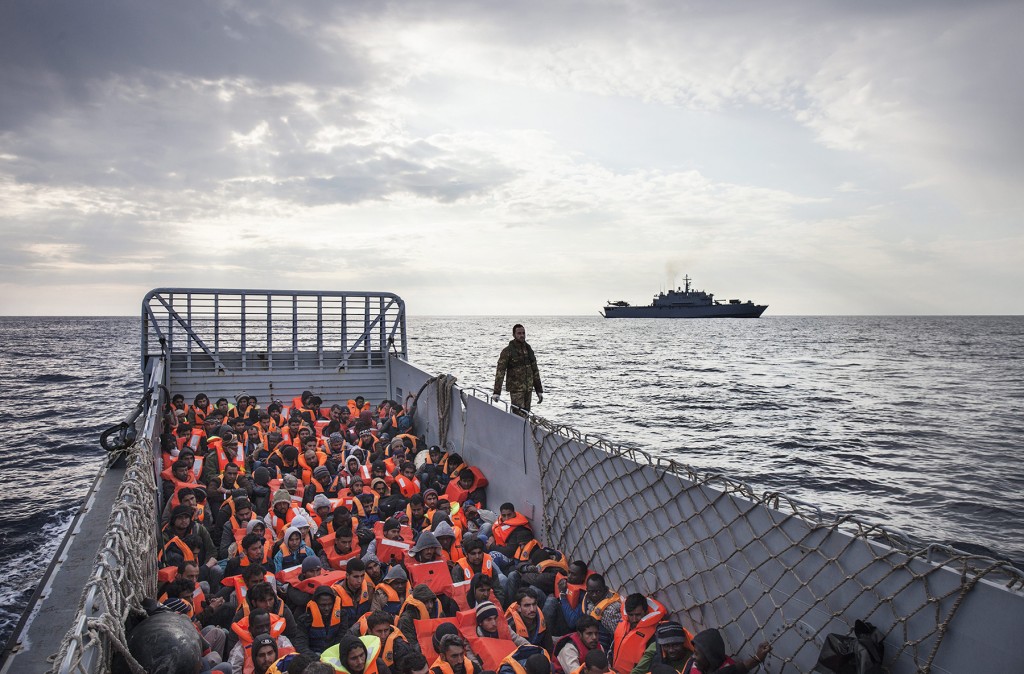 What it shows us is that firstly, operational feasibility is increasing. There are fewer constraints on smugglers as telecommunications improve, international monetary flows enable pooling of resources, the number of migrants able to afford smuggling increases and there are officials who seem willing to collaborate. In a recent research project on the assisted voluntary return of migrants, we found that every single one of the 273 migrants interviewed in the 15 countries had paid smugglers. Migrant smuggling has become the norm.

Secondly, demand is high. The increase in displacement is an important factor but migrants’ search for a better life fuelled by limited opportunity at home is also driving demand. At the end of June 2014, the total number of refugees was the highest for almost 20 years at 13 million. The migrants on the Ezadeen were almost all Syrian.

The result is that the international refugee protection system no longer provides protection for a sizeable proportion of those in need; nor is it able to adequately protect states’ rights to manage migration and their borders with requisite integrity. Instead, it has become about who can pay, and one of its greatest beneficiaries has become the migrant smuggling industry. Some analysts estimate that smugglers extracted USD 1 billion from migrants along the Mediterranean Sea route during 2014.

Migrant smuggling and its intersection with the international protection system poses many policy challenges for governments. How can migrants’ rights be maintained, irregular movements of asylum seekers be managed effectively, and smuggling operations be stemmed? How can refugees be better assisted in their home countries? Are there better ways to provide information to asylum seekers about the reality of being smuggled?

In our view, a range of responses is required. Firstly, we need to further develop a strong evidence base so we can understand the various actors, their roles, their connections, their operating strategies, their successes and their failures. This is worthy of ongoing investment, particularly given the dynamic nature of migration flows as well as the fluidity of asylum and refugee policy and practice. Research on smuggling has illuminated aspects, however, its exploitation of the protection system needs to be further explored.

Secondly, we need to be honest and clear about some of the weaknesses of the international protection system while acknowledging its substantial strengths. The Refugee Convention is extensively ratified and its core principles widely supported. UNHCR’s frontline operations provide critical support and stability in often highly unstable environments. There remain, however, glaring weaknesses. The inability to return failed asylum seekers is a fundamental issue but so is the absence of a practical response to secondary movements, adequate support for refugee host countries, the lack of accountability of states that cause displacement in the first place, and the failure of existing durable solutions.

Finally, we need to look beyond the media headlines and think in iterative and strategic terms. Understanding and appreciating the increasing inter-connectedness of not just countries and regions but people smugglers and potential migrants underpins sustainable responses.

Policies that are able to account for migration patterns and monetary flows, geography, migrants’ rights, motivations and decision-making, as well as bilateral and regional sensitivities have a much greater chance of developing into long-term solutions. The current policy and operational framework in Australia has been successful at halting maritime migrant smuggling, but at a cost.

Creating a safer and more certain future based on evidence, a critical and honest appraisal of the current international protection system and greater recognition of our inter-connected prosperity is a pressing global priority.

The views expressed in this article are those of the authors and do not necessarily reflect those of their employers.

Dr Khalid Koser is Executive Director of the Global Community Engagement and Resilience Fund (GCERF) and Non-Resident Fellow at the Lowy Institute.