Bangalore is one of the fastest growing cities in India, but its growth is marred by social inequalities.

As the fifth largest metropolitan city of India, Bangalore has its own story of growth. Popular for its pleasant climate and numerous gardens and lakes, it is known today as India’s Silicon Valley for its vibrant IT sector which co-exists with other small and medium industries. This photo essay attempts to visually represent the manifestations of development in urban life in and around Bangalore. The city is connected to neighbouring regions through industrial corridors and national highways. Within Bangalore, urban life is heterogeneous; residents include high-income gated communities on one end of the spectrum and resource-constrained slum dwellers at the other end.

This photo essay captures urbanity in two clusters in Bangalore. First, along the National Highway 7, towards south Bangalore, there are two small townships, Electronic City and Bommasandra Industrial Town, representing contrasting modes of urbanisation and governance. Second, residential layouts along Bannerghatta Road are dotted with high-rises and shopping centres that stand out in sharp contrast with a slum situated nearby. We also find that rejuvenation of common property resources such as Madivala lake has changed its access and use, raising questions around who can lay claim to public commons and their ecosystem services.

This first set of photos is a commentary on how urbanisation creates conditions that exclude some sections of the population while privileging others. Using photographs from a scoping field visit within the city of Bangalore in South India, we first contrast two settlements in southern Bangalore – one a highly planned electronic hub with modern amenities and system of independent governance, and the second a peri-urban landscape across the electronic hub that continues to negotiate its rural identity in a fast urbanising context. 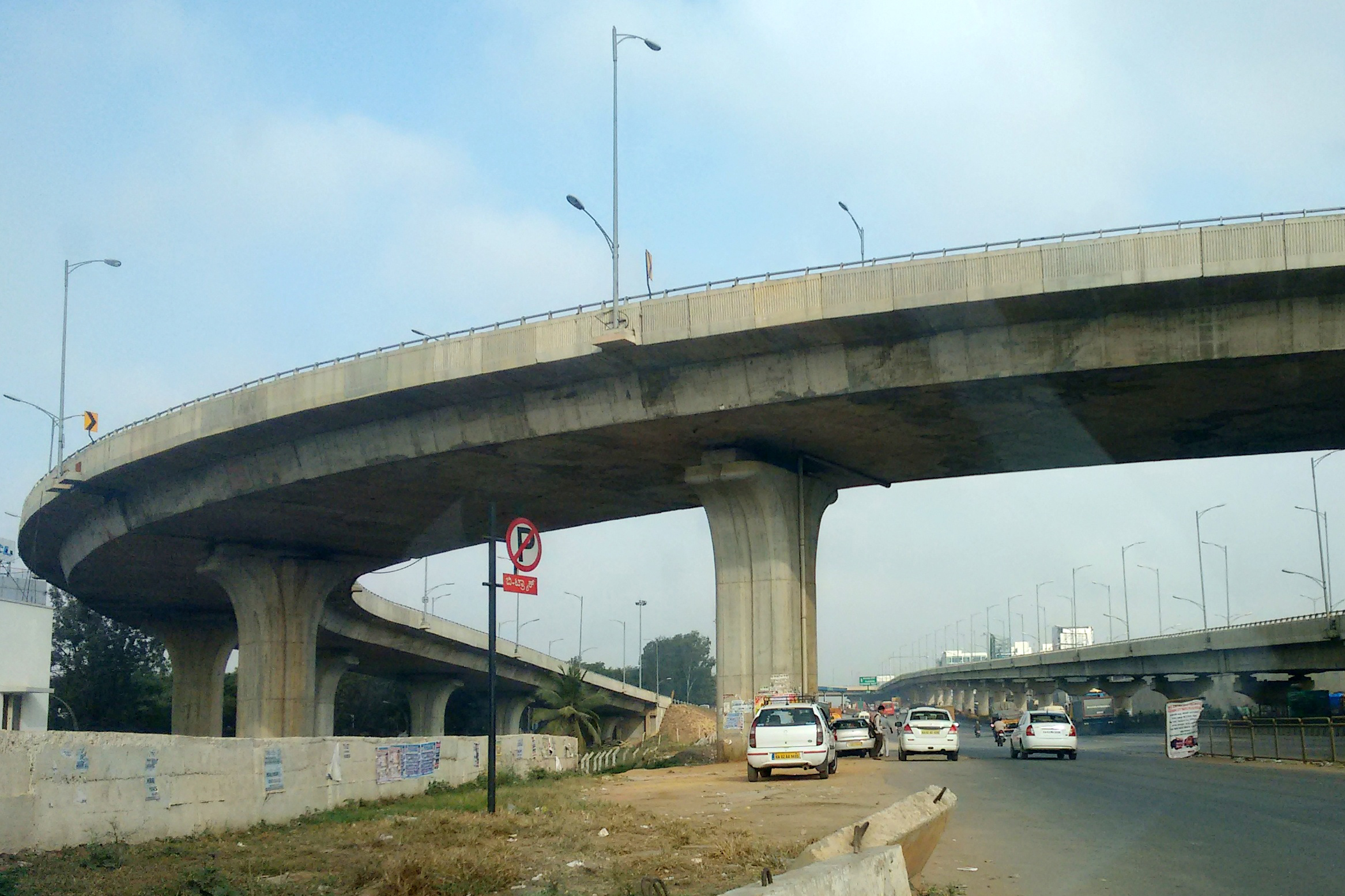 Bangalore Elevated Toll-way is an elevated expressway connecting Bangalore city to Electronic City, a self-governed, industrial and technological hub located to the south of Bangalore. 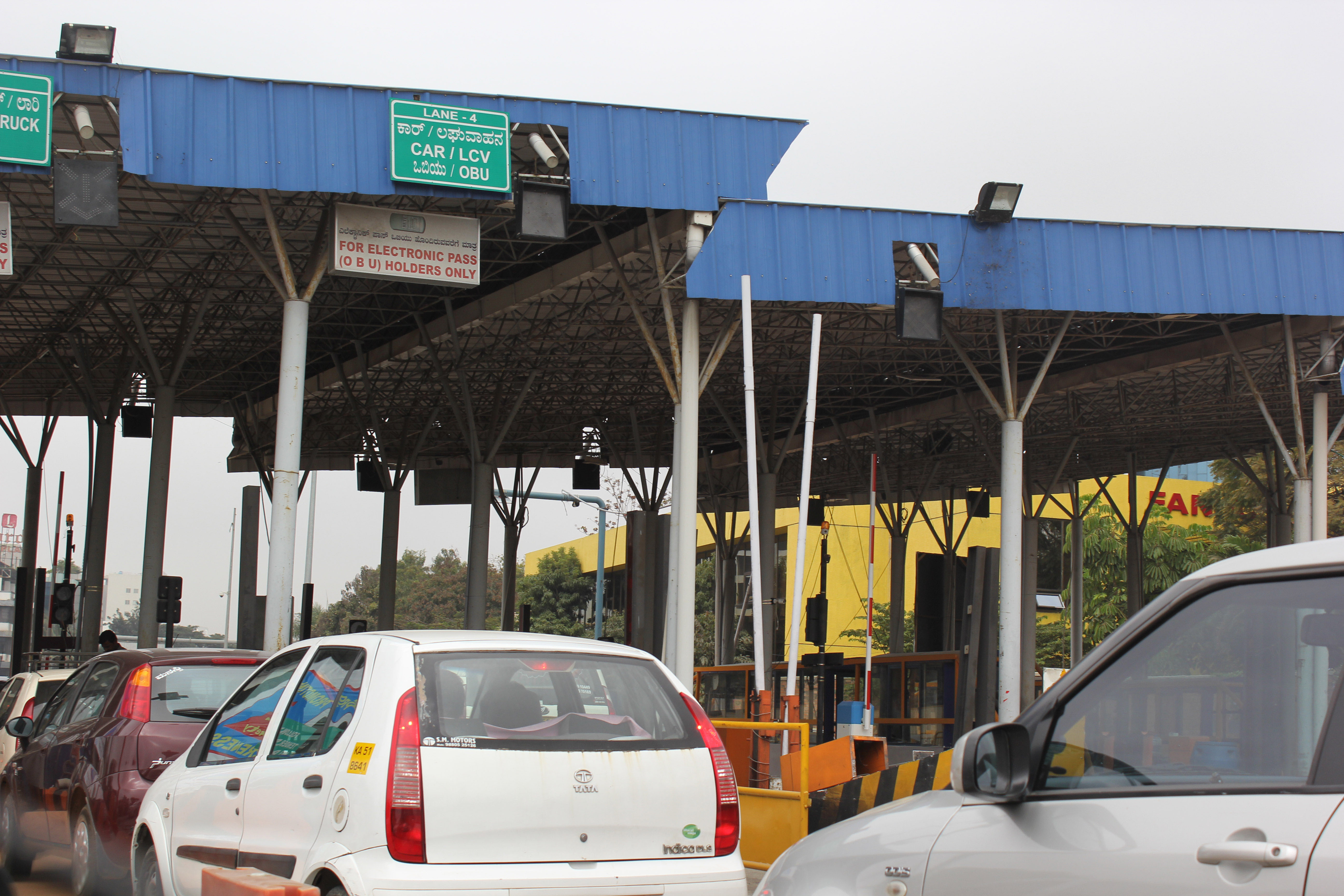 To enter Electronic City one has to pay a toll at the toll-gate. The City is dominated by leading global and Indian IT companies, some industrial firms, and few residential areas. 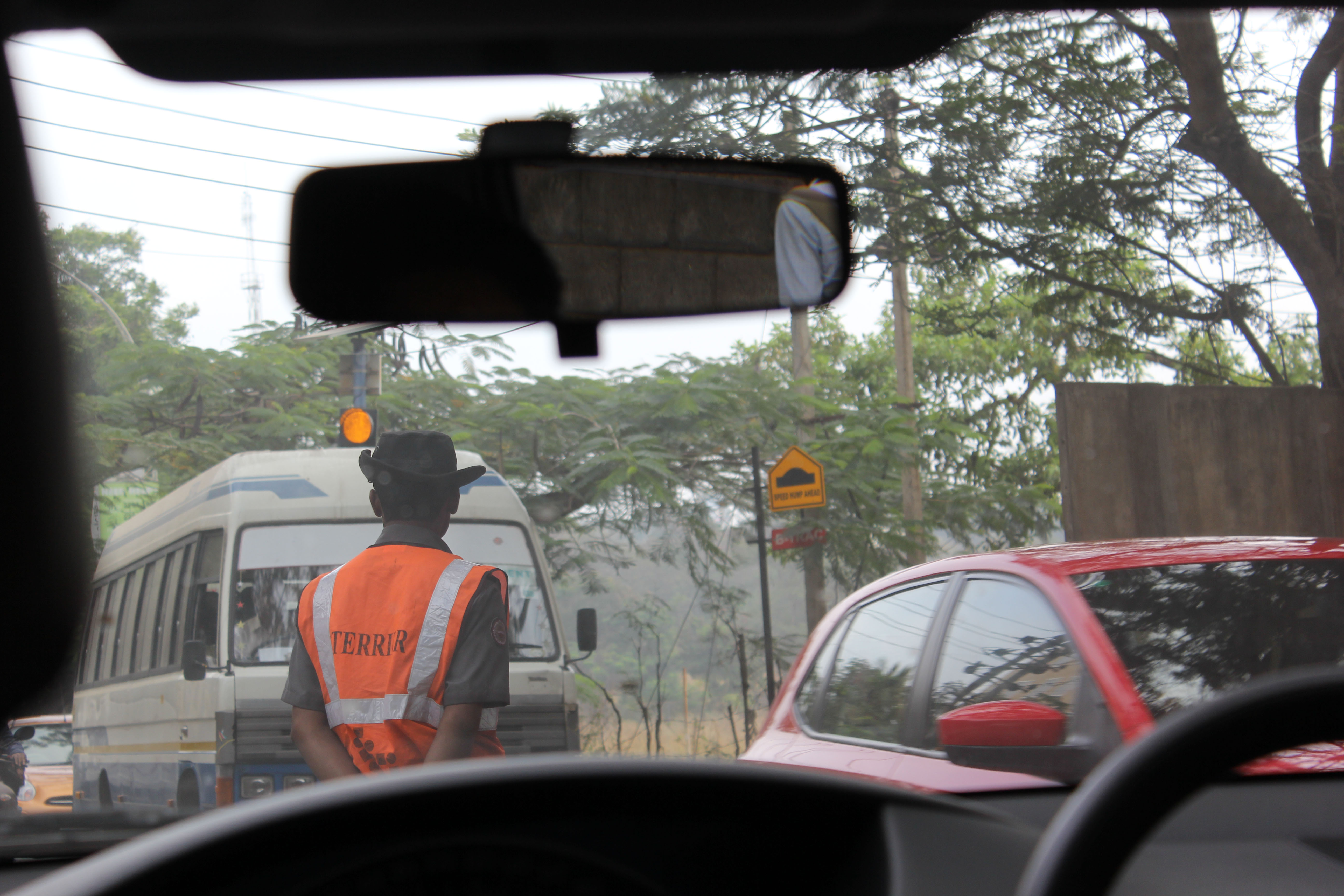 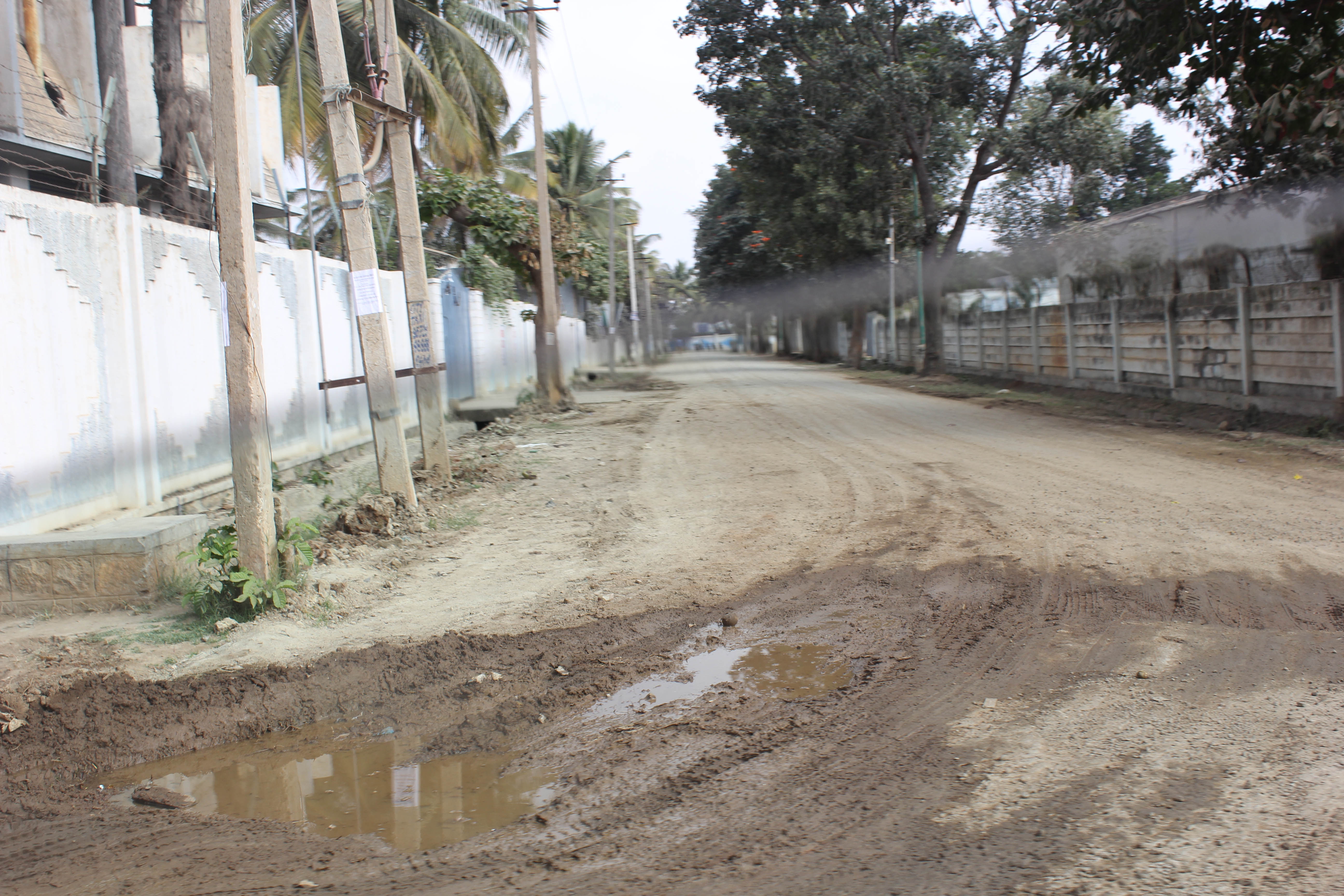 Opposite to Electronic City is Bommasandra Industrial Area, which sprawls over both sides of the National Highway 7 (NH-7). Part of the industrial area merges with the Bommasandra village and has poorly developed infrastructure which is in sharp contrast to Electronic City’s. Here roads are unpaved, garbage litters the main roads, street lights are broken, and open drains and manholes are a hazard. 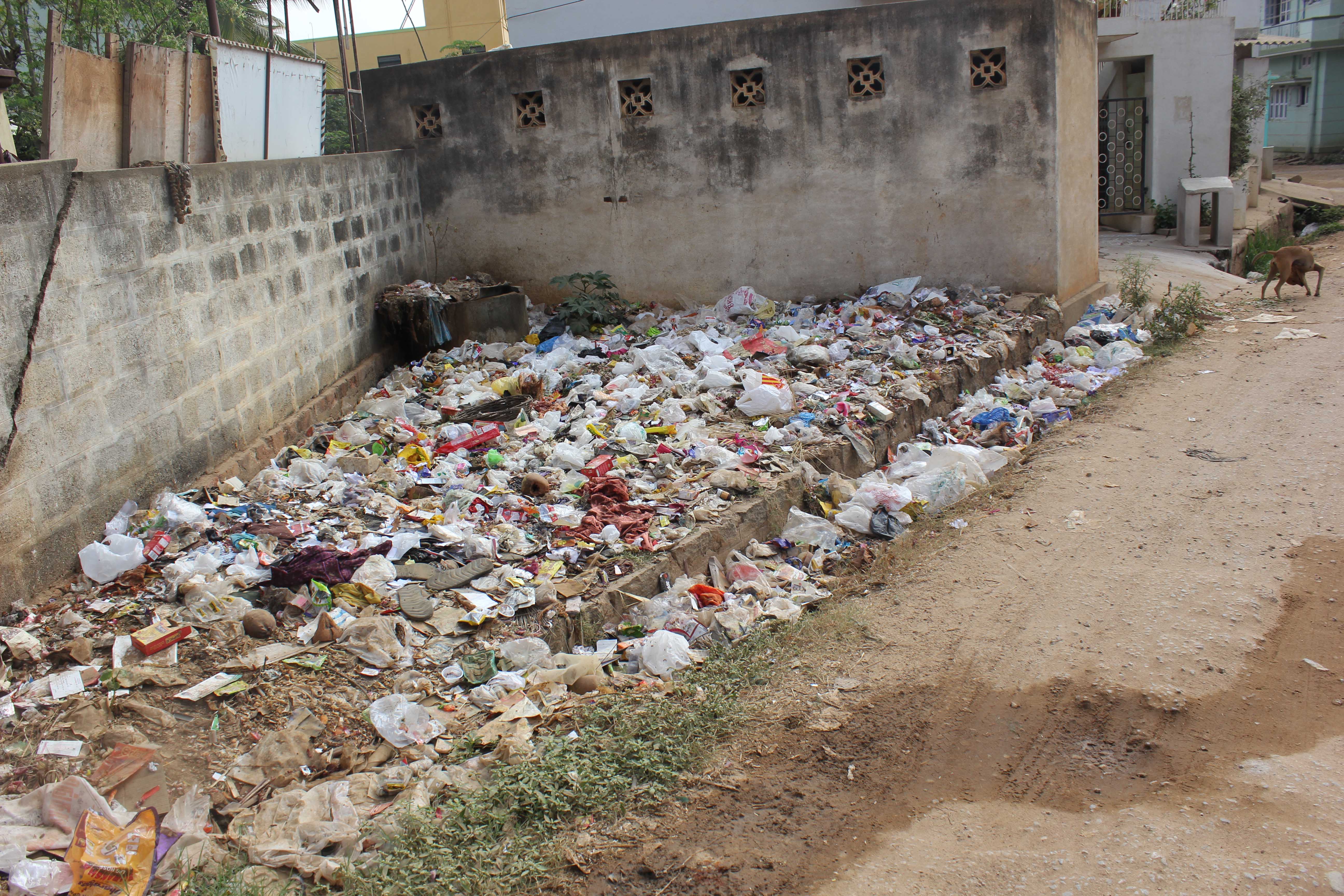 Problems like the lack of solid waste management and unpaved roads are common in Bommasandra village. 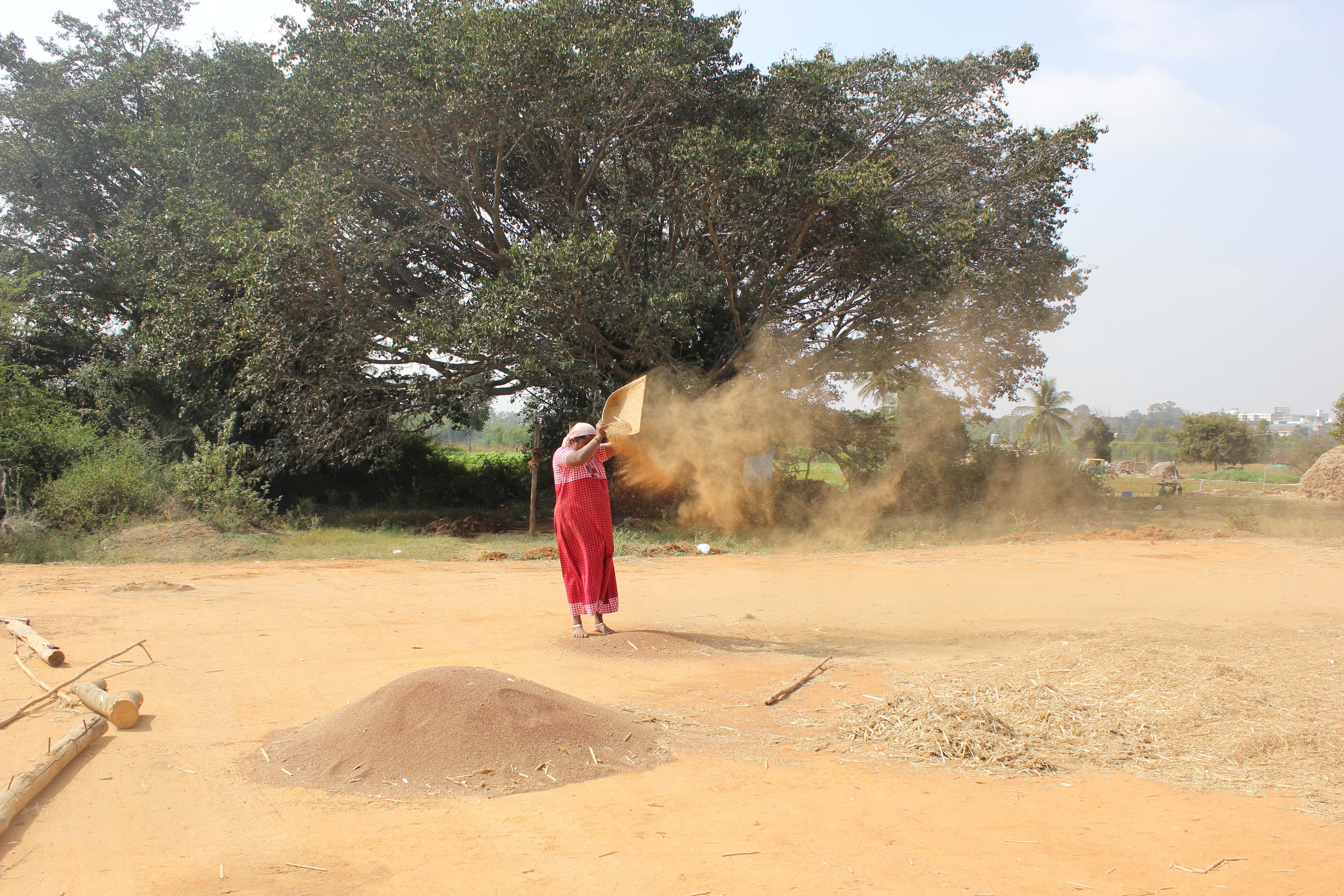 Negotiating its rural-urban identity, Bommasandra village displays a mix of livelihoods from agriculture and poultry keeping, to engagement in informal sectors such as driving auto rickshaws and recycling waste. 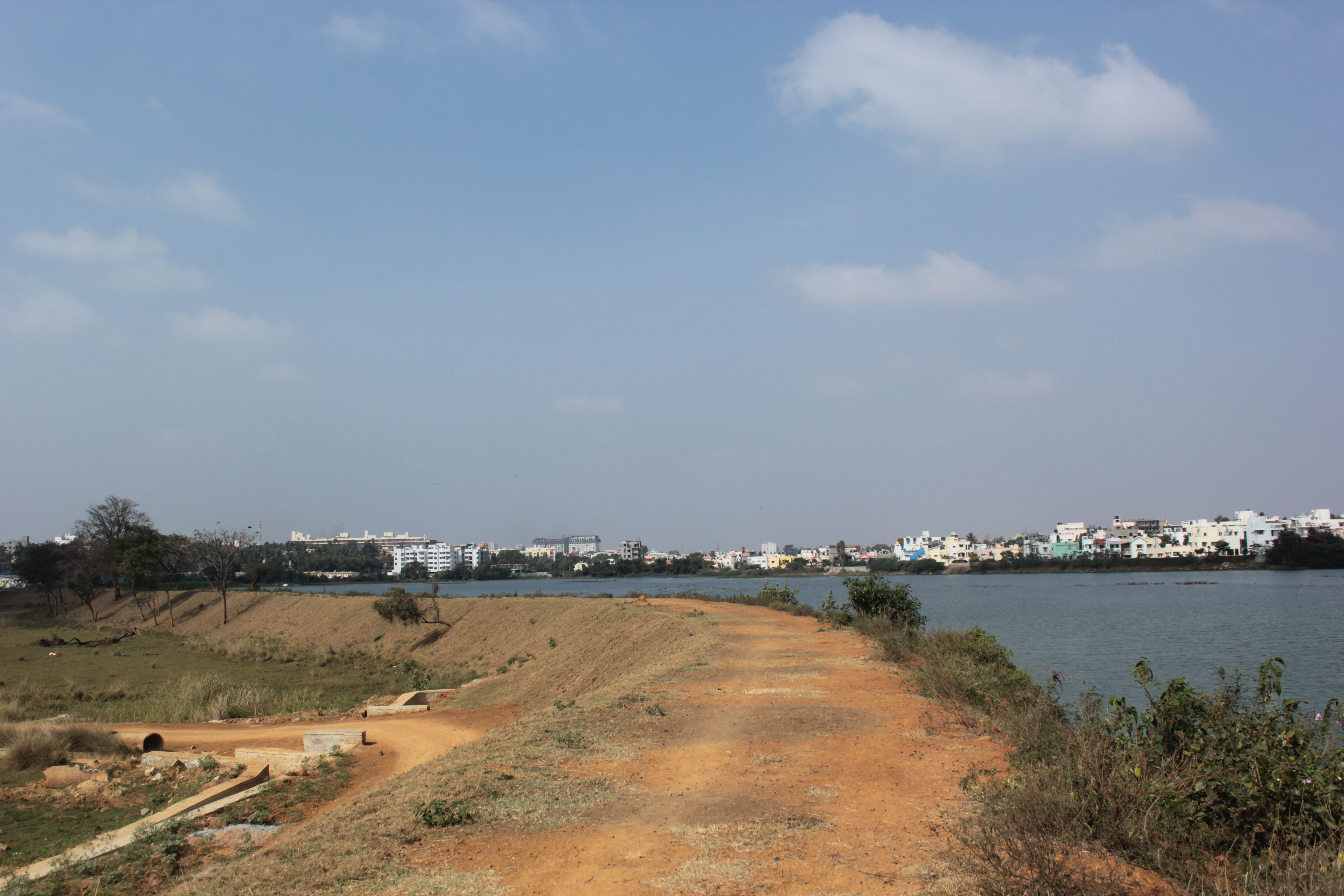 Nearby, the Bommasandra Lake provides water for agricultural purposes. On its periphery, construction of high rise buildings and slum settlements are common. Thus, both through its social systems (personal identify, livelihoods) as well ecological systems (lakes, trees) Bommasandra village is transitioning from the rural to urban.

In the second set of photographs, we juxtapose slum dwellings and high rise buildings to display inequities in urban living. We also use the example of lake restoration within the city to show how some forms of development may exclude citizens from certain services. 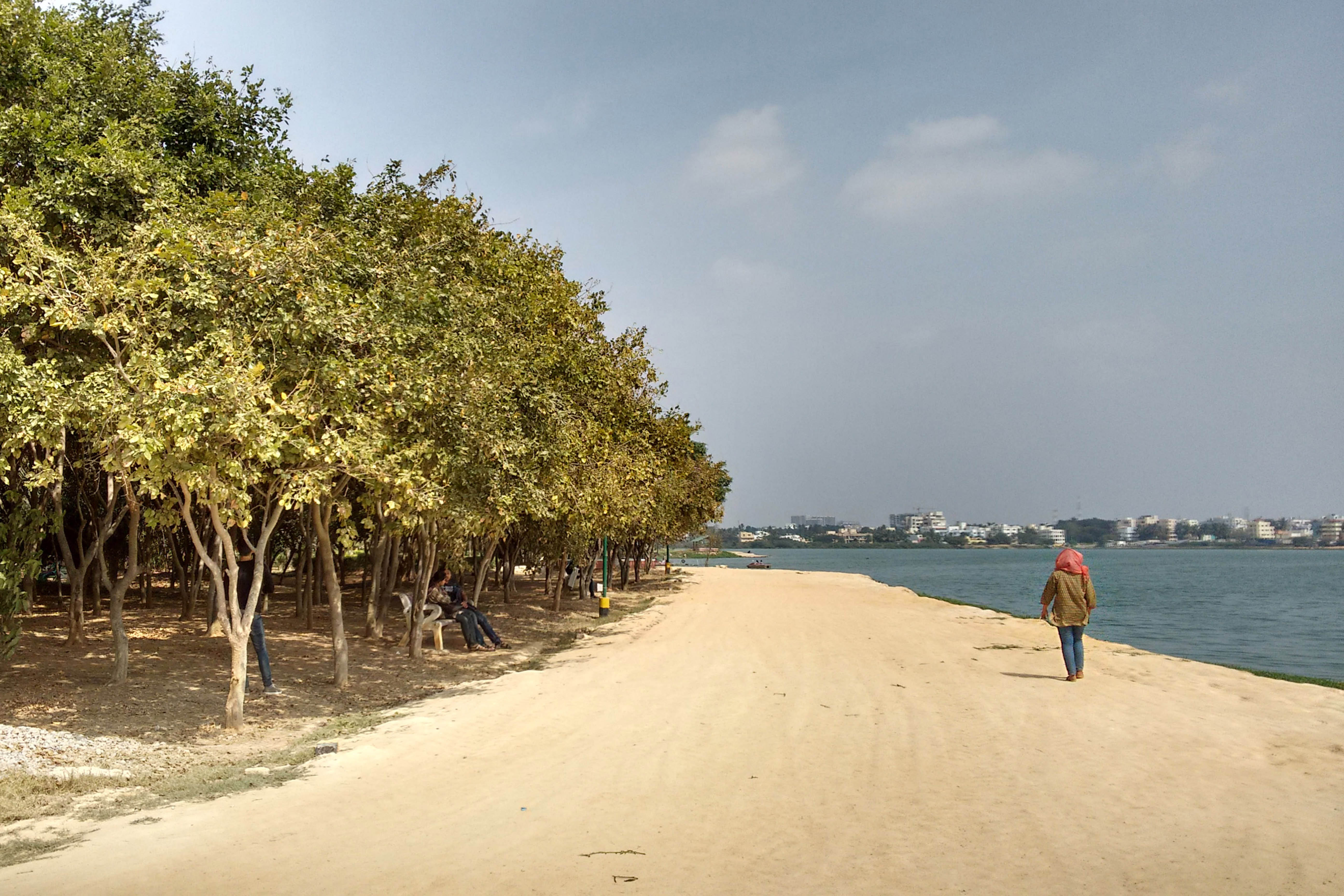 The Madiwala Lake, which was rejuvenated a few years ago, has been developed for recreational purposes like boating and pisciculture. One of the bigger lakes in the city, it is a common recreational space and attracts several migratory birds. However, after the lake was restored, entry is not free, raising the issue of what is accessible to public and to what extent. 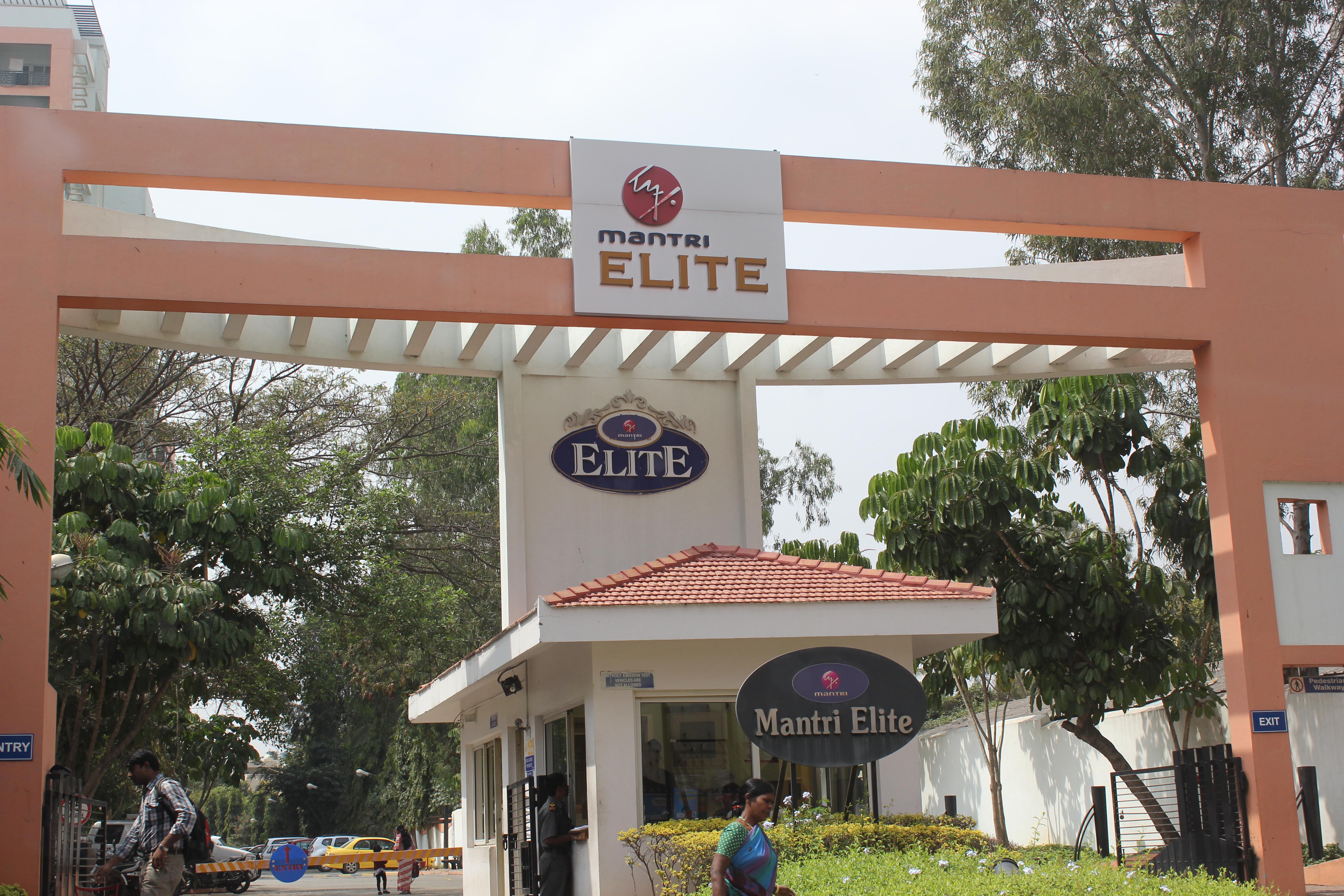 Bangalore’s population has grown from 3.2 million in 1992 to 8.4 million in 2009. This has necessitated the rise of a robust real-estate sector in the city. However, outcomes of this increased housing are not equally accessible to all people in the city. While several large-scale high-end gated housing schemes are under development, housing for the city’s poorer migrants remains a challenge. 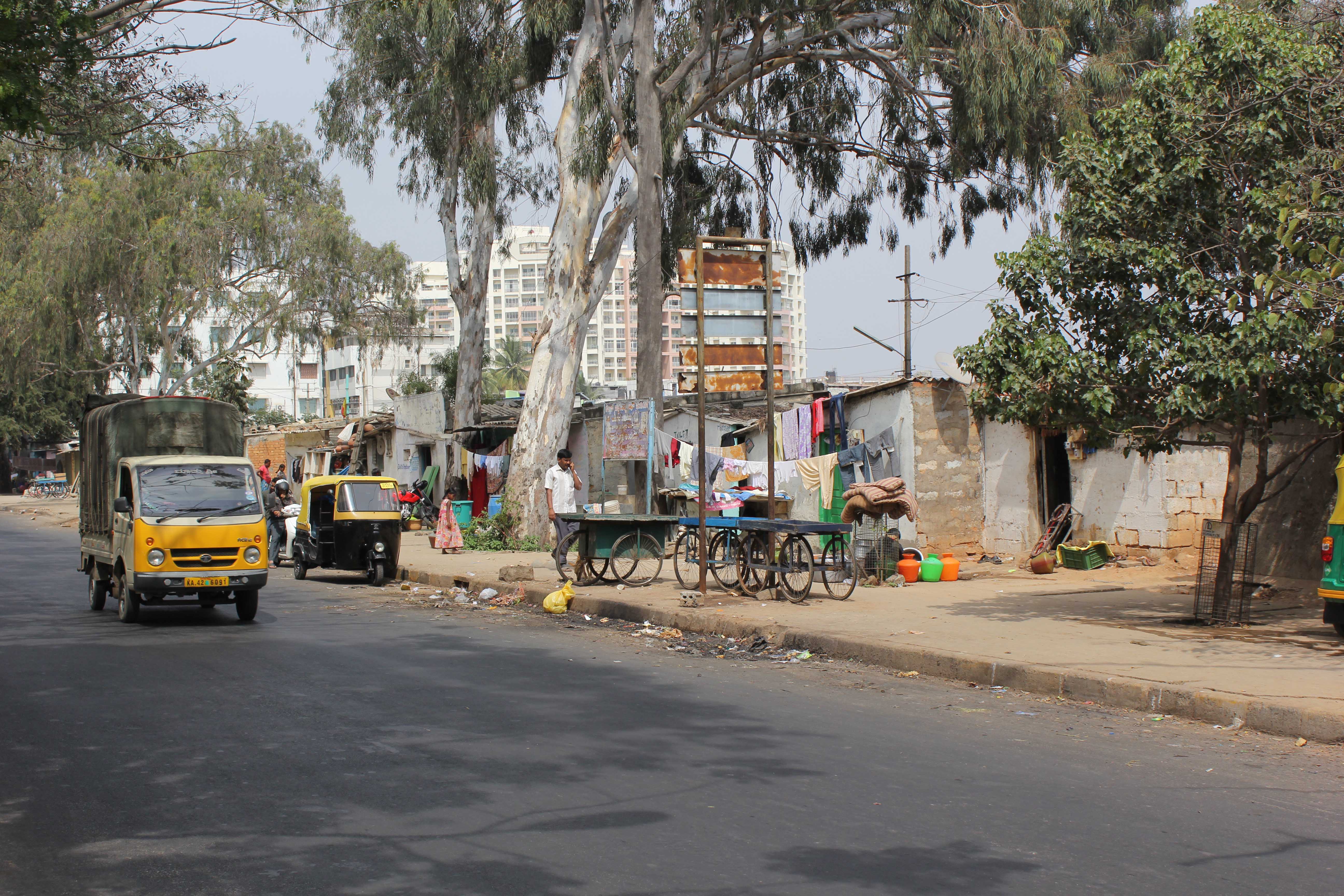 The growth of Bangalore has resulted in a real-estate boom in the city and its suburbs. But this growth is not inclusive and has deepened existing inequities. It is common to see gated communities with exclusive water and power supply (the high-rise in the background), overlooking slums, which lack basic amenities. As in other burgeoning cities, Bangalore’s growth is excluding a swathe of its population. 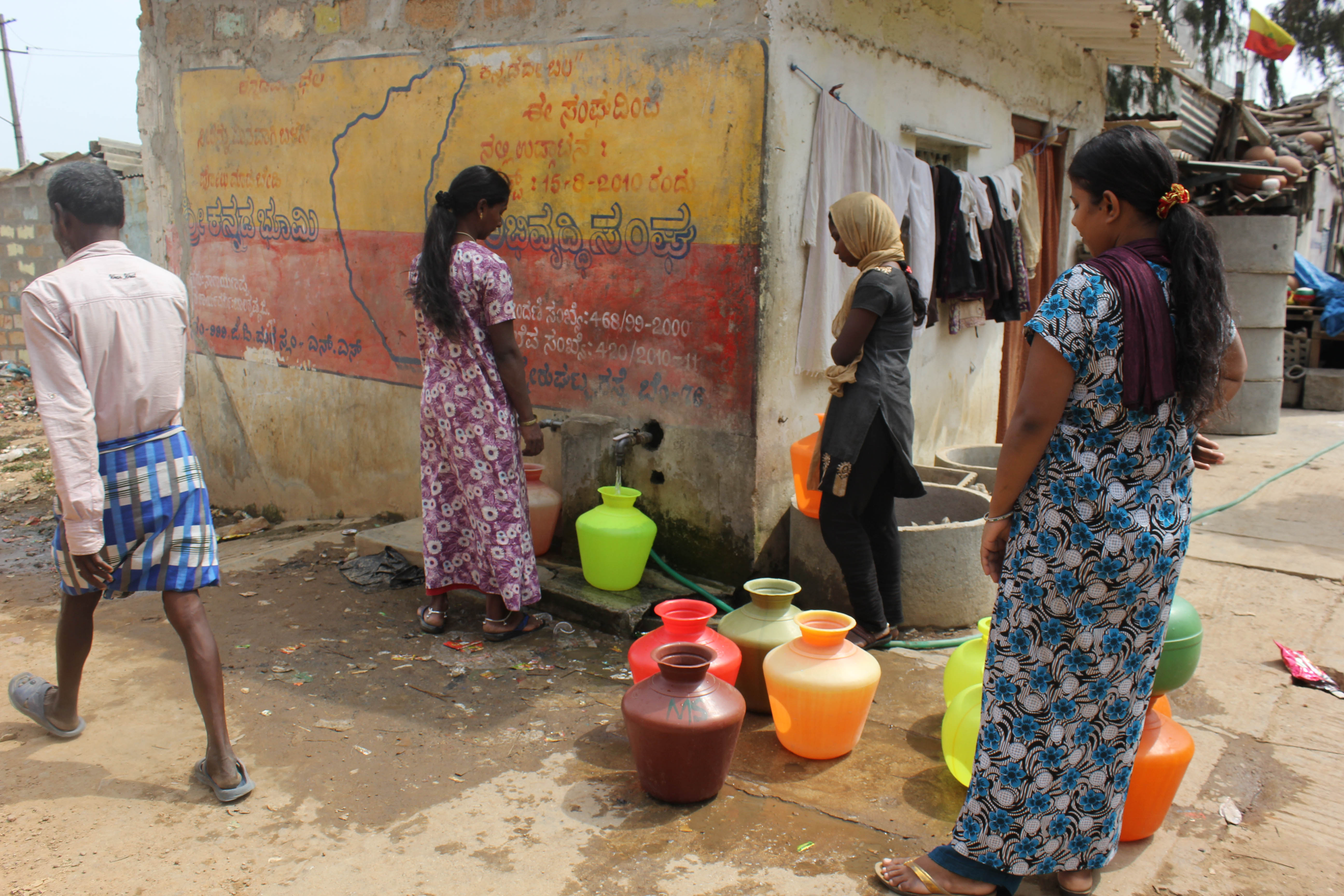 In notified slums, the situation is relatively better. Situated on Bannerghatta Road, the slum above had amenities such as a common water filling area and electricity connections in each house. This is in sharp contrast to slums that are not notified and face acute difficulties in accessing basic resources like water and electricity. 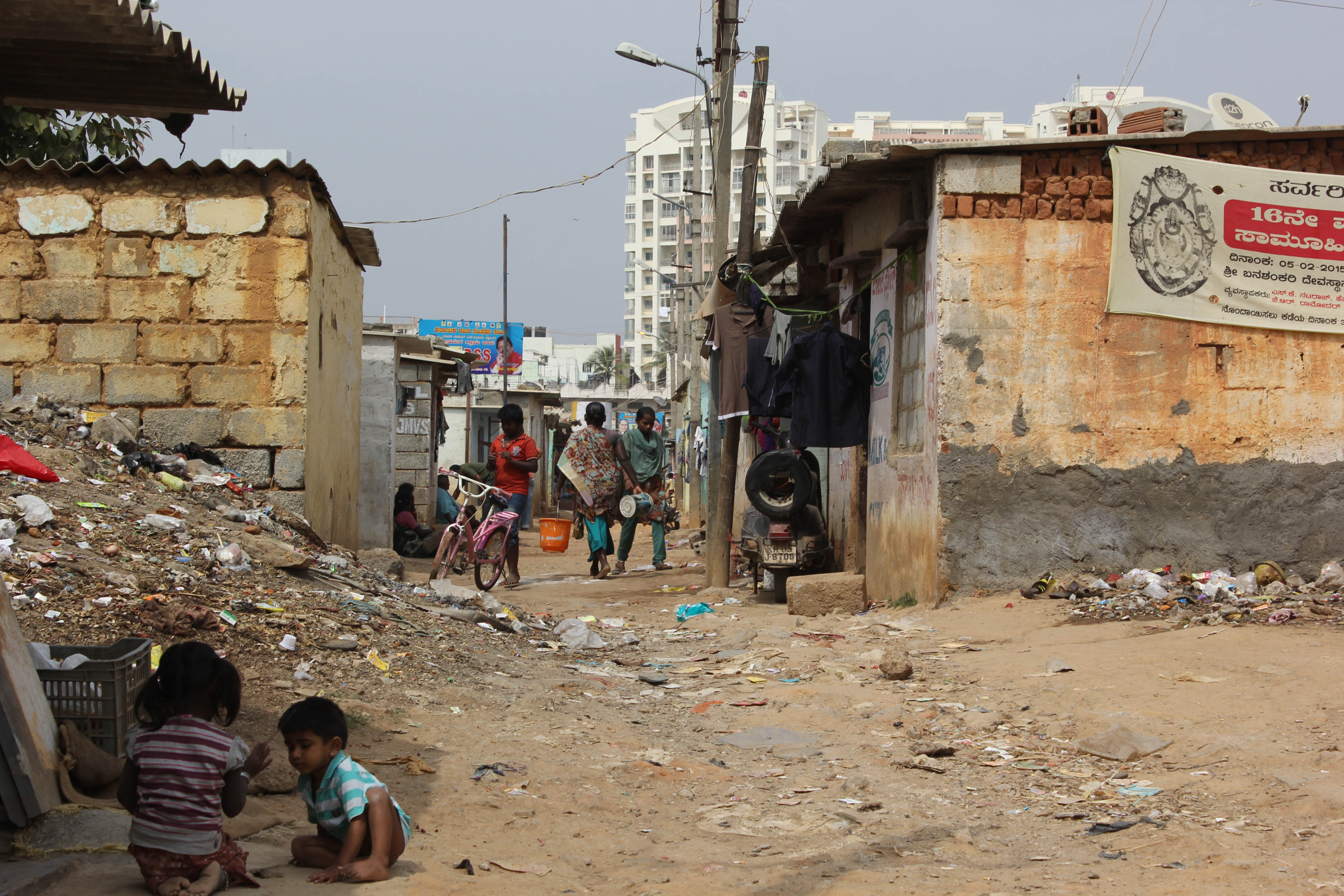 Not only do conditions in slums differ vastly from those in high-rise buildings but even the daily act of living manifests itself differently in the two locations. During our visit at midday on a working day, children played on the streets, with bits and baubles taken from the garbage strewn around them. Nearby, dogs and stray cattle fed on refuse. This sharply contrasts with manicured lawns and uniformed guards around gated communities. 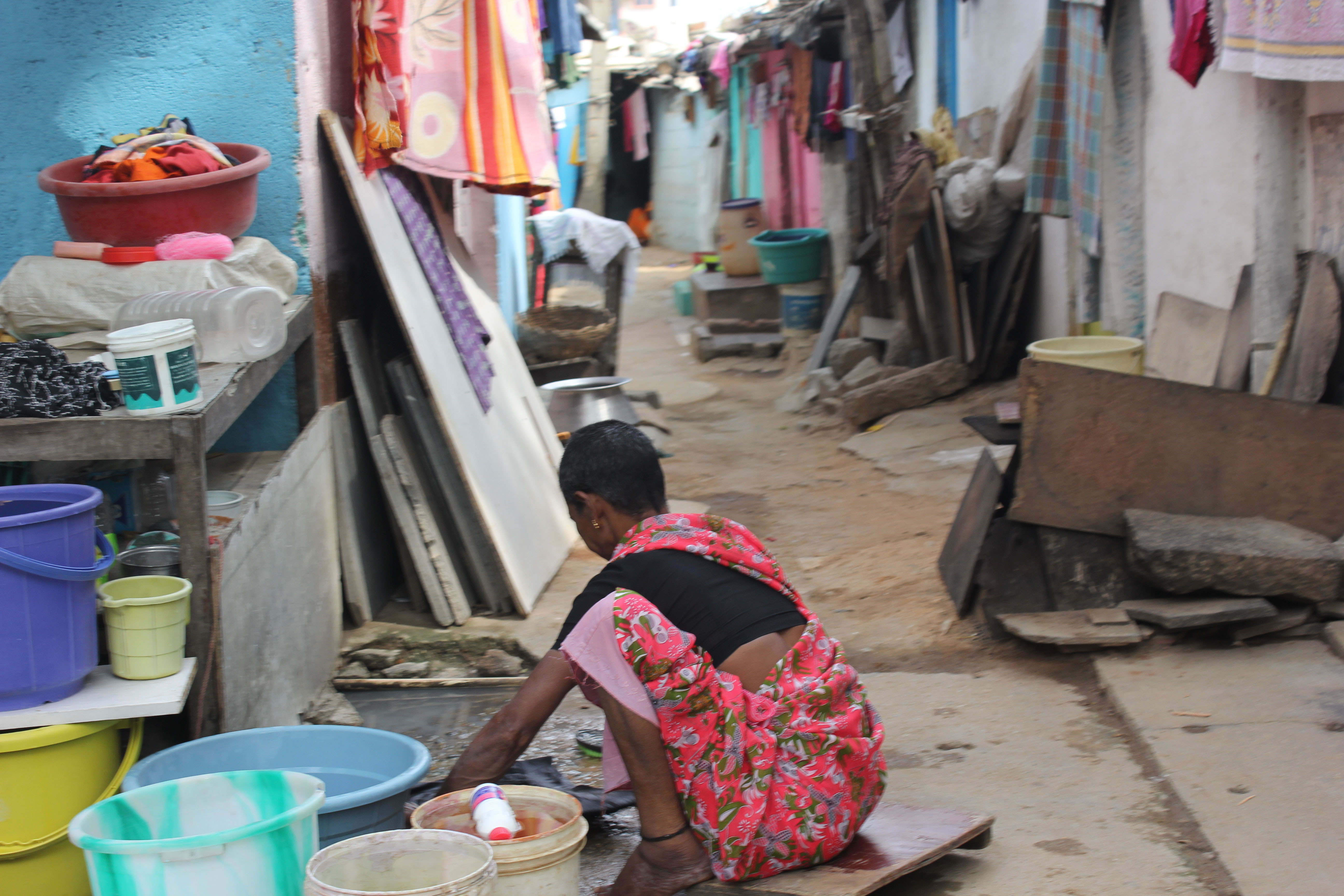 A typical notified slum has narrow streets and one-room houses in haphazard rows. Cramped and small, these quarters are kitchen, bedroom, storage space all rolled into one. Women washed clothes and utensils in poorly drained streets. Though every city has its inequities, in India, while the rich and poor try to live separated, they continue to live side by side. 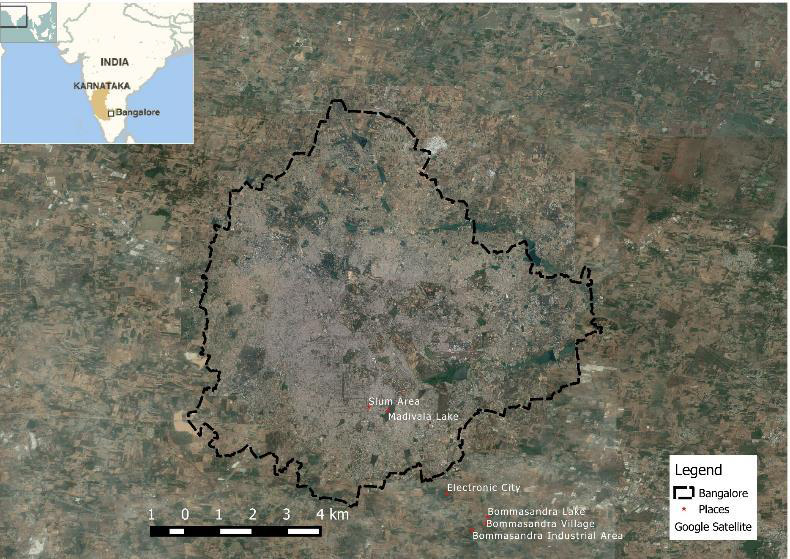 Bangalore city, capital of the state of Karnataka state, is one of the fastest growing cities in India in the past two decades and is an important economic centre in the state. However, similar to other Indian cities, its growth is marred by spatial and income inequalities. According to official estimates, 16.45 per cent of Bangalore’s 8.4 million population live in 597 slums. The urban poor often live in government land though private and railway lands are occupied in some cases. Deprived of basic amenities such as health services, proper sanitation and water access, living in these areas makes people vulnerable to diseases and extreme events and other hazards. The rise of these informal settlements is curtailed through slum clearance (which often denotes slum demolition) with reports of thousands of families being evacuated from their homes in a single night! At the same time, the city has seen an unprecedented rise in construction of private residential enclaves and ‘gated-communities’, often advertised as secure and self-sufficient communities that cater to high-income groups.

This urban dichotomy presents a pressing challenge for city planners. The City Development Plan for Bangalore under the Jawahar Lal Nehru National Urban Renewal Mission (JnNURM, GoI 2006) took special notice of these inequities and laid down guidelines for providing basic services to urban poor. However, benefits from JnNURM schemes did not benefit slum dwellers because of inadequate fund allocation and development of plans without consulting stakeholders. Additionally, most schemes are critiqued for worsening existing conditions because they promote resettlement of slum inhabitants to Economically Weaker Sections (EWS) quarters which are often far from livelihood opportunities and lack basic amenities such as access to water and sanitation facilities.

So far, the primary focus of city and state governments has been economic growth and employment creation through large-scale infrastructure development projects. Public policy is skewed in favour of the globalised hi-tech growth sector and does not recognise slums and informal settlements as legitimate parts of the city. Such a model of urban development, characterised by zone-based infrastructural development, intensifies inequity among the rich and the poor in terms of access to services, employment opportunities and development benefits. Existing governance issues such as lack of adequate funds, an understaffed municipal government, overlapping and unclear jurisdictions and lack capacity to tackle existing and emerging urban problems exacerbate Bangalore’s unequal growth trajectory.

This scoping visit was part of ongoing research under the Adaptation at Scale in Semi-arid Regions (ASSAR) project. ASSAR is funded by IDRC and DFID under the Collaborative Adaptation Research Initiative in Africa and Asia (CARIAA).

Manish Gautam is a consultant at the Indian Institute for Human Settlements.