We need to talk about aid

Why is Australia’s aid funding so frequently in the budget crosshairs?

Aid advocates need to build consensus in the Australian public to prevent budget cuts to the sector, writes Kylie Bourne.

This week there were hints that Australia’s aid budget will be cut in the coming budget. Again. Although these rumours were quickly quashed we should be asking ourselves why overseas development assistance continues to appear in the budgetary crosshairs.

Australia is a wealthy, developed nation yet our Asia Pacific region is home to two thirds of the world’s poor, with over 700 million people living on less than $1.25US a day. Levels of poverty in our region make it especially difficult for poor nations to deal with natural disasters, such as tsunamis and cyclones.  The Australian aid program focuses not just on short-term poverty alleviation but on longer term capacity building in developing countries.

Australia has committed to spend 0.7 per cent of Gross National Income (GNI) on effective aid by 2020 and despite bipartisan commitment to a target of 0.5 per cent of GNI prior to last year’s budget (although the timing of this target had been variously delayed), Australia’s aid budget was a ‘lifter’ in 2014, contributing disproportionately to forecasted savings.  Although adding up to only 1.22 per cent of government spending, the cuts to aid accounted for 21 per cent of projected savings in the 2014 May budget.

When further budgetary savings were sought later in the year, aid was “one of the first things to be ‘slashed’.”  There was a 33 per cent cut to multi-year aid budgets and Australian aid was set to be at its lowest level since 2005-06, despite an estimated 40 per cent growth in GDP since that time and despite the economy’s weathering of the global recession that so troubled those of other developed nations.

The reductions provoked two broad types of responses; first from aid advocates who decried the cuts and framed moral arguments against them, and second from those prosecuting or supporting the prosecution of the cuts who cited concerns about Australia’s capacity to pay for development assistance or about the efficiency of the aid program itself. 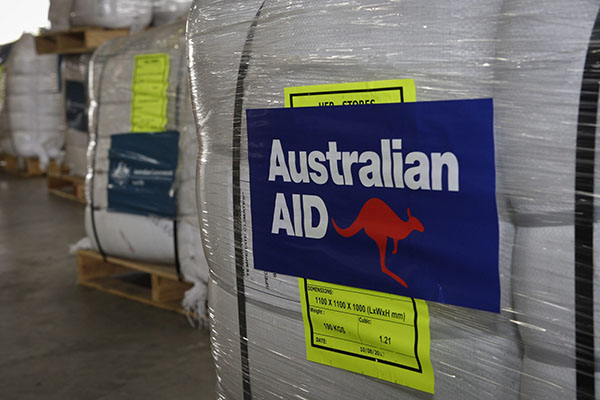 On the one hand, heads of NGOs labelled the cuts as ‘immoral’ and highlighted the humanitarian motivations for providing aid. On the other there were repeated claims that Australia could not afford to maintain current levels of aid spending, or that referenced historical instances of ineffectiveness to justify the cuts. Although there were a few online commentaries that sought to explain the complexities of development work, the effectiveness of the Australian aid program or to rectify common misconceptions, there was very little public debate about the cuts. Polls even indicated that even those from the left “may be in favour of pruning it (aid spending), should something have to go.”

Clearly this indicates that aid advocates need to build consensus in the Australian public for foreign aid. Yes, there are very good moral reasons for giving foreign aid to the vulnerable and it is uncontroversial to mount strong efforts to eliminate poverty wherever we find it. However, as moral philosophers -Thomas Pogge and Peter Singer among them – know only too well, motivating people to give to “distant strangers” by appealing to people’s values and standards is unlikely to work.  This may be why decrying the recent cuts as broken promises , as immoral or as a reflection of our own national character does not garner the expected support. It may be best to put those arguments to one side and to focus instead on explaining the complexity of the development sector, its aims, its purposes and even the role it plays in promoting peace and security in our region.

If the development sector is interested in building support then it must counter the misinformation and tabloid-esque soundbites that now so readily influence public opinion. This won’t be easy: fundraising pop-songs are a thing of the past, as are sleek internet campaigns. Development is multi-faceted and nuanced. Good development builds relationships and trust. It is about the long game. And it is hard. Conversations will be difficult and will need to be carefully constructed so that they suit our capacity to absorb complex information. Yes we’ll need data but we’ll need stories too.

Although spending time and resources advocating domestically for foreign aid may stick in the craw for some, it is impossible to imagine that the sector is safe from further cuts if the public is not onside. For the sake of the hundreds of millions of those living in poverty in our natural disaster prone region – and indeed for our own – we need to start talking about foreign aid.