Wind and solar could make light work of climate change

The world can avoid a climate calamity, but only if renewables do the heavy lifting

Policymakers need to recognise solar photovoltaics and wind as the cheapest solution to global warming in a short time frame, Andrew Blakers and Matthew Stocks write in this chapter from Securing our Energy, the new publication from the ANU College of Asia & the Pacific.

Solar photovoltaics (PV) and wind energy are growing fast enough to eliminate global coal, oil and gas consumption before 2050, resulting in global greenhouse gas emission reductions of 85 per cent – with the time frame depending mostly on politics.

The exponential rise and rise of PV and wind offers the only realistic chance of avoiding dangerous climate change. Indeed, it is difficult to see any timely solution to climate change that does not involve PV and wind doing most of the heavy lifting. No other solution comes even close.

Most of Australia’s greenhouse gas emissions are due to the use of fossil fuels (Figure 1), which is typical for industrialised countries. Land clearing and agricultural emissions constitute most of the rest. However, PV (with assistance from wind and other renewables) is on track to eliminate these emissions within 20 years. (Click to see Figure 1) 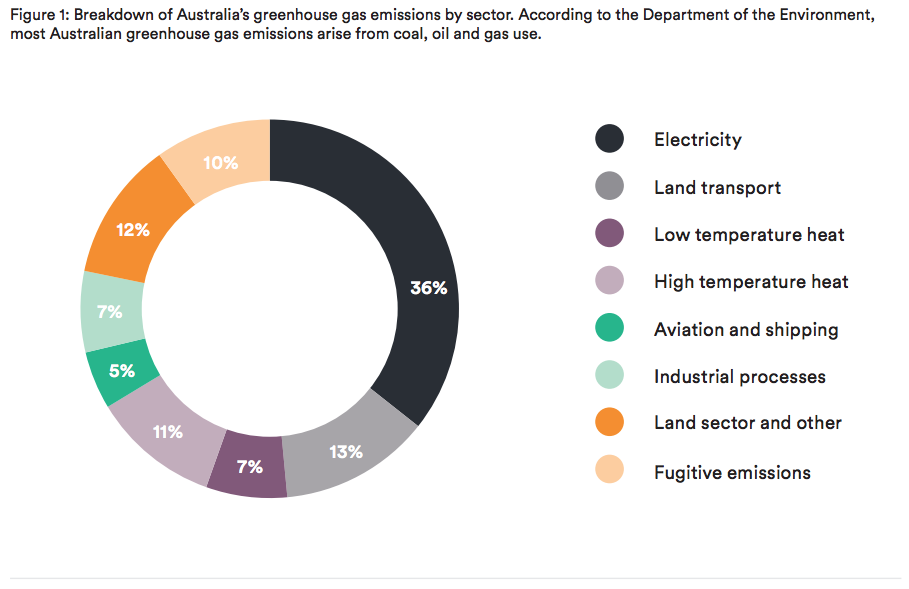 How Russia is fuelling Asia

In particular, silicon PV is doing for energy and greenhouse gas emission reductions what the silicon chip did for computing and electronics.

Unfortunately, attempts to capture and store large quantities of CO2 emissions from burning fossil fuels have come to naught due to technical difficulties and high cost. Thus, coal, oil and gas use must be eliminated to curtail global warming.

A replacement is needed that, ideally, meets all the following criteria:

Solar PV meets all these criteria, while wind energy meets many.

Together, PV, wind and other renewables can eliminate coal, oil and gas use and thereby reduce greenhouse gas emissions by 85 per cent. Renewables already dominate capacity markets (Figure 2) since both wind and solar overtook coal and gas in 2015.  (Click to see Figure 2) 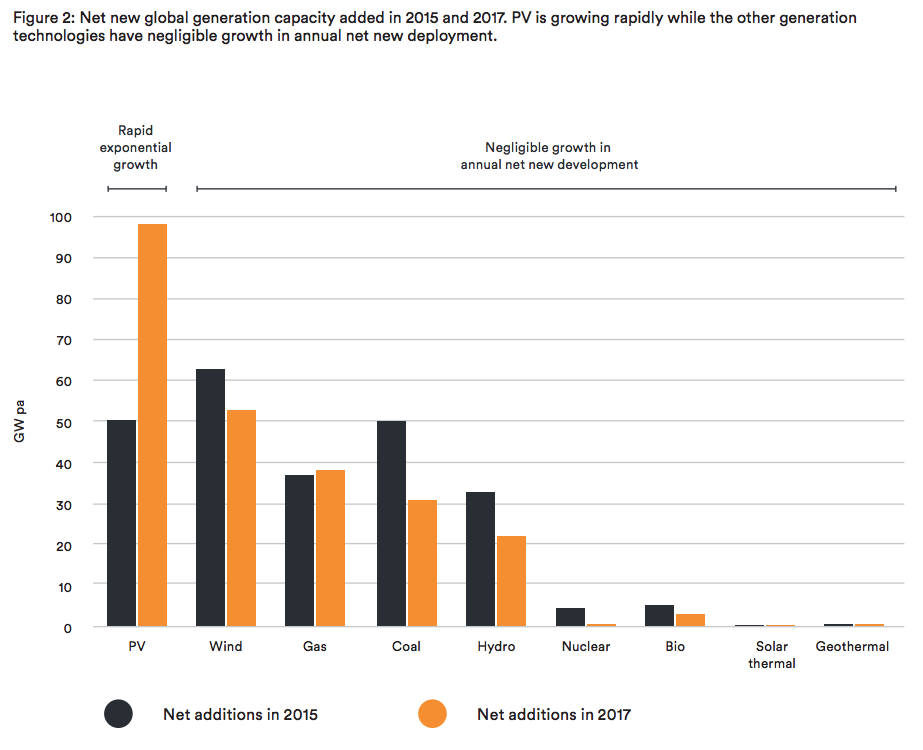 PV and wind depend only on energy from the sun, which will be available for billions of years. Complete replacement of all fossil fuels requires solar and wind collectors covering much less than one per cent of the world’s land surface area. A large proportion of collectors are installed on rooftops and in remote and arid regions, minimising competition with food production and ecosystems.

The solar resource is ubiquitous – we are unlikely ever to go to war over access to sunlight or wind. Most of the world’s population lives at low latitudes (less than 35 degrees), which has good solar availability that varies little with the seasons (unlike at high latitudes).

Complementing this, wind energy is also widely available, particularly at higher latitudes. Very wide distribution of PV and wind collectors over most regions of the world means that everyone has local energy generation, and this helps to minimise disruptions from natural disasters, war and terrorism. In addition, PV and wind have minimal environmental impact and water requirement. PV uses raw materials that are effectively in unlimited supply – silicon, oxygen, hydrogen, carbon, aluminium, glass and steel – plus small amounts of other materials.

Wind energy is an important complement to PV because it often produces at different times and places, allowing a smoother combined energy output. In terms of annual electricity production, wind remains ahead of PV, but PV is growing much more rapidly. As the wind energy resource is much smaller than the solar resource, PV will dominate in the end.

Other low emissions energy technologies can realistically play only minor supporting roles. The solar thermal industry is hundreds of times smaller than the fast-growing PV industry (due to higher cost), meaning an extravagant growth rate sustained over many decades would be required to catch up.

The resource base for hydro, geothermal, wave and tidal is significant only in some regions. Energy from biomass suffers from very low efficiency of sunlight capture, and unresolvable conflict with food and ecosystems for land, water, fertilisers and pesticides. Nuclear is too expensive, and planning and construction rates are far too slow, to catch up with PV and wind.

Stabilising an electricity grid with high levels of variable PV and wind is straightforward and comprises storage and strong interconnection with high voltage cables over large areas to smooth out the effect of local weather. By far the leading storage technologies are pumped hydro and batteries, with a combined market share of 97 per cent, according to the DOE Global Energy Storage Database’s global project installations over time.

The 'nexus' between food, energy and water security

In Australia, PV and wind comprise effectively all new generation capacity. About 10–11 gigawatts of PV and wind is expected by the Federal Government’s Clean Energy Authority to be installed in 2018 and 2019, compared with peak demand of 36 gigawatts in the national electricity market. This installation rate is sufficient for Australia to reach 50 per cent renewable electricity by 2024 and 100 per cent in the early 2030s – meeting Australia’s Paris emissions target entirely by emission reductions within the electricity system (as explored further in the paper, Australia’s renewable energy industry is delivering rapid and deep emission cuts).

The cost of meeting Australia’s Paris target is zero because of the low and declining cost of PV and wind. Globally, the share of annual generation by PV and wind is no longer invisible – together they are producing about eight per cent of the world’s electricity and they are growing much faster than competitors. The worldwide growth rate of new PV and wind capacity over the past five years is 28 per cent and 13 per cent per year respectively. The net new installation rate of all other generation technologies is static, falling or miniscule. 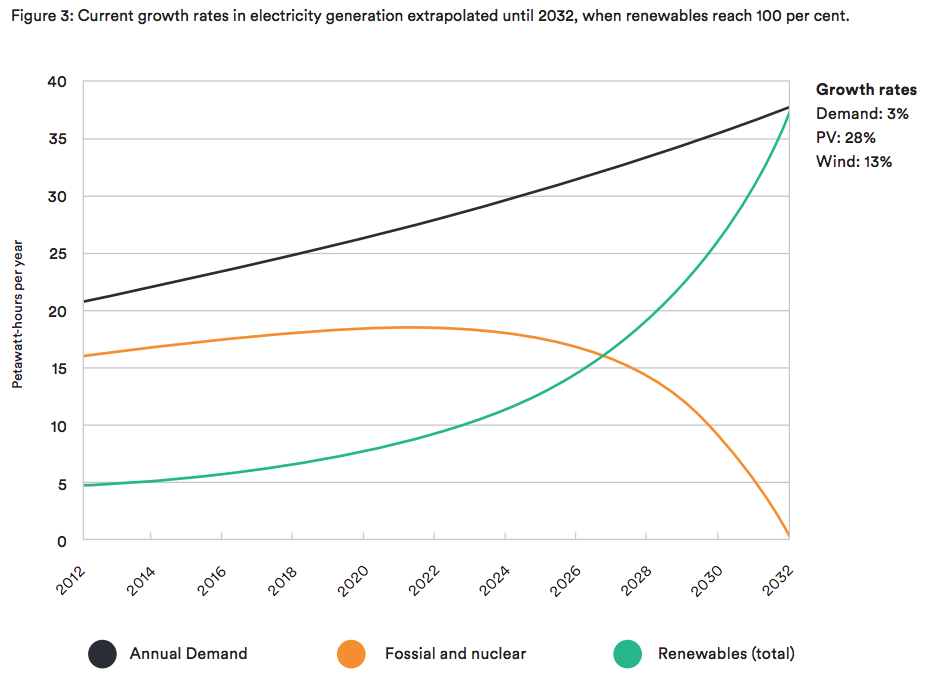 Deep cuts (85 per cent reduction) in greenhouse gas emissions require fossil fuels to be pushed out of all sectors of the economy (not just electricity). The path to achieve this is by electrification of all energy services. Straightforward and cost-effective initial steps are to:

These trends are already well established and would yield a 56 per cent reduction in current greenhouse gas emissions (Figure 1) at zero net cost.

The best available prices for PV already match the current wholesale price of gas in Australia ($10–15 per gigajoule after losses according to the Department of the Environment and Energy’s Gas Price Trends Report 2017). The outlook for the oil and gas industries is poor as PV prices continue to fall.

High temperature heat, industrial processes, aviation and shipping fuel, and fugitive emissions can be displaced by renewable electricity and electrically produced synthetic fuels, plastics and other hydrocarbons. There may be a modest additional cost depending on the future price trajectory of PV and wind.

Taken together, the amount of electricity required to completely displace fossil fuels is about three times current electricity consumption. In other words, worldwide electricity production must triple.

Remarkably, current annual global growth rates of PV (with support from other renewables) are enough to eliminate coal, oil and gas use in the 2040s (Figure 3 shows the first 14 years).

Continued rapid growth of PV and wind (with support from other renewables) will minimise dangerous climate change with minimal economic disruption. Many policy instruments are available to hasten their deployment.

Government policy should recognise PV and wind as the by far the cheapest route to deliver the necessary solution to global warming in a short time frame.

This is a piece from Securing our Energy, a collection of expert essays from the ANU College of Asia & the Pacific on the challenges and opportunities of energy security, energy access and climate change. You can read the essays for free here.

Andrew Blakers is a Professor of Engineering and Public Policy Fellow at ANU.

Dr Matthew Stocks is a fellow at the ANU Research School of Engineering where he investigates energy storage and photovoltaic technologies and integrating high amounts of renewable energy in Australia’s electricity network.