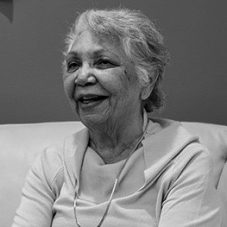 Matilda is a proud Ngambri-Ngunnawal woman who has a long and respected association with the ANU. She was instrumental in establishing the Tjabal Indigenous Higher Education Centre in association with the Indigenous students on campus in 1989. In her position as a Liaison Officer at the Department of Aboriginal Affairs for Canberra and the district Matilda arranged accommodation, food, finance, warm clothing, as well as social and emotional support networks for Indigenous ANU students. She has maintained close connections with Tjabal, mentoring students during their studies and readily taking on the voluntary role of Elder-in-Residence.

Matilda’s ties with the ANU have been an extension of her determined pursuit of social justice for Indigenous people in the wider community. She was a tireless supporter of the Aboriginal Tent Embassy when it was established in 1972, helped to establish the Aboriginal Legal Service in Queanbeyan in the 1980s and has served as a member of the Aboriginal Justice Advisory Committee.

Matilda established and is now Chair of the Ngambri Local Aboriginal Land Council, and is a member of many Canberra and Queanbeyan Indigenous committees and organisations. As noted by then ACT Chief Minister Jon Stanhope in naming her 2006 Canberra Citizen of the Year: “It is hard to think of any organisation involving Indigenous interests with which she has not been involved”.

In 2008 Matilda began the tradition of delivering the ‘Welcome to Country’ at ANU, which she also performed at Prime Minister Kevin Rudd’s Apology to the Stolen Generations, as well as at the opening of Federal Parliament in that year. Matilda has continued this wonderful tradition at key ceremonies at The Australian National University, including the 70th Anniversary celebrations in August 2016, and at the commencement of each academic year.

In addition to her many community service and support roles, Matilda is an accomplished artist, having contributed to the publication of several books and exhibited paintings, one of which hangs in the ACT Legislative Assembly.