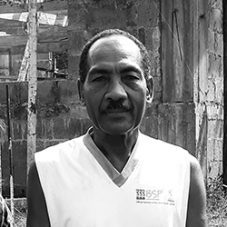 Sailosi Ramatu is the Turaga ni Koro (village headman) and a traditional leader of Vunidogoloa village in Fiji. He is also the representative of his districts to the Provincial Council. In his seventeen years as headman, Ramatu has won the trust of his people. His leadership calibre has led Vunidogoloa and the four villages within his districts to be resilient communities.

He is a strong leader by never allow the existing government system to fail his course. He developed a good village governance structure and enforce faith as its foundation.

Ramatu is a strong community advocator in social, environment and climate change issues. He played an important role in the process of relocating Vunidogoloa village. He led his village two kilometres uphill to become the first community in Fiji permanently relocate due to climate change.

Ramatu has become a transformational leader and speaker in national forums, regional meetings and workshop, focused on climate change adaptation in Fiji and other Pacific Island Countries. Discussing his relocation experience and advising on the process. These include the 2014 Regional Climate change workshop, the Pacific Council of Churches ahead of COP 24 in Poland Regional Climate Change workshop at Novotel Hotel. Fiji (2014), the Transitioning Millenium  Development Goal to Sustainable Development Goal (2015), the Climate Change  Preparation Meeting for COP 23 at the Pacific Council of Church in Suva Fiji (2017), and the High-Level Dialogue on Future of Work in the Pacific (2017).