China’s media strategy in the Pacific

How foreign powers are seeking to influence the region’s airwaves

Pacific media is set to be one of the core avenues of competition between Australia and China in the region, Denghua Zhang and Amanda H A Watson write.

In recent years, China has both used its own media outlets and engaged with Pacific media organisations to ‘tell the China story’ in the region. As China becomes a major player in the Pacific, it is important to compare its media strategy with Australia’s.

Engaging with its partner countries’ media sectors is high on China’s agenda. At its 2018 national conference on publicity and ideological work, Chinese President Xi Jinping stressed that China would step up external efforts to ‘tell Chinese stories well’ and ‘make the voice of China heard’.

China’s COVID-19 diplomacy in the Pacific

Second, Chinese diplomatic missions actively use local media for publicity. Between August 2016 and September 2020, Chinese ambassadors to Fiji, FSM, Papua New Guinea (PNG), Samoa, Tonga and Vanuatu published a total of 92 articles in the mainstream newspapers of these countries, such as Fiji Sun, Kaselelhie Press, Post-Courier, Samoa Observer, Matangi Tonga and Daily Post. All were clearly labelled as authored by the Chinese ambassador or provided by the Chinese embassy.

As Figure 1 shows, more than a quarter of these articles were about Chinese foreign policy or aid. Their second most common focus was Chinese aid to PICs to combat COVID-19, strong evidence that Beijing has prioritised media outreach in the Pacific to build a positive image of its handling of the pandemic. 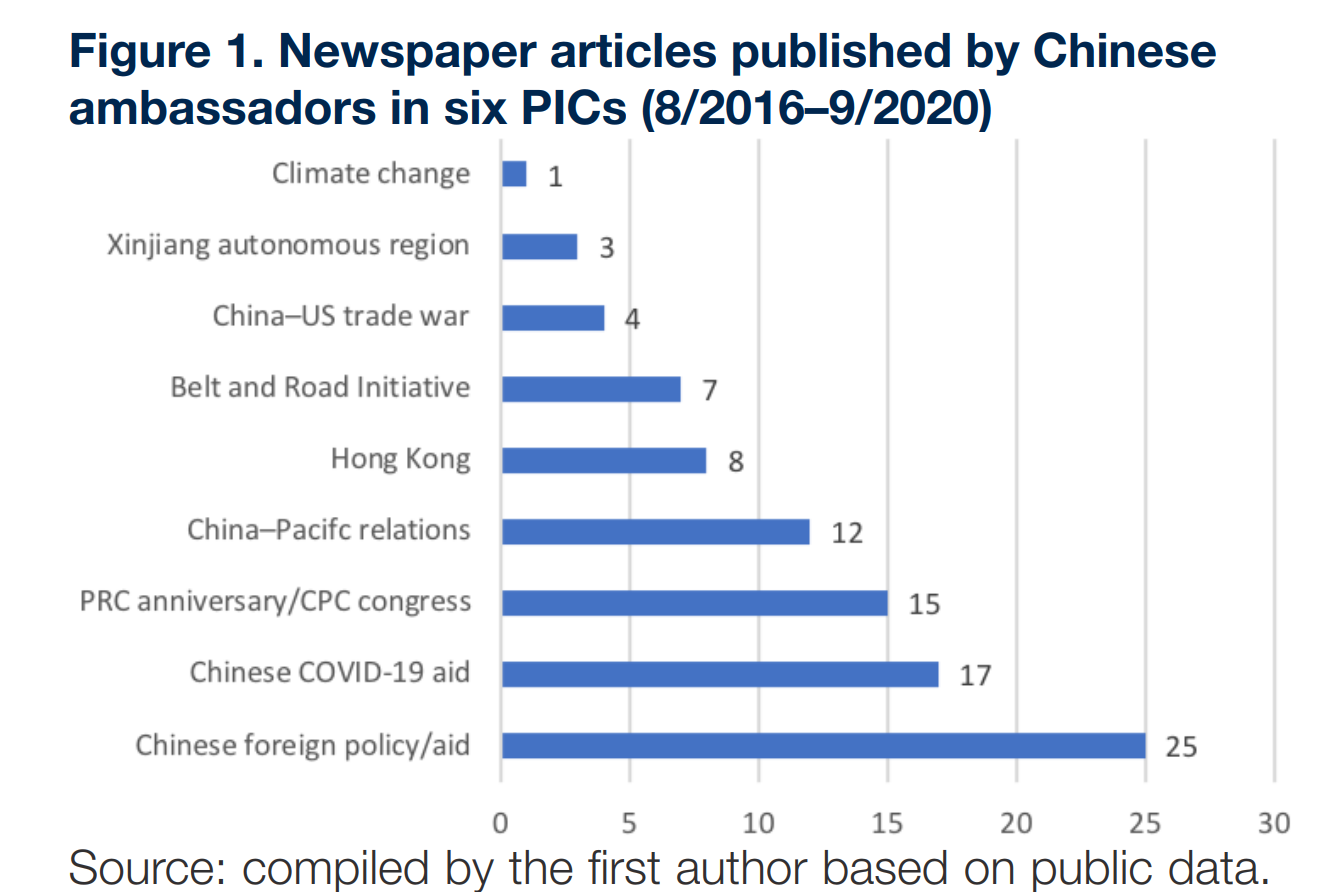 In addition to publishing articles, Chinese ambassadors have actively sought interviews with Pacific journalists and organised press conferences to convey China’s official messaging on selected topics. Figure 2 summarises the focuses of these three types of activities in China’s three largest partner PICs — PNG, Fiji and Vanuatu — between 2008 and September 2020.

Compared with Figure 1, the notable difference lies in China’s focus on sovereignty issues with places such as Taiwan, Tibet, Xinjiang, Hong Kong and the South China Sea. This is not surprising as China seeks the votes of PICs in international and regional arenas. 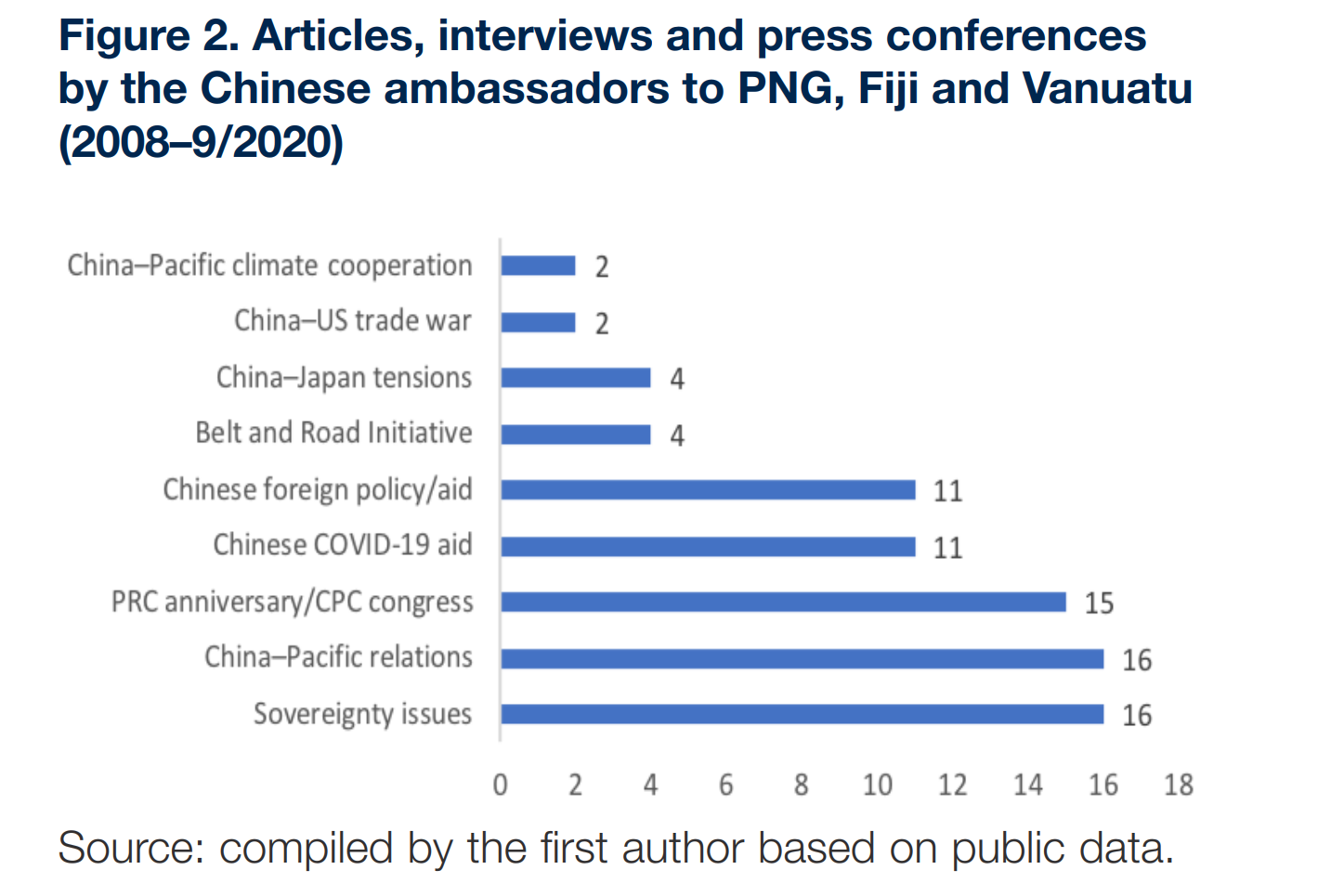 China’s three other types of media activities include sponsoring Pacific journalists’ visits to China for training or exchanges, constructing media facilities, and fostering ties with local Chinese media in PICs.

For example, Pacific journalists attended capacity training programs in China in August 2015, October 2016 and June 2018. In March 2019, China funded the construction of the press gallery in Fiji’s parliament. Chinese embassies have also made efforts to establish close relations with Fiji Daily, the country’s largest newspaper in Mandarin Chinese, and Vila Times, the first Chinese-English bilingual newspaper in Vanuatu. In March 2018, the Chinese ambassador to Fiji Qian Bo encouraged Fiji Daily to play its role in ‘telling the China story well’ in Fiji and contribute to China–Fiji relations.

Compared with China, Australia’s media has had a lengthy presence in the Pacific, primarily through the government-funded yet independent Australian Broadcasting Corporation (ABC). However, there have been notable changes in the past decade. Funding for the Australian television service broadcasting to the Pacific region was substantially reduced in 2014, which led to cuts in the amount of broadcast content tailored for Pacific audiences and, in 2017, Radio Australia shortwave broadcasts to the Pacific ended. These cuts were keenly felt in many places and may affect Australia’s influence in the Pacific region.

Radio Australia nonetheless continues to provide coverage of regional issues through 13 FM radio stations across the Pacific. Daily news content about the Pacific is also available online from the ABC. Additionally, the ABC has an arm that undertakes activities intended to strengthen the media in the Pacific region.

In line with Australia’s Pacific Step-Up policy to boost influence in the region, a new scheme funded by the Australian government will provide commercial television content, including drama, lifestyle, sport and children’s programs, to 10 free-to-air television stations in seven Pacific nations. Although it has been welcomed by some Pacific television executives, the scheme has been criticised by others for provision of culturally irrelevant content.

Shailendra Singh, head of the journalism program at the University of South Pacific, asserted that funding to assist with the production of local content would have been more beneficial. It has also been argued that the initiative is duplicating the efforts of the ABC.

s the geostrategic competition between China and PICs’ traditional partners intensifies, it is likely that countries will look for ways to influence the discourse in the region. Foreign powers may choose to support and engage with local Pacific media, or they may prefer to disseminate their messages through their own outlets. Whether this content is able to capture the hearts and minds of Pacific Islanders remains to be seen.

This article is based upon a paper published by the ANU Department of Pacific Affairs (DPA) as part of its ‘In brief’ series. The original paper can be found here.

Denghua Zhang is a research fellow in The Australian National University’s College of Asia and the Pacific.