In-country testing is ramping up across the region this week, with testing capacity now restored in Papua New Guinea, Hugh McClure writes.

The Commonwealth of the Northern Mariana Islands has been the Pacific region’s COVID-19 hotspot this week, with cases in the country rising from 14 to 19. This breaks an extended period in which no new cases were recorded in the country. These positive test results highlight the fragility of assessments that countries are COVID-19 free where testing continues to be limited. 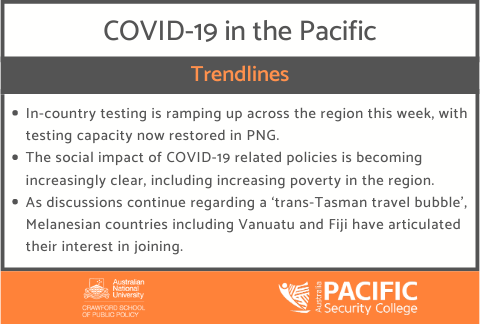 As normalcy continues to return in the Pacific region this week, confirmed new cases have been largely static. In Guam just one new case has been reported, bringing that territory’s total to 151. In Melanesia, all of Papua New Guinea’s (PNG) eight cases and 14 of Fiji’s 18 cases are now reported to have recovered. Elsewhere, French Polynesia has reported 60 confirmed COVID-19 cases, with 56 recovered. In the Indonesian province of Papua there have been 308 cases and six deaths confirmed, while in the West Papua province 70 cases and one death has been reported, although there are fears that these figures are likely to be significantly higher, noting a substantial outbreak in the mining hub of Mimika.

It is worth noting that the most affected parts of the Pacific lie on the region’s edge, close to borders with Asia (Indonesia’s Papua and West Papua provinces, Guam, Commonwealth of the Northern Mariana Islands) and South America (Rapa Nui), and largely in the region’s territories, as opposed to in independent states. Debate continues regarding the rotation of officials from the French mainland in French Polynesia, following one officer providing a positive COVID-19 test upon reporting for duty in Tahiti.

In welcome news this week, in-country testing has come back online in PNG, with test kits and Australia Defence Force personnel arriving in the country and community testing projects launching in the four provinces which have reported COVID-19 cases. Similarly, Vanuatu – which is currently without any confirmed COVID-19 cases – received its first 120 testing cartridges this week, with Samoa and Tonga also receiving test kits from Australia this week. Further, Australia has provided rapid testing capacity to Fiji, Kiribati, Nauru, and PNG this week, with rapid test kits provided to nine additional countries over the coming fortnight.

The social effects of COVID-19 restrictions are becoming increasingly apparent in the Pacific region. The International Labour Organization says that the impact of the pandemic and associated closures could plunge tens of thousands of people in the Pacific into poverty, labelling COVID-19 worse for the region’s economy than the Global Financial Crisis.

In Samoa, where no cases of COVID-19 have been confirmed, the crumpling of the tourism industry – a centrepiece to the national economy – has resulted in more than 1,000 people out of the formal job system. The Samoa Victim Support Group has reported a marked increase in family violence since the country went into lockdown. In French Polynesia, lost revenue is estimated to be worth $1.2 billion with 25,000 people out of work. Meanwhile, the impact on those informally employed in PNG and elsewhere, such as vendors selling fresh produce in urban areas whose supply chains have been disrupted due to travel restrictions, has also been reported to be substantial.

In Australia and New Zealand there has been substantial talk of a ‘trans-Tasman travel bubble’ this week to allow for the movement of people between the two countries. Prominent figures in Vanuatu and Fiji said they would like to see their countries included in such a policy, an idea which Australian federal MP, Dave Sharma, said has merit.

In light of the low number of cases in many Pacific Island countries, and in recognition of the substantial interdependencies between the economies of the Pacific Islands and Australia and New Zealand, some argued that the inclusion of Pacific Island countries into such a bubble would pose low health risks, while supporting the tourism sector and helping address labour market shortages through ongoing labour mobility schemes. While the matter has been shelved by the Australian and New Zealand prime ministers for the time being, it could form part of a potential exit strategy from the travel restrictions in time.