There are concerns in Papua New Guinea that COVID-19 testing has been too slow, whilst Fiji Airways is looking to make their flights ‘COVID-safe’, Hugh McClure writes.

Samoa is the most recent Pacific Island country to be evicted from the increasingly small club of nations yet to record their first case of COVID-19. Samoan authorities this week detected their first case of the virus, a sailor who had returned to the country from Auckland. The individual, who has been in quarantine since arrival in Samoa, initially returned a negative test result but later tested positive. The Samoan prime minister (PM) has called for calm, as a sense of panic has grown in Apia and across the country. The State of Emergency has now been extended until 23 December and the quarantine period has been lengthened from two weeks to three.

Here is a snapshot of policy responses to COVID-19 in the Pacific region, correct as of 12pm AEST, 24 November 2020. 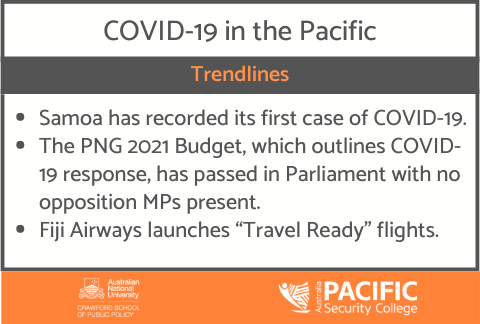 PNG’s 2021 budget has been pushed through parliament during an extraordinary sitting, which occurred with no members of the opposition present for scrutiny or debate. According to accounting firm, Deloitte, the budget will focus on the agricultural and SME sectors, citing the impact they have faced during COVID-19. This step which has been praised, given that these sectors for 85 per cent of employment in the country.

There is concern in PNG this week, after health officials in Western Highlands province reported that it has taken 28 days for a positive test result to come back. Health authorities say that the lengthy delay poses a threat to the country’s COVID-19 response.

The Parliament of Vanuatu has this week passed the country’s $633 million 2021 national budget. Frontline health workers in the country are entitled to a supplementary allowance of $219 in addition to their salaries. Also in Port Vila, the Reserve Bank of Vanuatu has hosted regional reserve bank governors from across the Pacific for a virtual two-day conference, entitled ‘Emerging from the COVID-19 Pandemic’.

The Director of the Vanuatu Department of Customs and Revenue has expressed concern about the number of small craft travelling in the region, saying that it threatens border closures.

Fiji Airways has launched a ‘Travel Ready Flight’ which it says redesigns travel for a COVID-safe world. The flight was for staff and guests and highlights steps taken by the carrier to prepare for the reopening of borders. Also in preparation for border openings, police officers in Fiji have begun training exercises in response to the prospect of travellers entering the country.

Presentation of the Solomon Islands Public Health Emergency Bill has been deferred to 2021. PM Sogavare has said that the Bill, which promises to outline steps for pandemic management, has been delayed due to the health ministry’s focus on responding to the COVID-19 pandemic. The Solomon Islands parliament voted to ban Facebook this week, in a move which may restrict access to information about COVID-19 in the country.