New Caledonia has recorded its first new cases in two months amid rising tensions with France, whilst Papua New Guinea has faced internal pressure to ease COVID-19 restrictions even as cases in neighbouring Indonesia continue to rise, Hugh McClure writes.

After 52 days without recording an additional positive COVID-19 case, two new cases have been reported in New Caledonia this week. Elsewhere in the region, the total in Guam has reached 175. On the region’s border, Indonesian authorities report that the total number of cases in Papua province has reached 725, with six deaths, while there are 168 positive cases reported in West Papua province, with two deaths confirmed.

Here is a snapshot of policy responses to COVID-19 in the Pacific region, correct as of 12pm AEST, 2 June 2020. 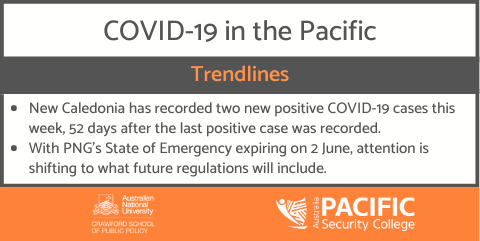 The first individual was transferred from the quarantine hotel where they were located to a hospital on 28 May. A government statement said the individual was not contagious and showed biological traces of an infection which was more than a month old. A second case for the week was recorded on 1 June, and involved an officer who was part of a squad flown in from France on 19 May.

While the government has announced that the squad tested negative before leaving France and had been held in isolation, the case is likely to fuel tensions which have been consistent over recent weeks regarding the rotation of French officers through New Caledonia.

Such tensions have included riots at Noumea Airport, and spiked with Caledonian Union President Daniel Goa asking the French High Commissioner to leave New Caledonia, arguing that France had failed to respect the Noumea Accord. Meanwhile, the next independence referendum has been tentatively postponed until 4 October 2020 due to COVID-19 restrictions.

Six weeks on from the most recent positive COVID-19 case recorded, Papua New Guinea’s (PNG) State of Emergency expired on 2 June. Prime Minister Marape has highlighted that although health and technical authorities have encouraged his government to continue the State of Emergency, other options will be considered, with a new Act of Parliament to be introduced to govern COVID-19 related restrictions and social distancing. Political opinion on the issue remains divided, with the Opposition and union movement having encouraged the State of Emergency’s repeal, while National Capital District Governor Powes Parkop has called for its extension.

The continued increase in cases across the border in Indonesia’s Papua Province remains PNG’s greatest cause for concern. Worries exist that an unknown number of people may have entered PNG whilst the border went unmanned for four hours this week, during which time police and soldiers protested for state of emergency support payments. This week, 28 drones have been procured from the Australian military to assist in border surveillance.

This week has also marked Prime Minister Marape’s first anniversary in office. With the country facing economic hardship as a result of COVID-19 restrictions, he has taken the opportunity to highlight his economic credentials. Amidst intensifying scrutiny from his predecessor, Peter O’Neill, Marape has argued that economic growth has been higher in his first year in office than it was during Prime Minister O’Neill’s final year, reiterating his commitment to non-resources-led growth.

Despite this, the National Research Institute released advice this week that the government should do more to support the economy and boost consumer demand, beyond the recent $1.6 billion stimulus package.