If China, Japan and South Korea want a ready-made area for collaboration at this week’s Trilateral Summit, they need look no further than the challenge of population ageing, Lauren Johnston writes.

Ahead of the gathering, Chinese President Xi Jinping held a teleconference with Japanese Prime Minister Shinzo Abe – a sign that China sees its ties with Japan as important for its policy of building a goodwill community of ‘common destiny’. During the summit, Chinese Premier Li Keqiang will also greet 84-year-old Emperor Akihito, who in April 2019 is due to become the first Japanese Emperor to abdicate in over 200 years.

The retirement of Emperor Akihito is especially symbolic for these three countries. Over the coming decades, China, Japan and South Korea will be confronted by the most daunting population ageing scenarios ever seen.

At the same time, the three countries are home to some of the world’s lowest fertility rates, and, unlike many other rapidly ageing population OECD member countries, famously low immigration levels. In other words, the lines in Figure 1 will only rise in gradient. (Click to see Figure 1) 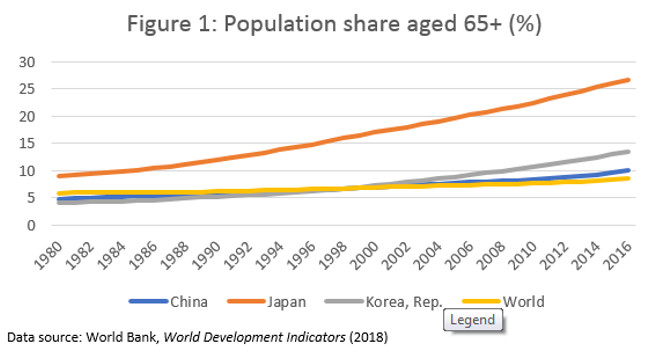 One of the big differences between the three cases of population ageing is when demographic transition – the shift from a youth-filled population to an older demography – happened in the economic development cycle.

Japan was an advanced industrialised economy before it entered the population ageing category (measured by seven per cent or more of the population aged 65 and over). The same goes for South Korea, although the number of years between its economic and demographic transitions were decades fewer than it was for Japan. China, meanwhile, famously confronts the challenge of ‘getting old before rich’.

The importance of the timing of population ageing in a country’s economic cycle has in general been given scant attention by the economics community – outside of China at least.

Within China, however, the fear that ‘getting old before rich’ would make it challenging, if not impossible, to complete the industrialisation process has led to a rich domestic literature on the relationship between early demographic transition and development. There is a negligible equivalent literature in countries that, like Japan, aged after getting rich. South Korea is a case of getting rich before getting old, but only just.

And the timing of population ageing in development may be a key element to understanding the consequences of ageing for the economy. In Japan, for example, the educational gap between retirees and younger workers is less than in China, where educational standards have increased dramatically in very recent decades.

For China, this offers the potential of a leapfrog in human capital-led productivity. Japan, on the other hand, must rely on its diminished working-age population being able to almost exponentially push the frontiers of productivity in order to keep up with the growing costs attached to population ageing.

Another difference lies in consumption and income differentials between cohorts. In Japan, today’s new labour force entrants can expect to see much less income growth over their lifetime than the same entrants in China, where the economy is growing more quickly and incomes are rising disproportionately.

In a further example of this trend, Tokyo Stock Exchange-listed hair dresser QB Net is reportedly shifting its expansion plans not to adding value for working-age Japanese consumers, but to home visits for older Japanese and to new frontiers abroad.

Live long, prosper, and multiply? The consequences of China's One Child policy

In China, however, the consumption of current and imminent retirees has played a limited role in the country’s recent growth miracle. It is not their consumption that is targeted by China’s increasingly sophisticated marketeers, but rather the more consumer-oriented youth for whom a prosperous China is taken for granted.

According to the World Bank’s World Development Indicators (WDI), over the period 1980-2016 (broadly China’s era of opening and reform), household final consumption expenditure averaged 45 per cent in China, and 56.1 per cent in Japan. If an increasing share of the population is experiencing flat income growth, this would thus be expected to have greater impacts on the economy of ‘old after rich’ Japan.

WDI data shows that more than 85 per cent of world GDP is generated in the roughly one-third of countries which are confronting rapid population ageing. And yet, links between demography and the macroeconomy are only starting to receive a lot of attention within the economics community. And it is important within that body of literature that attention also be paid to the economic development timing of the onset of demographic transition – this may have a big impact on the weight of the older cohort in the economy.

By the time Toyko hosts the 2020 Olympics, 14 per cent of Japan’s population will be aged 75 and over. The extreme of Japan’s ‘old after rich’ ageing is a canary in a coal mine for the rich world. The sheer scale of China’s demography and its importance to global growth make its experience of population ageing as a developing country important to the world also. South Korea is something of the middle ground.

The entire OECD confronts rapid ‘old after rich’ population ageing. Meanwhile, by 2030, some three-quarters of the world’s older population will be living in developing countries, not rich ones. This makes it essential that policymakers in these countries urgently learn from the experience of China in seeking to avoid the middle-income trap amid the particular challenges of ‘getting old before getting rich’.

For the three giants of East Asia attending this week’s Trilateral Summit, a ready-made ‘win-win-win’ area of collaboration would be to establish a common platform for economic demography research. This would take advantage of China’s deep literature on ‘getting old before getting rich’ and draw better comparative lessons from the very different ‘old after rich’ cases arising in Japan and South Korea.

The intent would not only be to enhance growth and provide for the rising number of elderly in all three cases. It would also be to provide lessons for understanding the economics of population ageing around the world, in rich and poor countries, today and tomorrow.