How will China’s money talk?

As China becomes the world’s largest economy, trade inter-dependence in the region could translate to political clout.

In future it may use its trade strength as a political tool. Or, some of its trade partners could invoke trade interdependence to deter any maneouvering on China’s part.

Vulnerability to China’s persuasion could depend on the extent of the trade volume between a country and China.

This can be coercive if a large buyer uses trade as a threat for political concessions, and China has accumulated strategic strengths that it can use as leverage.

Trade has traditionally shaped the ways nations interact; it brought regions together and created rivalries in the quest for resources.

But unlike the mercantilist past, today’s world is much more interdependent, and even China’s rivals are partners in its growth through trade and investment. 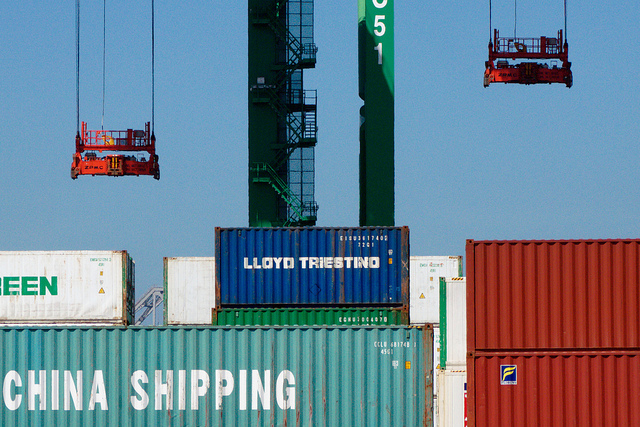 Balance of trade: image by Jed Sullivan on Flickr: https://www.flickr.com/photos/jed-sullivan/8593799586

Trade constitutes almost 50 per cent of the GDP of all countries in the region, barring the least developed countries in South Asia and ASEAN. The high trade proportion to GDP has led to greater economic interdependence with China, although regional political relations are quite naïve.

This has led to a precarious situation for China’s trade partners who have contested claims in the region – a region with a number of territorial disputes and the potential for future military conflicts.

China has also got more aggressive. It started with the rare earth embargo against Japan in 2010 after a territorial incident in East China Sea. Then came the de facto seizure of the Scarborough Shoal from the Philippines in 2012, the 2013 declaration of an Air Defense Identification over an area of the East China Sea, the siege of the Second Thomas Shoal in the Spratlys in early 2014, and the naval skirmishes with Vietnam over Chinese deployment of the Haiyang Shiyou 981 floating oil rig off Vietnam’s central coast.

China’s political interests overlap with its economic interests and vice-versa. For China, economics and strategy are two sides of the same coin, with one side representing diplomacy, to promote exports and investment, and the other an economic tool, from sanctions to trade restrictions, in support of its security goals.

This collision between economics and security poses a strategic challenge in Asia today. The same countries that are trading, investing and growing together are beset by security tensions, with regional nations deeply anxious about Beijing’s long-term strategic intentions.

Compared to trade regions such as EU or North America, Chinese trade relations with Asia are quite high. Japan is its top trade partner, South Korea is the second biggest, while India ranks fourth.

China’s trade with wider East Asia compromises about 31.4 per cent of its global trade. Japan, Korea, India and Vietnam are all significant export markets for Chinese goods.

Though this is a huge market for China, the trade data shows that its share is comparatively low in each individual country in terms of total imports.

But trade restrictions are one way to flex muscles.

China used its dominant position in the rare earth industry to settle the political crisis in the 2010 Senkaku crisis, after tensions rose between China and Japan over the detention of a Chinese fishing crew by Japanese coastguard officials. When China halted the shipment of rare earth metals to Japan it was a clear message to world leaders that a more powerful China might use its economic strength as a weapon.

In addition, the export dependence of Asian countries on China is remarkable. Around 26 per cent of Japan’s total exports and 31 per cent of Korea’s exports go to China, for example.

Many Southeast Asian countries largely depend on China, with close to a quarter of their total trade flowing towards it. The countries with the least bargaining power are overly dependent on it for their exports, while their Chinese imports are relatively weak.

As western hemisphere countries face declining demands for their imports, the importance of emerging countries like India, China and ASEAN will increase significantly, making conflict escalation too costly an affair to afford.

For example, Richard Katz argued that the conflict between China and Japan over the Senkaku did not escalate to war because of ‘mutual assured production.’ China needs to buy Japan’s products as much as Japan needs to sell them.

Trade dependence also means a country may give rivals a wedge in strategic matters.

For example, the Philippines, depends on China for 41 per cent of its total exports, and 27 per cent of imports.

Chinese vessels have been involved in aggressive behaviour near the borders of the Philippines in the South China Sea, and temporarily restricted the import of agricultural products to punish the Philippines over the Scarborough Shoal incidents.

Malaysia was silent over a 2013 Chinese naval expedition in an area just 80 kms away in the South China Sea. China is Malaysia’s largest trade partner.

Continued Chinese assertiveness may become routine, it may again use trade power as a bargaining chip.

In effect, its trade muscle neutralises the soft power capabilities the US or Japan possess in the region. It is a power dynamic to watch.

Nabeel A Mancheri is a JSPS Research Fellow at Institute of Social Science, The University of Tokyo.