The global derivatives market is estimated to be worth more than US$100 trillion. Its principles could be used to support adaption to climate change.

Climate change is undoubtedly occurring, regardless of what we think is causing it. Although carbon mitigation is a potential long-term solution, human society is already adapting to climate change in the short-term through drought, melting ice packs and shifting rainfall patterns.

It’s an urgent issue that doesn’t just come with an environmental cost, but large financial requirements, too, which are often sought from governments, but could also be sourced from the private sector.

The global risk management sector is a potential untapped source of financial capital, and a great amount of discussion has occurred over the role of the (re)insurance industry.

The global derivatives market is another potential source. It is estimated to be in excess of US$100 trillion, which we believe could be used to support parties exposed to climate change in their adaptation efforts by encouraging financial transactions with parties having a different risk exposure, or opinion of future climate outcomes.

Recent climate forecasts and concern about the susceptibility of the Tasmanian salmon aquaculture industry to warming ocean temperatures motivated us to look for solutions to the climate challenges they face. The industry, worth over A$500 million in 2011–12, is considered vulnerable because salmon are currently grown in coastal waters that in some years exceed a thermal limit of about 18 degrees Celsius, with the observed coastal warming in the region expected to continue. 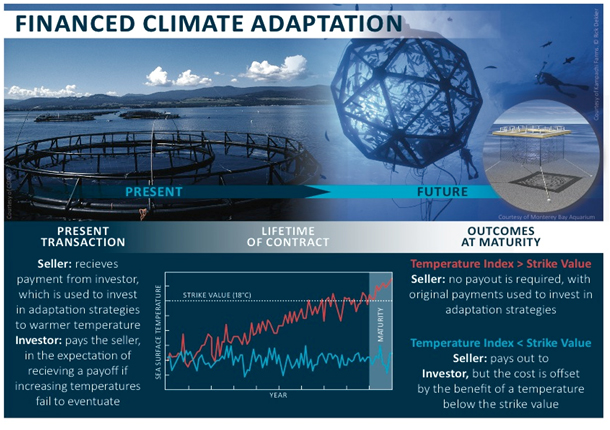 The contract would operate in such a manner that if ocean temperature at maturity remained below 18 degrees Celsius, the contracted aquaculture company would be obliged to make a pay out to the party that purchased the contract.

However, the company would be compensated by the upside benefit of not incurring the risks and costs associated with a higher ocean temperatures. Alternatively, if ocean temperature was to rise above 18 degrees Celsius at maturity, the company would not be obliged to pay out, but instead would have benefited from the investments made to adapt to it.

The price of such a climate derivative calculated from downscaled climate forecasts of average annual sea surface temperature in southeastern Tasmania indicates that a 20-year contract would be valued at around A$50. To raise A$1 million, the company would need to issue about 20,000 contracts. At maturity, if the ocean temperature was below the set temperature, the aquaculture company writing the contract would have to pay out about A$2 million for each degree the temperature deviated below 18 degrees Celsius.

From the perspective of the counterparty or contract owner, climate derivatives offer the opportunity to hedge against potential economic losses, or take advantage of different climate outlooks or risk tolerances.

In our Tasmanian example, possible counterparties would be those who would experience economic losses if warming did not occur, such as viticultural investment in warm-climate wine grapes, which offers significant economic opportunities in Tasmania under a warming climate.

Other possible counterparties include parties who do not expect higher ocean temperatures to eventuate. Such parties would not only expect to benefit from a pay out, but would also have greater expectation of a pay out, and in our example value the contract above A$50, at around A$80. They would therefore perceive an arbitrage opportunity if they could purchase such an investment at A$50, and thus have a strong financial incentive to enter these transactions.

There are other possible uses of derivatives to fund adaptation efforts beyond salmon aquaculture, including tourism, energy generation, agriculture, and infrastructure investment.

The key benefits are that they would provide risk management opportunities against future impacts of climate change; proactively raise capital that can be used to fund adaptation strategies; and generate a quantifiable market-assessed risk indictor for adaptation and planning purposes.

They would also provide a real incentive to parties with different climate outlooks, or risk exposure to take a market assessment of climate change, and either “put up” capital, or “shut up”.

Rich Little is a Senior Research Scientist and Research Group Leader in Fisheries Assessment and Economics in CSIRO Oceans and Atmosphere, based in Hobart, Australia.