A million migrants? There are apps for that

The international governance of refugee migration is not keeping up with global connectivity, writes Marie McAuliffe.

More than one million migrants entered Europe irregularly in 2015, most of them by sea and around half of them Syrian refugees.

Commentators have rightly pointed to significant ‘push’ factors driving migration, such as the Syrian civil war, challenging refugee hosting situations in Turkey, Lebanon and Jordan, and ongoing difficulties people face living in countries with struggling economies and dysfunctional governance. Likewise, ‘pull’ factors have been acknowledged, including the safety and security of destination countries, their strong and stable economies and the more open policies of governments accepting refugees, such as in Germany and until recently Sweden and Denmark.

And yet there has been less focus on the ‘enabling’ factors that act to facilitate movements. Enabling factors are critically important in how they shape migration, and one of the most significant factors is telecommunications technology.

Technological advances have brought about a global transformation in connectivity. Distant lands and virtual realities are now closer than ever. The world is increasingly more accessible, and our global connectivity has profound implications for how people think about and undertake migration.

The world has changed fundamentally in the almost 70 years since the largest refugee crisis in Europe following the aftermath of World War II when the Refugee Convention was being developed. Back then, there was no Internet, there were no mobiles or fax machines, and postal services were slow and often disrupted. Telegram and telephone communication was limited and costly. Paolina Roccanello arrived in Melbourne in April 1947 from Italy with her mother on the SS Misr in the shadow of the war. They were lucky to be reunited with her father who had emigrated to Australia eight years before, expecting his family to follow soon after. For all their war-time separation they received only one of his letters, which had taken five years to reach them. Such were the times.

After World War II refugee movements beyond war-torn Europe were regulated by states (including under the United Nations). The UN coordinated repatriation, returns and resettlement of refugees to third countries. In today’s terms, movements were slow, highly regulated and very selective. Information for refugees was largely the monopoly of states and opportunities for migrating to other regions were limited to formal channels. Things are very different now.

These days conflict and persecution are still occurring at frustrating and tragic levels, but the context has changed. While the international protection system has evolved incrementally over time, it risks lagging further behind. The ‘appification’ of migration has taken off, making migration processes fundamentally different in specific but important ways. 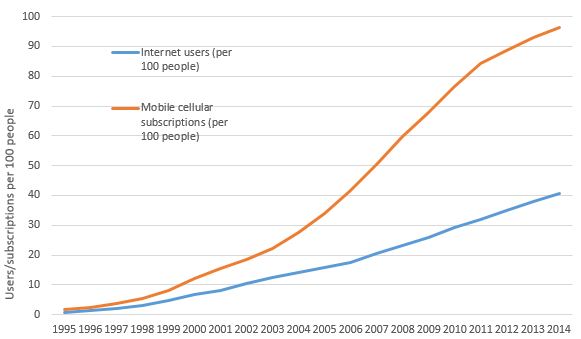 , linking migrants to family, friends, humanitarian organisations and smugglers, but equally linking smugglers to agents, and their networks of fellow smugglers in dispersed locations.

The telecommunications revolution is enabling the creation of unregulated migration pathways that are fast and affordable for an increasing number of people.

There are many apps available for people travelling to and through Europe. For example, InfoAid has been set up by a Hungarian couple to provide real-time advice on how to cross borders. Other apps help refugees integrate, such as Refugermany and Arriving in Berlin. Connectivity is supporting movements to safer regions for many, but pathways are often extremely dangerous and at times deadly. In 2015, the International Organization for Migration estimated that 5,230 people died while attempting to migrate across the Mediterranean Sea.

Secondly, and for the first time in decades, large numbers of refugees and other migrants in transit and host countries such as Turkey are not sitting and waiting for resettlement or return. They are taking matters into their own hands, principally because they can. Information, advice and money can be shared quickly, and the constraints of geography more easily overcome.

The massive and sudden growth in movements through the Eastern Mediterranean route to Greece in 2015 was aided by strong connectivity. In 2014, about 50,000 people arrived by sea to Greece; in 2015, it was around 850,000.

Telecommunications have helped shape the size, composition, speed and geography of the European flows, which primarily comprise Syrians but have increasingly also been Afghans, Pakistanis, Iranians, Iraqis and others. The strong preference for Germany over other European countries is not by chance. It has been realised by migrants themselves as sharing of information increases. In the context of limited access to visas, unregulated asylum pathways risk becoming a funnel for refugees and non-refugees alike. Many of the asylum seekers who travelled to Europe in 2015 will be found not to be refugees.

So what can be done to better regulate movement and ensure more certain, safe and sustainable migration, recognising that turning back the clock on connectivity is both impossible and highly undesirable? Firstly, we need to acknowledge that we inexcusably remain data poor in an age of such great global connectivity. More research harnessing new technologies and undertaken from a migrant perspective needs to be done. Such research could be usefully focused on providing answers to how we might better prevent dangerous illicit migration in safe and sustainable ways.

Secondly, greater emphasis needs to be placed on improving conditions in home countries, including to reduce conflict and persecution but also to improve countries’ economies and governance so that more people are able to forge safe and meaningful lives at home.

Advances in technology are aiding development, but more emphasis needs to be placed on global connectivity to support education and health, income-generation, and human security. While still one of the lowest ranked countries, Afghanistan has seen mobile telephone subscriptions rise from 5 per cent in 2005 to 75 per cent in 2014.  Harnessing this new reach has enormous potential for development and is being pursued by initiatives such as Mobile for Development.

Third, there needs to be much greater accountability of states that fail to meet their obligations to protect their citizens and residents. Technology can assist in bringing abuses to light, such as through EyeWitness to Atrocities, an app to report war crimes. Perhaps the 2015 flows to Europe will provide further incentives for European destination countries and those hosting refugee populations, such as Turkey, Iran and Lebanon, to bring origin countries to account.

Finally, we need to re-think solutions to enhance stability and improve the lives of people who have already been displaced. This would necessarily involve more support to refugee host countries. But just as importantly, deeper thinking about the policy implications of greater mobility is required, as is contemplation of refugees as a potential demographic bonus for highly industrialised countries, rather than a burden.

The technology, resources and intellect to achieve these goals are available. States and international partners that are more determined to see glimpses of the world through the eyes of migrants, and more clearly understand unregulated migration pathways and our inter-connected prosperity, are likely to be at a strategic advantage. They will be able to see emerging issues that can be shaped in positive and constructive ways to the benefit of refugees and states.

The views expressed in this article are those of the author and do not necessarily reflect those of her academic institution, scholarship foundation or employer.