PHOTO: Courtesy of the Commonwealth Government of Australia

PHOTO: Courtesy of the Commonwealth Government of Australia

Are Chan and Sukumaran of the Bali Nine victims of political circumstance?

Have domestic politics in Australia and Indonesia undermined efforts to prevent the Bali Nine executions?

A couple of unfortunately coinciding political developments in Indonesia and in Australia are greatly affecting the fates of Andrew Chan and Myuran Sukumaran of the Bali Nine.

These developments have nothing to do whatsoever with the legal aspects of their cases but show how politics and not strictly formal considerations will decide whether these men can escape the firing squad at Indonesia’s Nusakambangan prison island.

On the one hand, we have Joko ‘Jokowi’ Widodo’s presidency, which has been shaken by the eruption of open warfare between Indonesia’s corruption-ridden police force and the celebrated but now besieged Corruption Eradication Commission (KPK). Jokowi’s is a fragile government, circumscribed by the fact that the President has no control over any political party, and that those supporting him in parliament are outnumbered by an internally fractious but surprisingly resilient coalition cobbled together by his former opponent, Prabowo Subianto.

The Indonesian Democratic Party for Struggle (PDIP), the main party behind Jokowi, is actually run by political matriarch Megawati Soekarnoputri – who attempted to force him to appoint a loyalist, Budi Gunawan, as head of the national police. Days after his nomination he was declared a suspect in a corruption case investigated by the KPK.

On the other hand, we have the astonishingly inept leadership of Prime Minister Tony Abbott in Australia. Once an opposition leader who adroitly took advantage of the former Labor government’s multitude of failings, he appears to have more recently specialised in shooting himself in the foot. So aggrieved by his performance is his own Liberal Party that it recently nearly dumped him. It is clear that Abbott is far from being out of the woods as far as his own party colleagues – and it seems, the Australian electorate – are concerned. 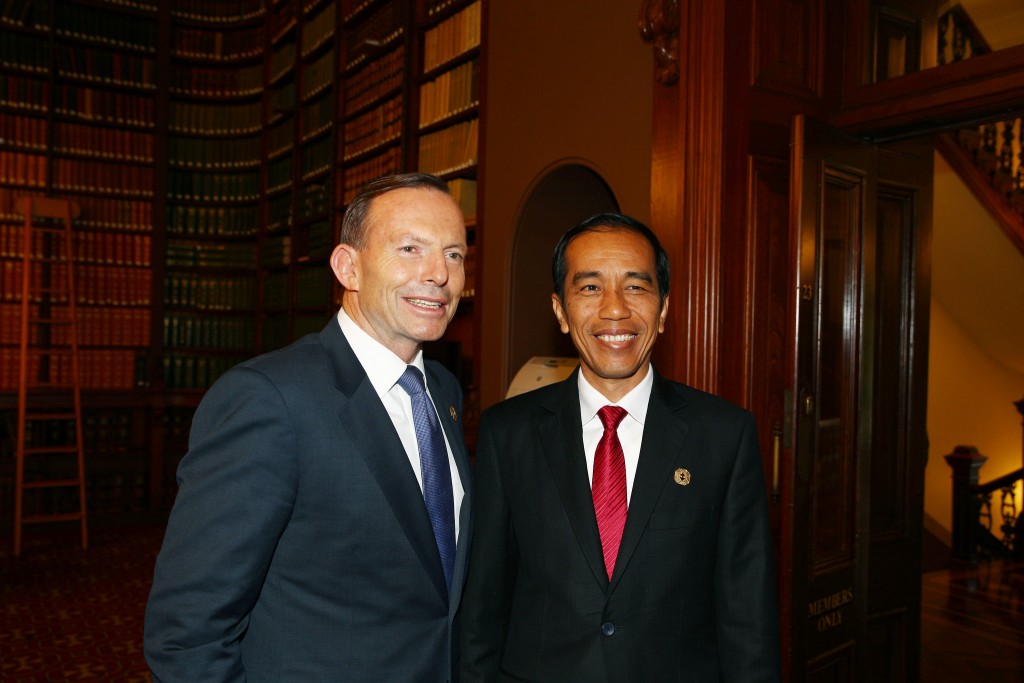 PHOTO: Courtesy of the Commonwealth Government of Australia.

So how do national leaders beleaguered by such political crises try to get some measure of temporary relief? Evidently some will turn to the arena of foreign policy to direct attention away from domestic foibles, even if their actions may have undesirable outcomes. In this case, such a penchant has resulted in the aggravation of the Australian-Indonesian relationship, which has been already severely tested in recent times.

For Jokowi, made to look so feeble and indecisive by his own allies, staying true to a declared ‘war on drugs’ has now become a foreign policy issue, and more significantly, a matter of showing mettle as a national leader. He is obviously keen to avoid being seen as a weakling president who ‘caves in’ to Australian ‘demands’. Reinforcing his resolve is widespread unhappiness within Indonesia with the not-yet-forgotten telephone tapping case of the SBY period and Australia’s ‘turn back the boats’ policy, which apparently involved reckless transgressions on Indonesian waters. Given this, it is little wonder that the President has categorically rejected Chan and Sukumaran’s plea for clemency put forward by their lawyers.

Jokowi’s stand-off with Australia isn’t the only foreign policy fire front he’s battling at the moment. The recent execution of a Brazilian national – and plans to execute another – have strained relations between the two countries to the point where Brazil refused to accept the credentials of Indonesia’s new ambassador.

Abbott, too, has made an attempt to show strong leadership in the foreign policy arena soon after his domestic political weaknesses were exposed for all to see. However, in yet another bout of carelessness, he opted to remind the Indonesian people how much they owe Australia for assistance received in the aftermath of the devastating Indian Ocean tsunami of 2004, which particularly caused havoc in the troubled province of Aceh. Rather than a demonstration of diplomacy, it backfired into a social media campaign that saw the poor residents of Aceh scrape together their coins to ‘repay’ Australia’s generosity under the hashtag #CoinforAustralia.

Foreign Minister Julie Bishop has been left to try to salvage the situation through intense, behind the scenes diplomatic attempts to change Jokowi’s mind. These were so nearly aborted by her PM’s lack of acumen.

But the problem actually runs deeper than Indonesian offense at a perceived case of bullying by a wealthier neighbour.

Imposing the death penalty for drug smuggling may be inhumane; indeed it may be so for any crime. Nevertheless, Indonesians are also keenly aware of the irony of an Australian government making appeals to fairness and compassion when it has exhibited so little of either in relation to the refugees it has consigned to limbo and misery on Manus Island.

Over the last decade successive Australian governments have whittled away any legitimacy they may have had in talking the language of human rights. Surely the Indonesian government’s attempts to save its own citizens from the gallows in other countries for drug related infringements also smacks of hypocrisy. But then again, few would expect Indonesia to abide by standards as exacting as they would Australia in matters of human rights, even if Australia’s own history on these has not always been so illustrious.

From this point of view, Chan and Sukumaran – not withstanding the undoubted recklessness of their actions more than a decade ago – have become victims of a set of political circumstances they have no control over and that have nothing to do with their crimes. Domestic political developments have conspired to compel the leaders of both Indonesia and Australia to act ‘strongly’ in ways that exacerbate already existing tensions between the two countries, and therefore, have had detrimental effects on the two men’s efforts to avoid execution.

They are also victims of the fact that Australia has lost much of its regional and global status as a beacon of humane values of compassion and fairness. At the same time, Indonesia continues to show that renewed focus on such values does not always come together with democratisation.