You’re travelling in Bangalore, moving two inches every two minutes. With nothing else to do but marvel at the serpentine traffic, you look out. Hiranandani Developers are wooing you to buy a condo with a ballerina capering in a pristine meadow. The cottony clouds and brilliantly blue sky, white butterflies and yellow buttercups converge into an overbearing Yash Raj moment. The model is Caucasian, the meadow obviously Photoshopped. The advertisement looks like a Hallmark card, fuzzy around the edges, a faint glow emanating from the girl’s face, eerily perfect and grotesquely blatant in its eagerness to distance itself from the reality of urban India. A voice from the radio is rattling off how homes with Italian marble can buy you happiness. And they come cheap at a mere 2 crore rupees (~US$0.3 million)! How can you not find that attractive?

Walking through Bangalore, one is bombarded by dozens of advertisements selling the dream of owning a house.

Some coax you to finally realise your dream of owning a ‘home’ while others appeal to your sense of identity. Some promise you exclusivity, oases and urban forests, while others belittle you for not dreaming big enough.

In this frenzied rush to woo your senses and empty your pockets, these ads lead the potential buyer into a space where no slums exist, where unpaved roads and erratic electricity are forgotten, and dry lakebeds and scraggly trees are ignored. In this ideological oasis, you can be ‘in the city as well as out of it’; you can, with one stroke of real estate fantasy, choose to ignore inequality and pollution, ‘elevate’ yourself above the homeless other. The city is sanitised of its ugliness: one click and the grey skies are inked blue, crop the photo and the slums are rendered invisible.

India’s real estate business is undergoing what is now a familiar cycle: years of heady escalation followed by a downward spiral replete with unsold apartments and rising construction costs. The city as an urban system is unspooling: signals of this include regular instances of flooding, lakes that froth or catch fire, inadequate public service delivery in city peripheries, and a dysfunctional waste management system. All symptoms of larger planning failures, budget allocation gaps and local apathy, these are only serving to drive home the realisation that the urban dream is not all that it is sold to be. 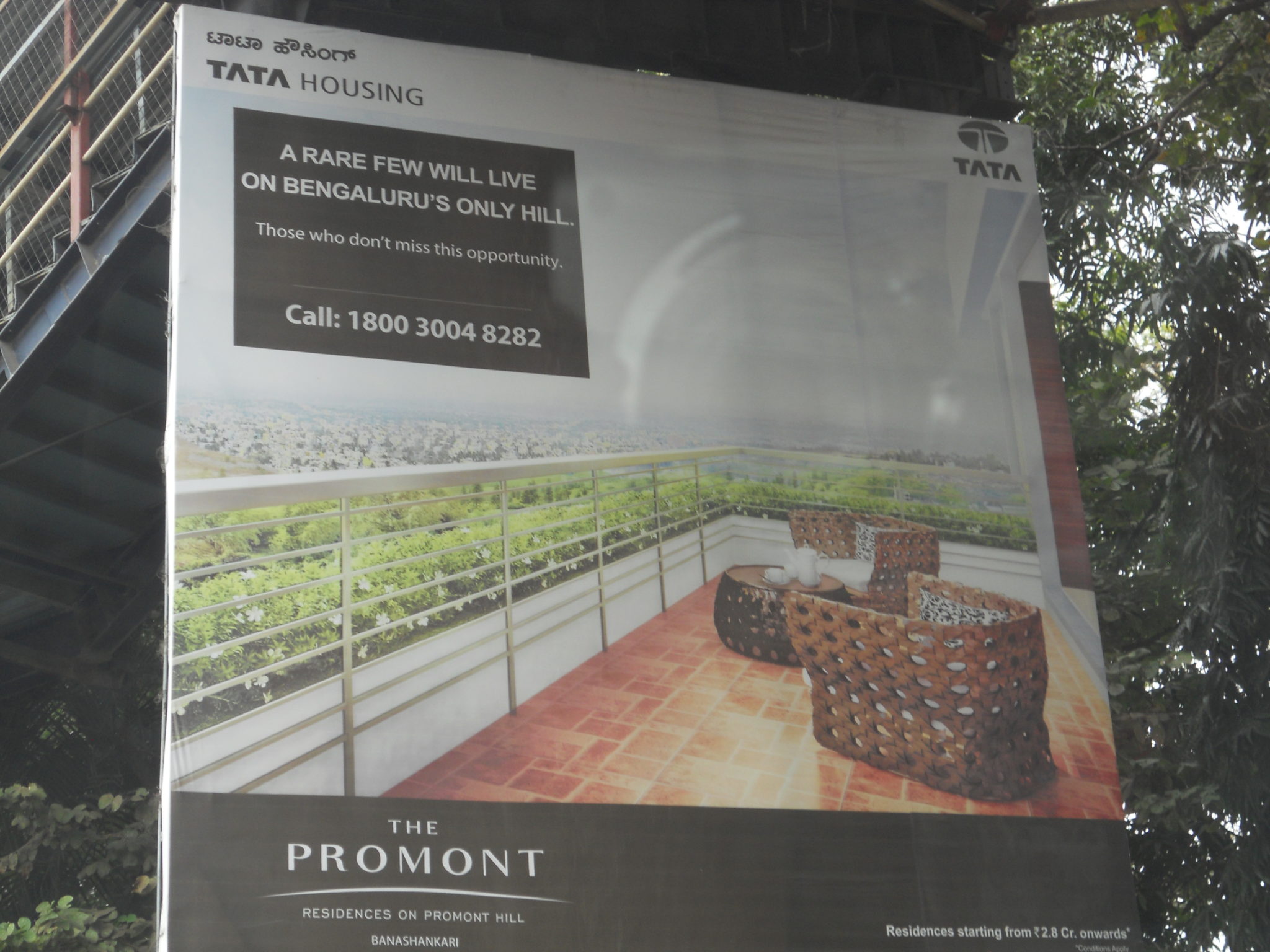 Promising exclusivity: Living on a hill or ‘If you are high enough, we promise you won’t see the slums’. 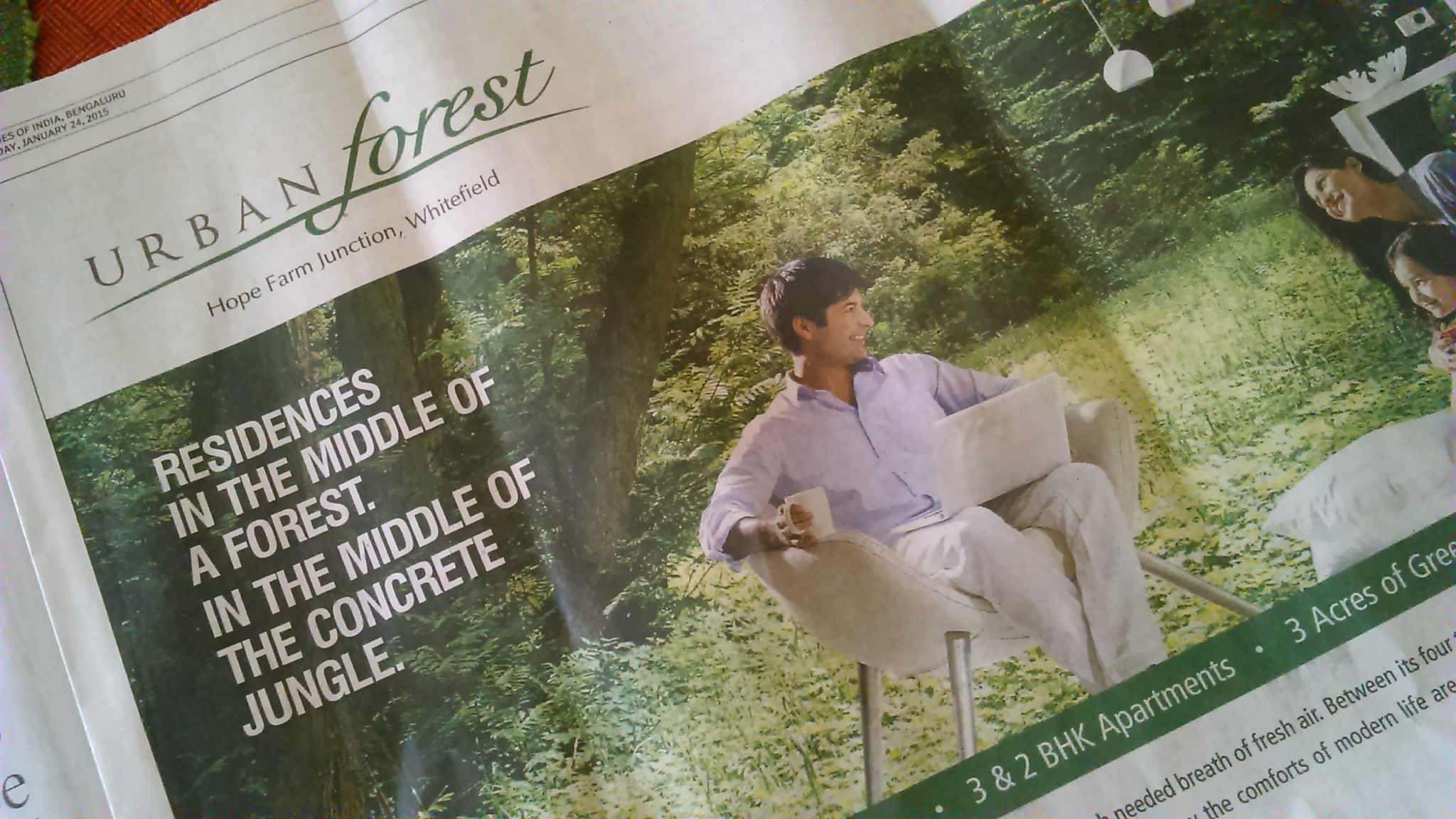 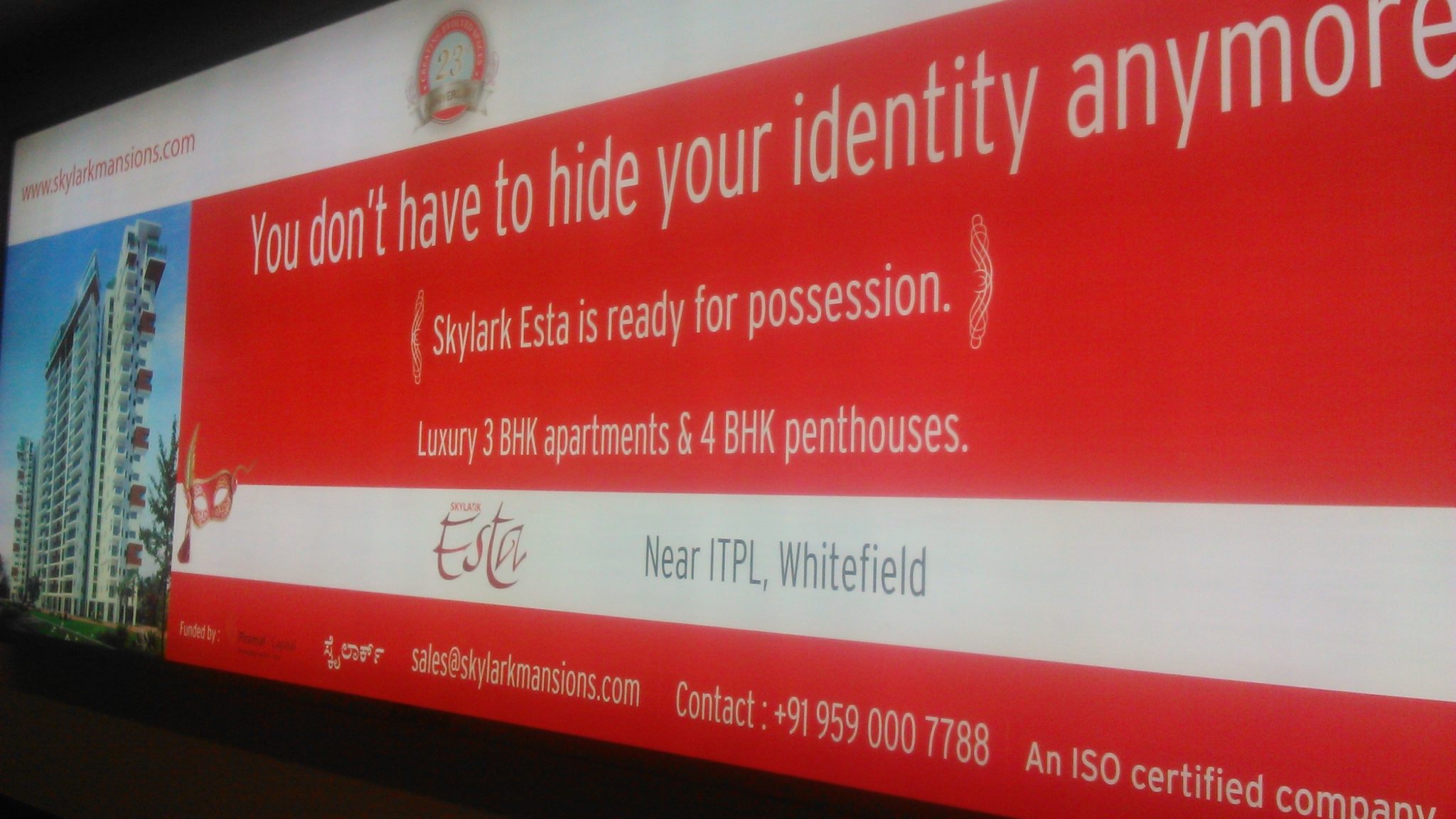 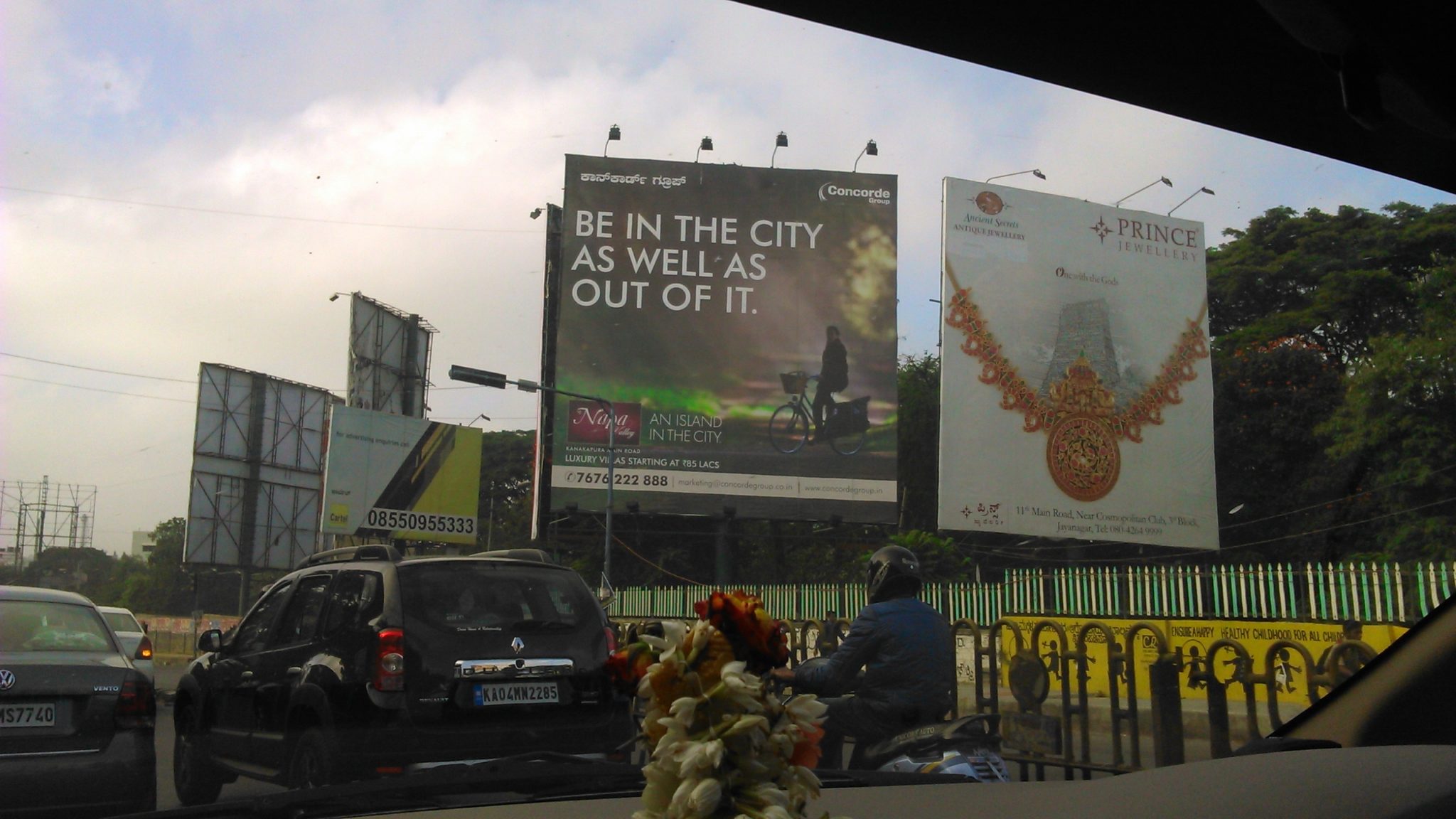 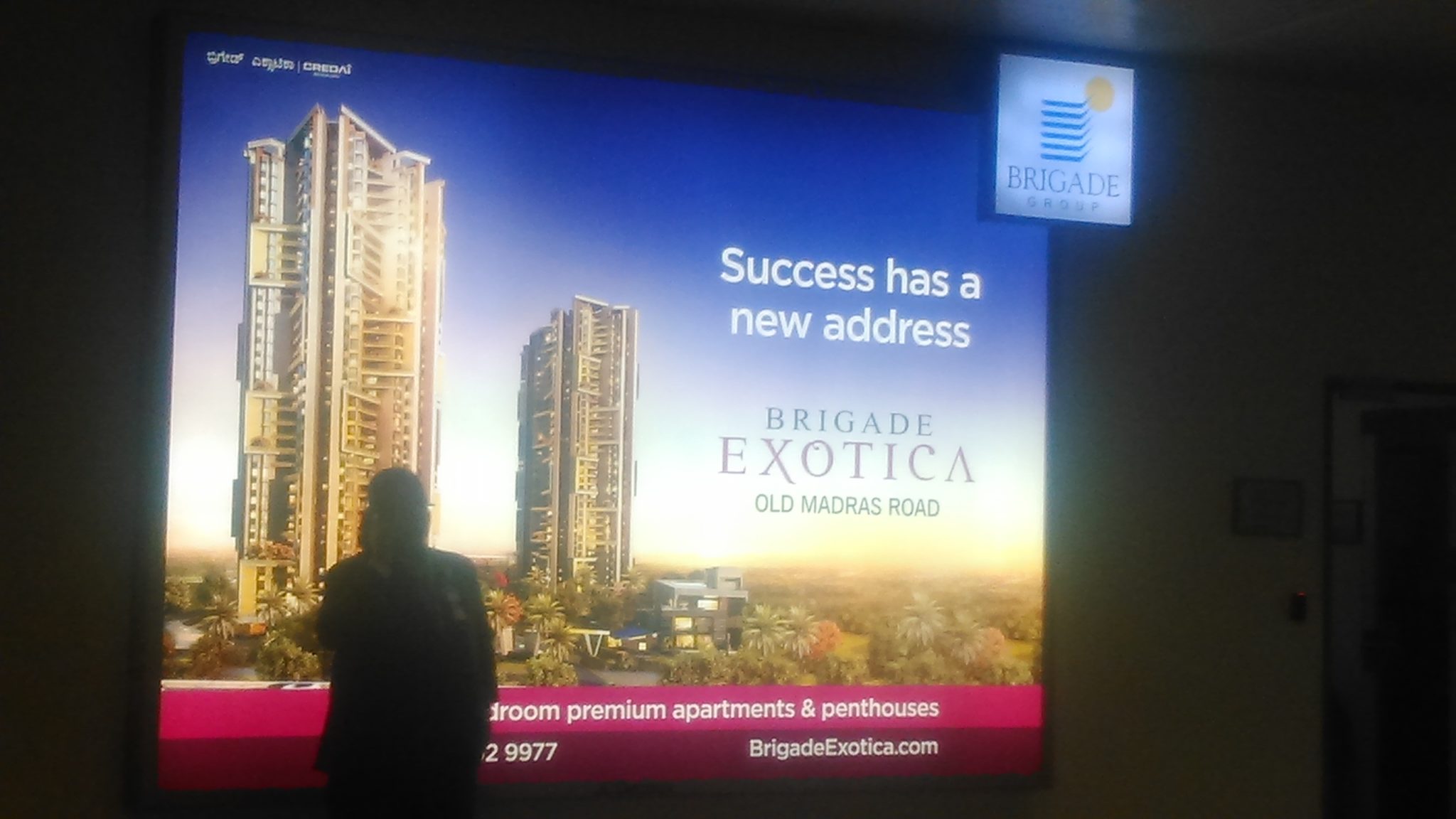 Is ‘success’ is defined by where you live? 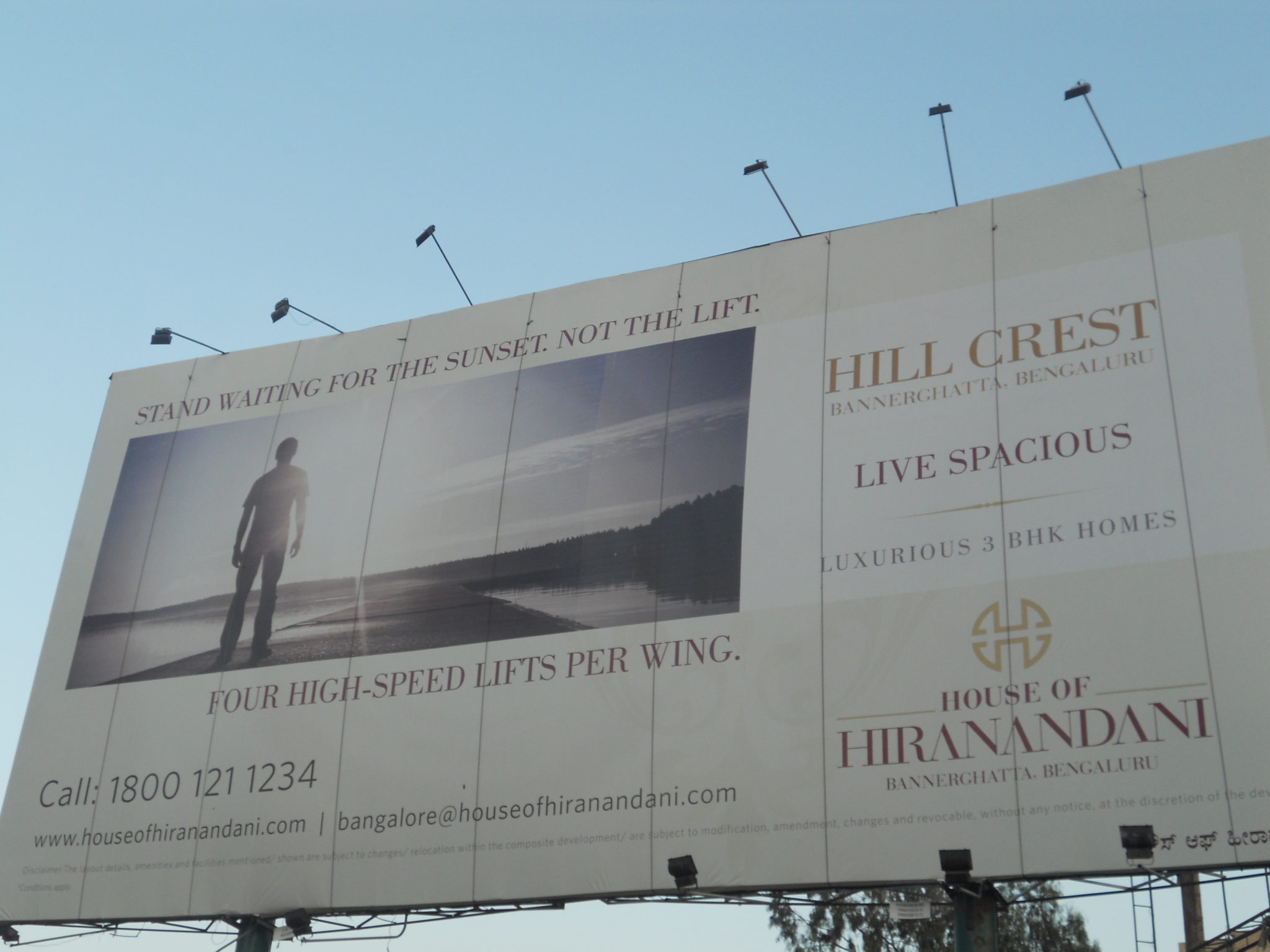 The wonderful promise of beachfront houses. In a land-locked city. 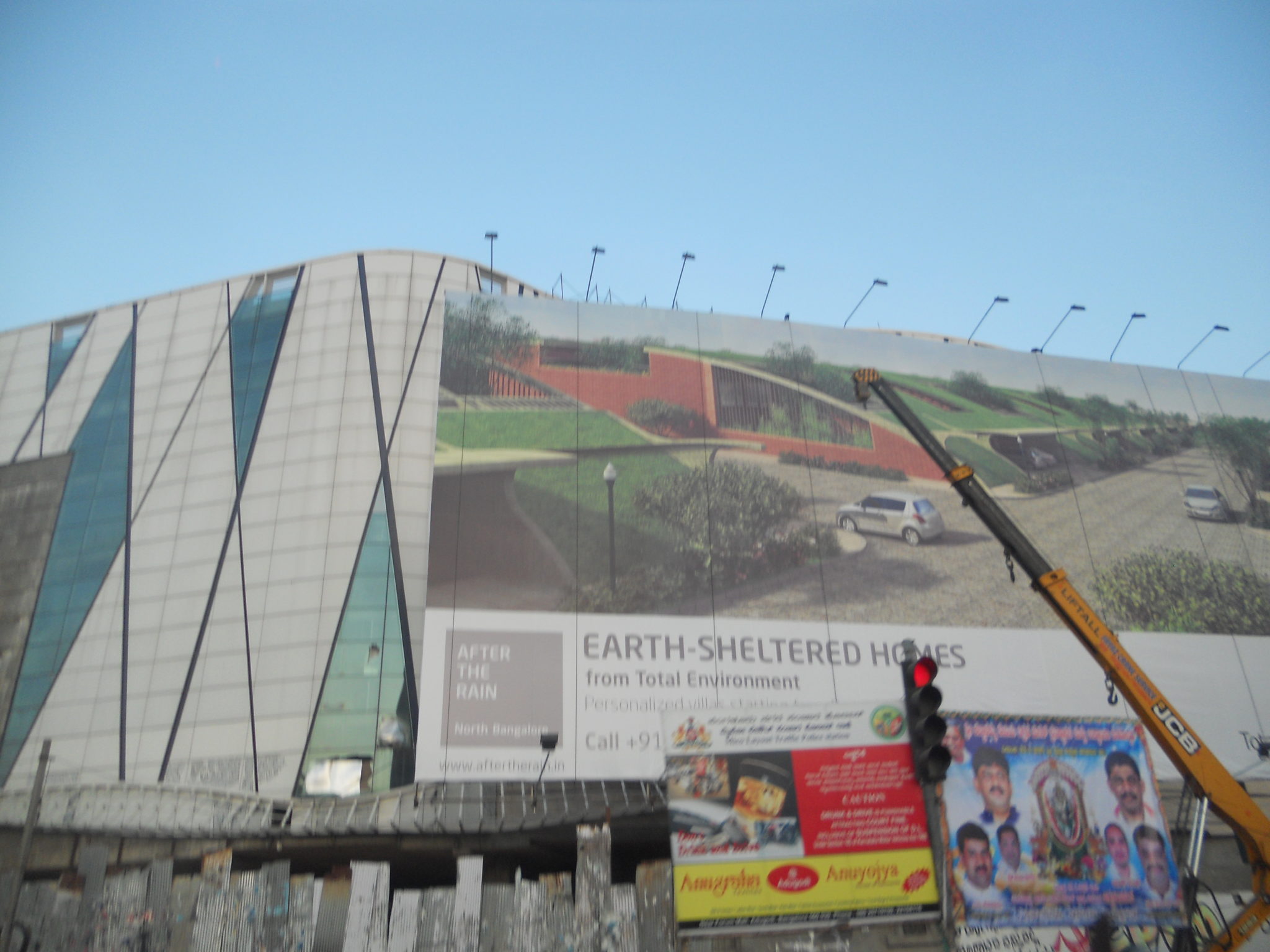 At the other end of the real estate spectrum is the paucity of investment in affordable housing, especially for the poorest. Researchers have argued that this is inadequately addressed in the Government’s Housing for All policy. Although migrants make up approximately 15 per cent of Bangalore’s population (Census, 2001) many of them tend to live in unenviable conditions in poorly serviced peri-urban settlements and engage in informal, low-paying, and often temporary employment. These disparities in lifestyle at the two ends of the spectrum echo Jean Drèze and Amartya Sen’s description of India as a mosaic of ‘islands of California’ amidst a ‘sea of sub-Saharan Africa’.

But changes are afoot. Concerted citizen action in Kaikondranahalli Lake has revived it from being a garbage dumping site to one where birds nest regularly. People are coming together to improve waste management in apartment buildings and to demand better public infrastructure and services. IT-based solutions in waste management and service delivery are underway. But a lot more needs to be done.

In a future that is increasingly looking urban, we need to collectively reimagine the role of the city in our lives as a mediator of and vehicle that shapes our identity, aspirations, and wellbeing, as well as our role in the city as concerned individuals, as active participants of communities of change, and as stewards of a currently precarious social-ecological system.

The opinions expressed in this article are the author’s own and are written in a personal capacity. They do not reflect the views of IIHS in any way. All photographs have been taken by Chandni Singh.