Partners in peril in the South China Sea

Strategy and partnership between the Philippines and Japan

On April 4, 2016, two Japanese destroyers and a submarine docked in Subic Bay in the Philippines for a three-day goodwill visit, just one consequence of the recently-announced Strengthened Strategic Partnership between Japan and the Philippines. The two countries expect to derive strategic benefits from this but, as with any diplomatic endeavor, there are possible perils for the region and the two partners.

For the Philippines, its enhanced partnership with Japan fulfills many of its foreign policy goals and its strategic objectives in the South China Sea.

First, it promises to enhance the Philippines’ strategic position vis-à-vis China. In March this year the Philippines became the first Southeast Asian country to sign an agreement with Japan on the transfer of defence equipment and technology. Last year, Japan announced it would provide the Philippines with 10 high-speed patrol vessels to enhance the country’s domain awareness over the “West Philippine Sea.” Even if China had not changed its charm offensive into an armed offensive, this archipelagic country would have had to improve its coast guard, naval and air force capabilities as its 36,000-km coastline is the sixth longest in the world. The country has committed to upgrade the navy’s capabilities and Japan’s soft loans for defence equipment will help boost these efforts.

Second, the Japan-Philippines agreements could potentially wean the Philippines off its historic dependence on the United States. Since 1946, the US was solely responsible for patrolling the Philippines’ maritime area, while the government tried to battle internal instability.

Philippine President Benigno Aquino III vowed to modernise the military so that it can undertake territorial defence and maritime. Part of the plan is to diversify sources of defence equipment and build relationships with other Asia-Pacific actors, such as Australia and Japan, that might be able to help the Philippines should more contingencies arise in the South China Sea.

This could deter China from denying access to maritime routes and islands, and from intimidating the Philippines. Japan has one of the region’s most technologically-advanced military – one which can stand up to China’s naval capability. Moreover, Japan has removed, or at least softened legal barriers, to defending itself by effectively reinterpreting Article 9 of its constitution with the 2015 Legislation for Peace and Security (LPS). This law allows Japan to respond to an “infringement” even if the other party’s action does not amount to an armed attack; moreover, Japan can defend itself when ‘an armed attack is made against a foreign country that is in a “close relationship” with Japan.’

It is not farfetched to infer that a “strengthened strategic partnership” falls under this purview.

Should Chinese ships attack Japanese ships responding to Philippine ships in distress, the next hope is that the US will come to the aid of Japan. But the US has been vague about what it considers to be the “metropolitan territory” of the Philippines and has publicly declared that it does not take sides in the South China Sea dispute. The best hope for US involvement is for Japanese ships to act as ‘tripwire’.

This is not impossible. From the late 1990s, various iterations of the Japan-US Mutual Defense Guidelines have slowly widened the Self-Defense Force’s “area of operations.” And although the Japan-US Security Treaty states that any action in response to a “common danger” will be in accordance with their respective “constitutional provisions and processes,” some analysts believe that the US is more likely to come to Japan’s aid than to the Philippines’.

Japan’s 2014 security legislation gives it some autonomy to deal with security threats in its immediate area, and in securing sea lanes from the Persian Gulf to the Gulf of Aden and then through the Straits of Malacca to the South China Sea. The Malacca Straits is a strategic chokepoint – 25 per cent of world trade passes through, and 80 per cent of Japan’s imported oil from the Middle East. Whoever blocks those areas could strangle regional and international trade as well as limit Japan’s energy supplies.

Under its new National Security Strategy, Japan will build a “comprehensive defense architecture to firmly defend Japan” and it will cooperate with other countries to maintain and develop “Open and Stable Seas” based on the “rule of law,” including “freedom and safety of navigation and overflight.” Japan’s strategic partnership with the Philippines helps realise some of these goals. Port calls and joint exercises will guarantee access for Japan’s ships and aircraft. 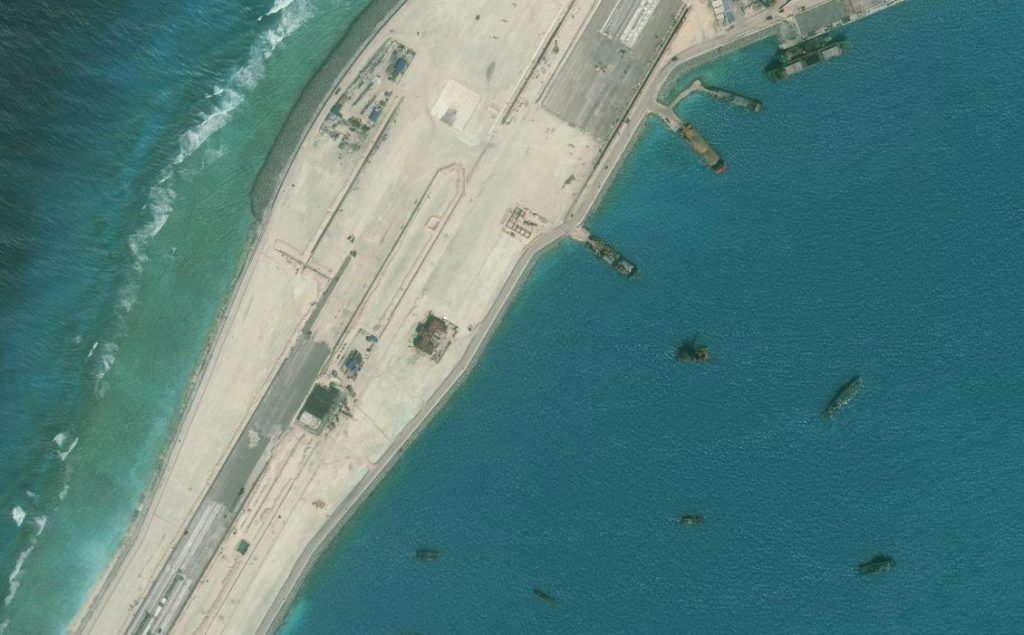 More important is the Permanent Court of Arbitration’s decision in October 2015 that it has jurisdiction over the Philippines’ case, and that the Philippines and China are bound by UNCLOS provisions on dispute settlement. If the Court finds that China’s nine-dash line is contrary to UNCLOS, then Japan would already be strategically positioned to protect international sea lanes.

By cooperating with other US allies, Japan also demonstrates that it is a credible partner, or even surrogate, for the US in the Asia-Pacific. Helping develop the capabilities of Southeast Asian states could prove less taxing on America’s dime, and it could help ensure that Southeast Asian countries remain under the US ambit.

Finally, Japan’s partnership with the Philippines legitimises its return to “normal status” and demonstrates that Japan is less of a security concern than China.

However, the Philippines-Japan strategic partnership will complicate the dynamics in the South China Sea. The agreement will mean the spread of defence equipment and technology, and the entry of a formidable power into the fray. Can the potential pitfalls and perils diminish the positive impacts of this partnership?

Japan’s provision of 10 vessels is still far short of what the Philippines needs to achieve “credible minimum deterrence.” The Center for New American Security estimates it would need several corvettes and frigates, at least 4-6 midget submarines, and several F-16 fighters, to effectively patrol its maritime area. These are beyond the plans and the budget of the Philippines.

The Strategic Partnership will not necessarily lessen Philippine dependence on the US. Japan is also tied to the US and follows its agenda, and Japanese aid or assistance will most probably be tied to US policies. It is also possible that the Philippines might be trading one dependence for another as some experts argue that this partnership gives an opportunity for the Japanese defence industry to internationalise.

Japan’s show of force and its conclusion of more agreements with Southeast Asian countries probably won’t compel China to temper its aggression in the South China Sea. It is likely to spur China to construct more artificial islands and beef up its presence in the area.

When the visit of the Japanese vessels was announced, the Chinese government stated that it would maintain its forces on high alert. That does not sound like a country backing down. There is also the pending decision of the PCA. There is still a chance that the Court might declare China’s nine-dash lines and historic claims as contrary to UNCLOS provisions. By strengthening its presence, China will be presenting a fait accompli so that it would not matter if the nine-dash lines are deemed against international law.

The threat of action won’t necessarily bring China to the negotiating table to at least discuss a reasonable code of conduct; perhaps this will only happen if it actually loses in a maritime encounter with Japan. China has already told its domestic audience that it would not give in to external pressure. How will the discussions over a code of conduct play out in a country that has been spurred into nationalist fervor over the nine-dash lines?

The same caution can be given to the Philippines and Japan. Nationalism is playing such a strong role in the South China Sea and East Sea disputes that the leaders have to be very careful about committing themselves to a course of action from which they cannot back out.

Japan’s presence and possible response will also be closely monitored by South Korea. While both countries are within the ambit of the US alliance system, South Korea continues to be wary of Japan’s growing military and the expanding scope of its operations. Would the US be willing to keep South Korea in line? It is currently juggling several foreign policy challenges and much will depend on the outcome of the US elections in November.

This brings us to the idea of Japan acting as a tripwire for US involvement. Will the US actually risk its relations with China to come to Japan’s aid? The US president will still have to consult with Congress, which has lately shown a preference to deal with ISIS/ISIL rather than help countries in Asia. In addition, the US not only has strong economic linkages with China but also relies on China to be a partner in other diplomatic endeavors to deal with North Korea and Iran.

But if the US does become involved, Southeast Asian countries will have to do something that they have been dreading – choose sides between China and the US. There is still a lack of consensus among ASEAN nations on this issue; and past ASEAN meetings have shown that China was able to exert such a strong influence on Cambodia, that it was willing to break consensus in order to follow China’s wishes in preventing the South China Sea issue being discussed in its own proceedings. Thus, US actions might actually jeopardise whatever minimal consensus currently exists in ASEAN.

Nothing is ever simple when it comes to dealing with the South China Sea. It has always been necessary to have a multilateral forum or solution because the area is important not only for the littoral states that depend on it for resources, but also for other states that depend on international maritime trade. The way things stand, such a constructive discussion or resolution will not occur. The Philippines-Japan strategic partnership may perhaps be to blame, but these countries are reacting to China’s intimidation tactics, aggression and blatant flaunting of international rules. While those reactions may not necessarily bode well for the region, they are, regrettably, understandable and possibly inevitable.