The art of R&D courtship

Government and governance, Trade and industry, Science and technology | Australia

Australia’s innovation policy is struggling to get past first-date nerves. It needs to focus on building long-term relationships or risk getting stuck in the research and development friendzone, Amanda-Jane George, Julie-Anne Tarr, and Alexandra McEwan write.

There’s no doubt about it. When it comes to innovation metrics, Australia lags behind counterparts like the United Kingdom, particularly in terms of university-industry collaboration (UIC) for research and development (R&D).

One oft-cited statistic is that Australia’s UIC involving small to medium enterprises (SMEs) ranks last out of 28 countries on the 2017 OECD Science, Technology and Industry Scoreboard. By contrast, the UK ranked first.

Even in the midst of Brexit woes, the UK has kept its top 10 position for UICs on the Global Innovation Index for five years. Australia’s ranking for UICs, on the other hand, slipped from 14 to 32. (Click to see chart) 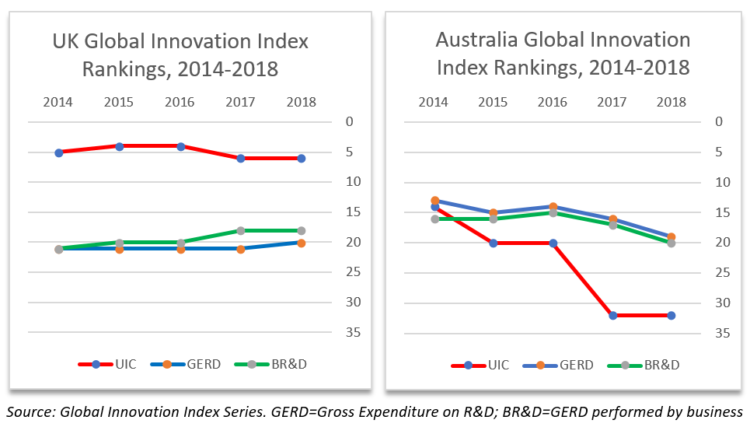 Some might quibble with the numbers, but it seems Australia’s collaboration levels have not improved despite the Turnbull Government’s drive for collaboration through its National Innovation and Science Agenda. Why aren’t we seeing an uptick in the kind of dense, interdependent, reciprocal connections needed for good R&D collaboration?

Let’s use the old-fashioned romantic analogy of courtship to explore why Australia’s R&D approach may be missing the mark.

In the traditional sense, courting refers to the process that partners go through to build trust and share values and experience that indicate the other party’s suitability for a long-term relationship. The emphasis on trust-building and commitment distinguishes it from casual, short-term dating. We need to court and then propose to our prospective research partners.

Early reports like McGauchie (2004) recognised that relationships, contracts and the thorny legal issue of intellectual property are an unholy trilogy for collaboration partners. Indeed, a 2008 Australian study found a surprising 36 per cent – more than one-in-three potential collaborators – walked away from projects due to legal and contracting difficulties that damaged the relationship.

Nestled among the measures for the National Innovation and Science Agenda is a curious initiative aimed at minimising relational difficulties and cutting the contract red tape for collaboration partners: a free, online, template contract Intellectual Property Toolkit. Curious, because it seems a little like drafting a prenuptial agreement (‘prenup’) before the parties have had their first date. It puts the contractual cart before the relational horse.

The Toolkit was quietly rolled out in December 2017, after a lacklustre response from the few stakeholders that responded to consultations. IP Pragmatics, a respected consultancy that reviewed the UK Government’s template contract initiative, did submit a response. It urged that a template contract ‘tick-box’ approach (prenup) was not appropriate in complex relationships (courtship) like UICs.

This is unsurprising. There is a vast social science literature on the dynamics of relation and trust in business partnering. Back in the 1960s, Macaulay noted that contract parties behave differently where relationships are important. By the 1980s, both economists (Williamson, 1980) and lawyers (Macneil, 1980) agreed that different types of transactions benefit from different approaches to contract structuring and governance.

Macneil suggested there is a continuum. At the ‘transactional’ end, template contracts are ideal for simple, certain, one-shot deals. Neither party needs to invest in relationship building. Everyone quickly gets what they want and heads home: Wham bam thank you Sir or Ma’am.

At the opposite ‘relational’ end, we have complex, uncertain, repetitive, or potentially long-term partnership arrangements – like many R&D ‘courtships’. Here, template contracts are not effective. The art of building relationships, give and take, building trust, and knowledge sharing comes to the fore.

UIC stakeholders in many past reports have described the relational problem, but have only recently started to see relationships along a continuum as Macneil proposed. The 2017 Howard Partners Report (itself prepared for the Australia 2030 Report) noted that stakeholders felt:

… business-university relationships must move from a ‘transactional’ basis to a longer-term partnership basis. There is a particular challenge for SMEs in engaging on a long-term basis.

Supporting innovation in an age of disruption

However, the Report went on to state that ‘there has been major progress made over the last five years’. This is not consistent with innovation metrics, nor some of the stakeholder comments in consultations. Australia risks continued loss of R&D collaborations if we don’t squarely address relational issues. We cannot stick with the usual policy suspects of incentives (e.g. cash injections) and nudges (e.g. engagement and impact reporting). There are only so many times a suitor can offer roses or hopefully mumble, “wanna meet the folks?”

There is a growing interest in the role for contracts in collaborative innovation. One 2018 study suggests a relational approach is key but notes the ‘extreme’ difficulty of implementation.

A good place to start may be by applying relational contract theory. One of its key insights is that all exchange is influenced by, and intertwined with, the broader relationship between the parties. Where long-term, uncertain or complex relationships are contemplated, relational issues must be addressed first; pedantic contract drafting or enforcement is minimised.

Indeed, the Australian Navy has had significant success with relational contracting, winning an international award in 2016 for transforming its previously transactional, highly antagonistic collaborations to efficient teams with aligned values and missions.

The relational contracting approach may be usefully expanded to encompass the political dimension, with implications for policy direction.

There is a clear need for research aimed at improving our understanding of the role of relationship building in R&D collaboration before the Australian Government’s next review in 2022. We particularly need SMEs to share their own experiences and perceptions across what is all too often an ‘achy breaky’ dating landscape. For the sake of Australia’s economy, policymakers need to do a far better job of playing cupid into the future.

Dr Amanda-Jane George is Senior Lecturer in Law and Discipline Lead in Research at the CQUniversity School of Business and Law, Australia.

Julie-Anne Tarr is Professor of Commercial Law at the Queensland University of Technology School of Business, and serves on numerous Boards for startups and health care management in the biosciences.

Dr Alexandra McEwan is a Lecturer in Law at CQUniversity, Australia.