The secretive state has announced ambitious plans to increase tourism – but will it work, and what awaits visitors?

North Korea may not be the first place you think of for a holiday, but for those who have had the experience it’s a place like no other. Michael Ruffles writes about a recent trip and shares his photo gallery.

A trip to North Korea 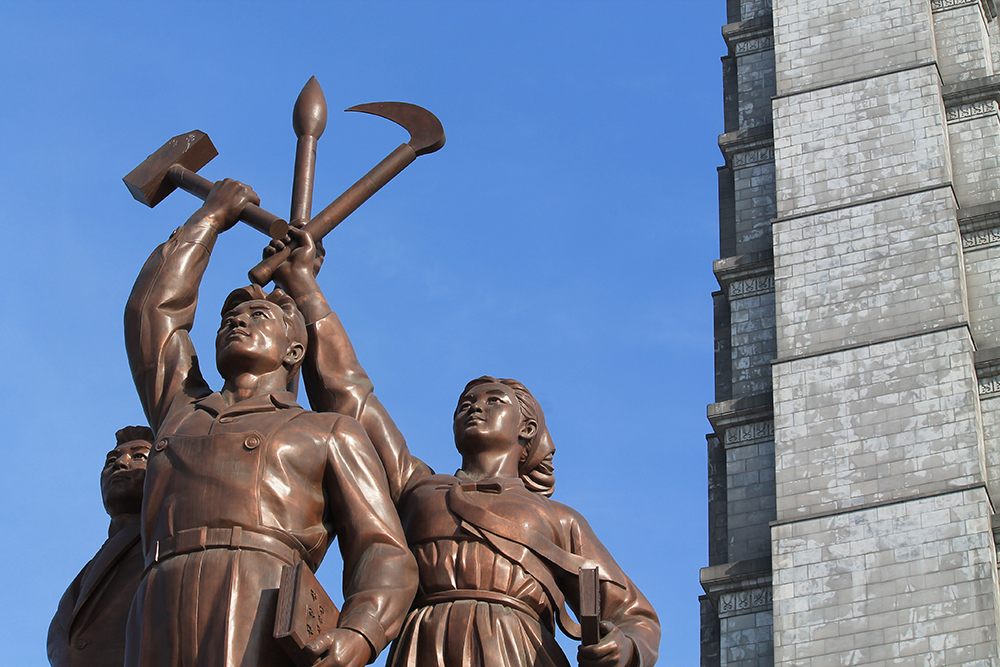 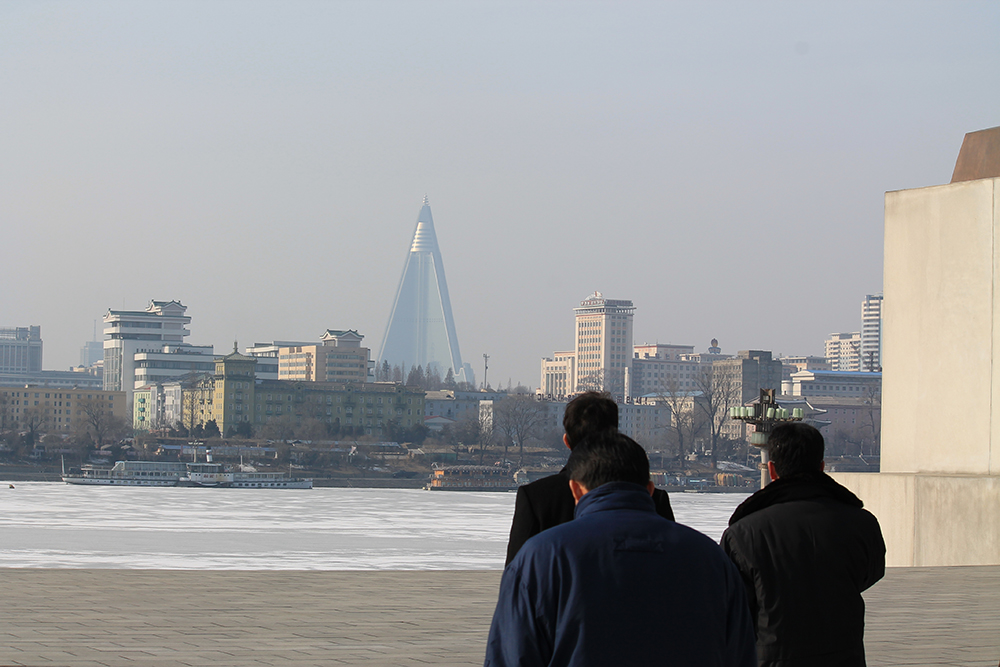 Many tourists see North Korea from one of the foreign ministry’s blue tourist buses. We were a group of three on a longer than usual 10-day package, and there was one government minder for each of us. Two belonged to the foreign ministry, had travelled overseas and were fairly comfortable with Westerners. The third did not say so explicitly but appeared to answer to a more secretive branch of the government, and the university he said he graduated from is known to have produced spies. 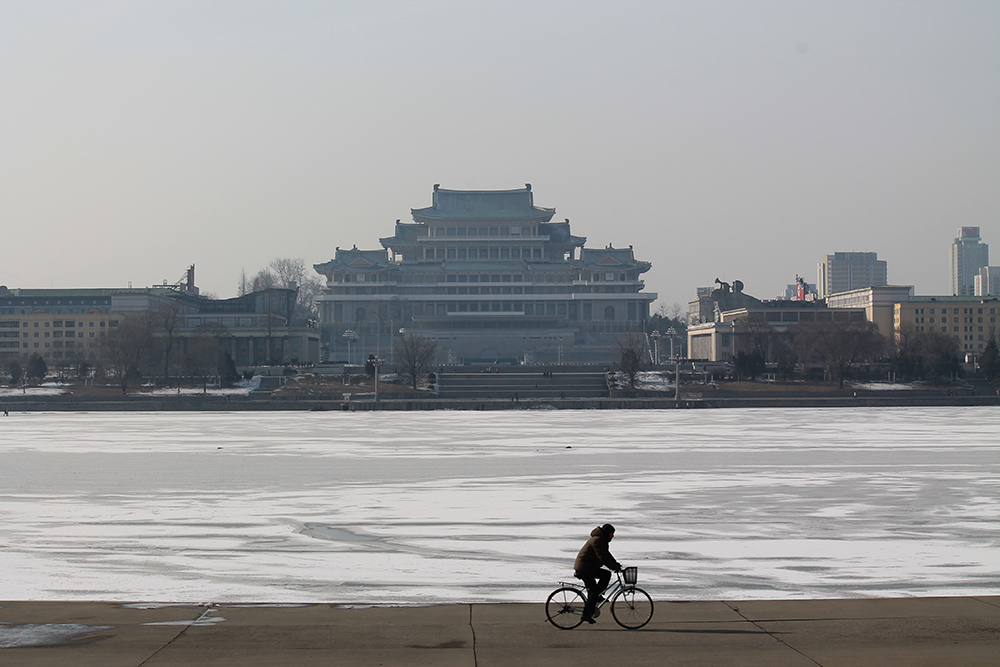 Visiting in February meant activities that celebrated the birth of Kim Jong-il, but also meant freezing conditions. Some days only warmed up to 0C. The Taedong River was frozen over in the heart of the capital and it was safe to walk over. While we were not allowed to cross it, our friendly government agents did bend the rules enough to let us stand on the river. Pyongyang features wide streets and sweeping promenades in front of monuments, and this view from in front of the Juche Tower looks across at Kim Il-sung Square, where parades are often held, and the Grand People’s Study House, where much of the reading material is written by or about the country’s leaders. 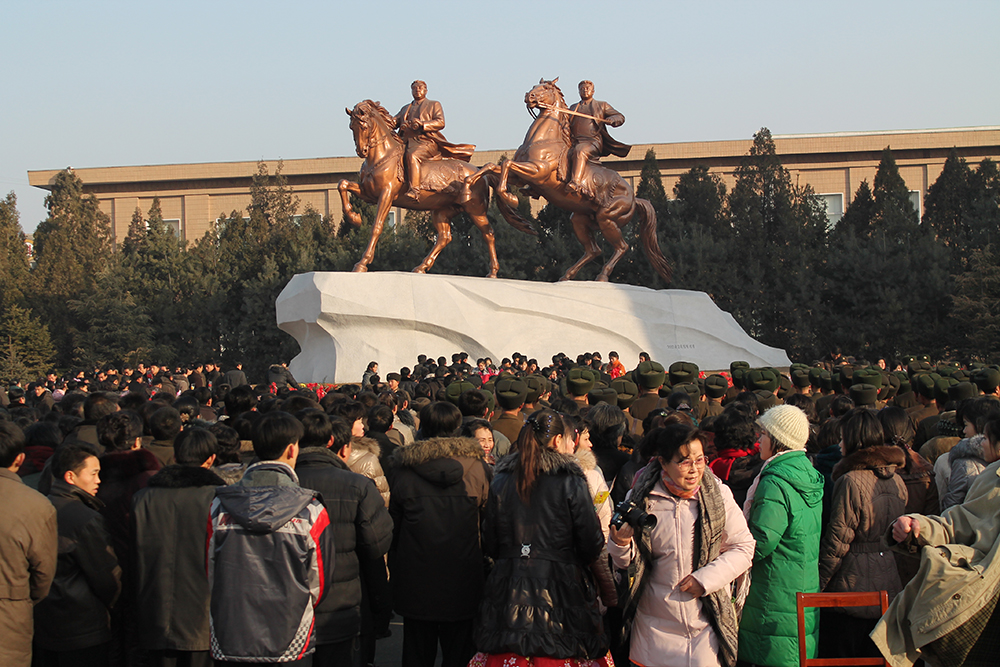 A key part of any trip to North Korea is paying respect to a statue of Kim Il-sung and Kim Jong-il. In many cases, it will be the first item on the itinerary. Before 2011 there were no statues of Kim Jong-il, with the second in the dynasty striving to preserve the cult of his father. After his death, this statue of father and son on horseback was quickly erected, unveiled on the day he would have turned 60, and several others soon followed suit. 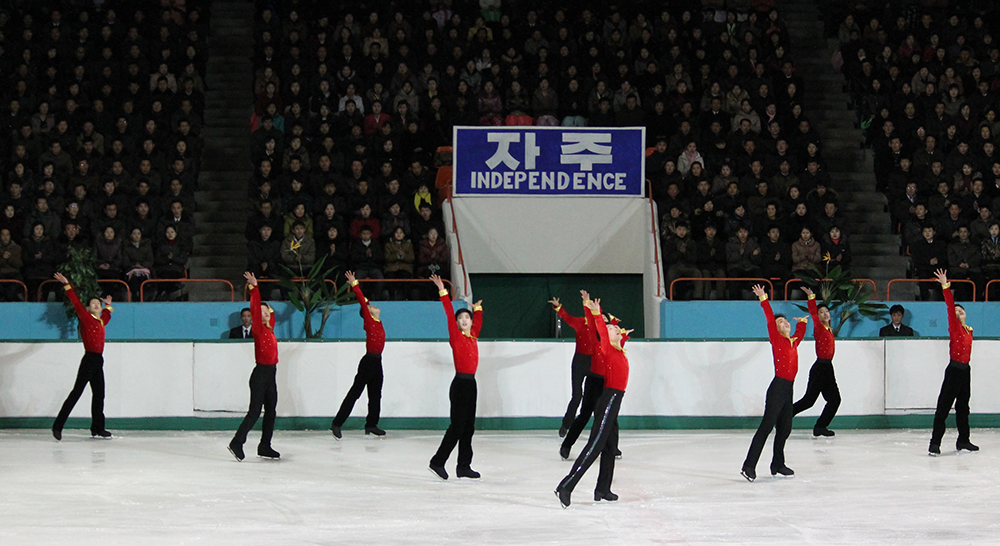 The weather did not allow for the hypnotising mass games which typically take place in April, but we were privy instead to the opening ceremony of an international ice-skating competition. The experience was fascinating, as one European couple broke out a few dancefloor moves to a Western pop song, only for the Koreans to end the ceremony with swelling Soviet music and the crowd clapping along with military precision. 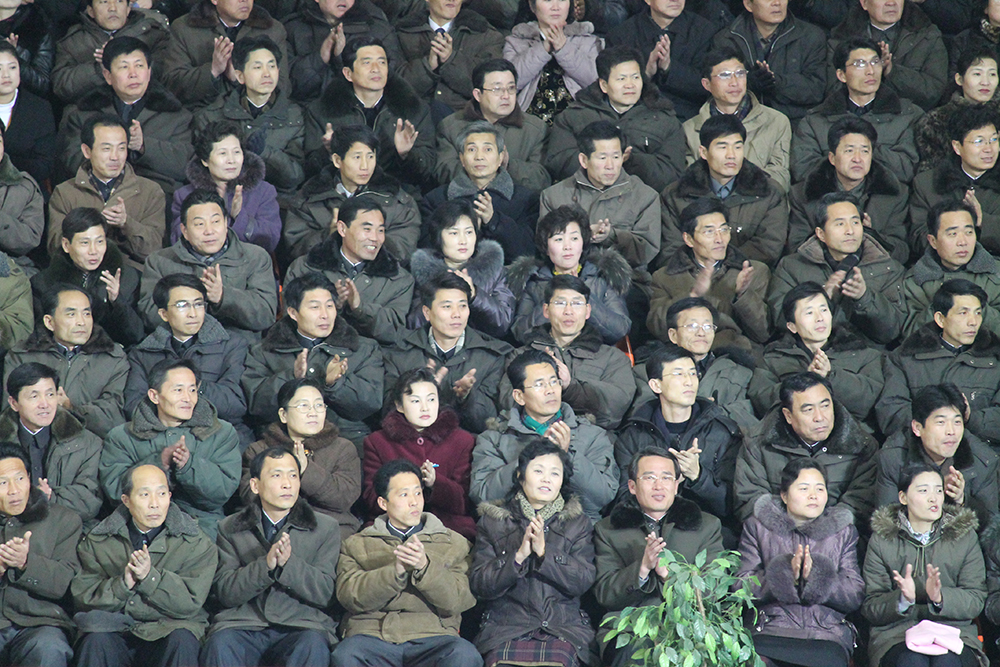 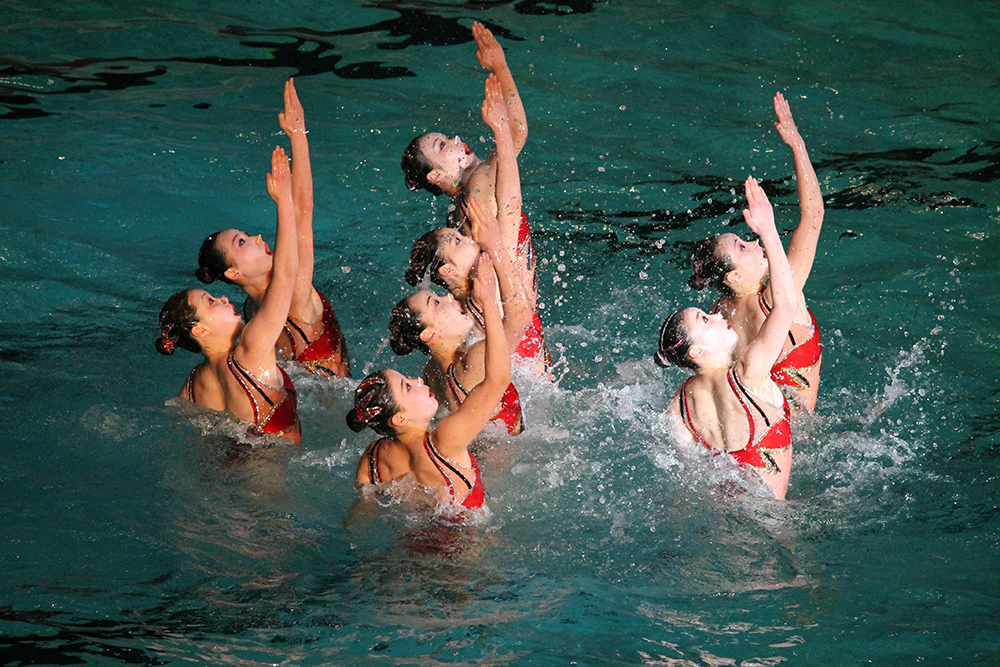 The synchronised swimming event later that evening was even more boldly nationalistic, although that could perhaps have been partly explained by the presence of a senior minister in the audience. Each of the routines on the program told part of the official North Korean folklore surrounding the Kim dynasty: from Kim Jong-il’s alleged birth in a cabin on Mt Paektu, to his brave leadership against imperialist aggressors, to the children swimming in circles to symbolise how the North Korean people’s will continue for generation after generation. 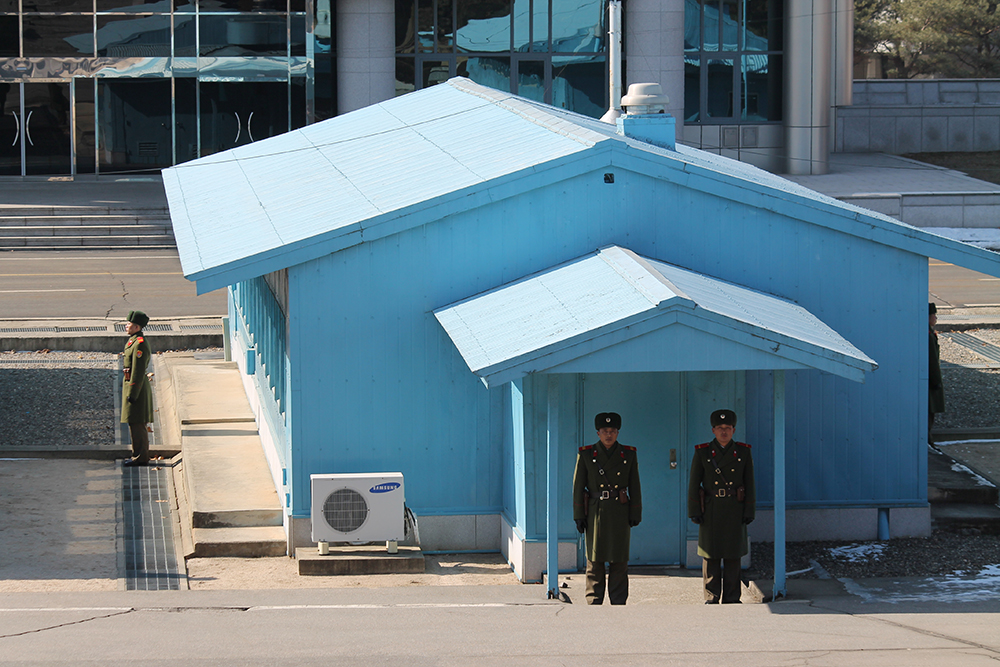 A trip to Panmunjom and the Joint Security Area of the Demilitarised Zone is a must from the north, as it is from the south. It is there, after passing several checkpoints and being escorted by a personal military guard as well as a government one, the split between the two countries becomes most clear. The men in green tell you war could break out at any time, and they are prepared for it, and it seems so senseless. There are seven buildings where talks can take place, the four blue huts are the most famous and the one tourists visit. When inside, you can cross over the border line but must leave the way you came. Everything is split down the middle, even the microphones are lined up across the middle of the room, and we are told both sides can hear us talking. Panmunjom, further to the north, stands as a museum to the 1953 armistice. 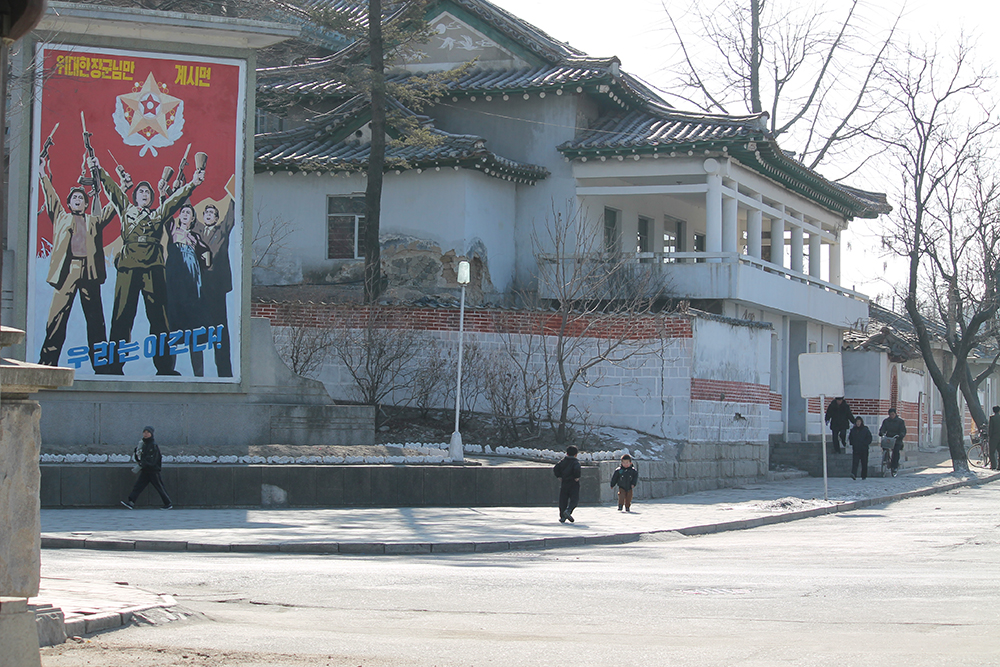 Kaesong is the closest city to the border, and site of several tourist attractions. It was also here we had the chance to walk around the streets and catch at least a glimpse of what life is like for average North Koreans. 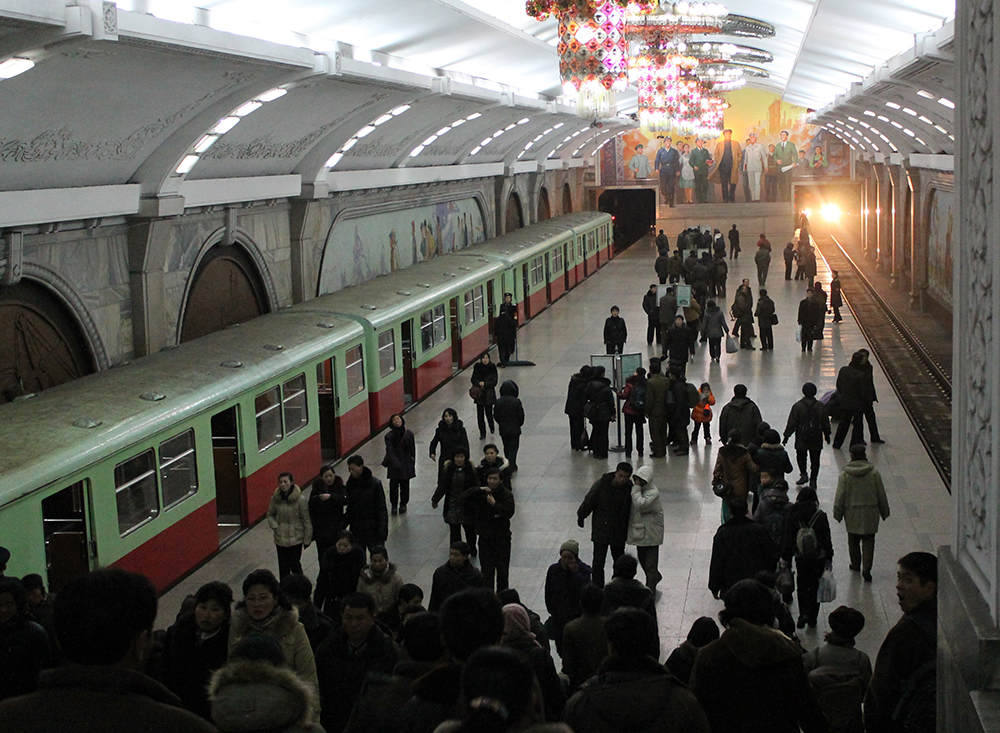 The Pyongyang Metro is a famous attraction, partly because of the ornate decorations in the two stations tourists are permitted to see. The stations are both gorgeous and garish: colourful chandeliers, marble everywhere and Soviet realist murals of Kim Il-sung walking among the peasants. The stations also double as bomb shelters as they are about 100m below ground. 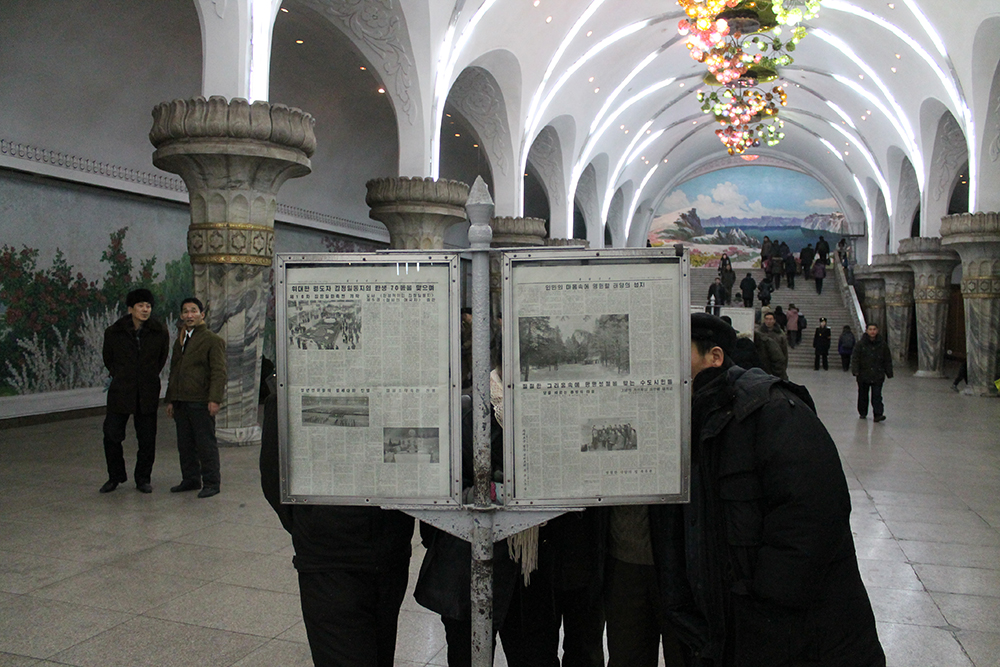 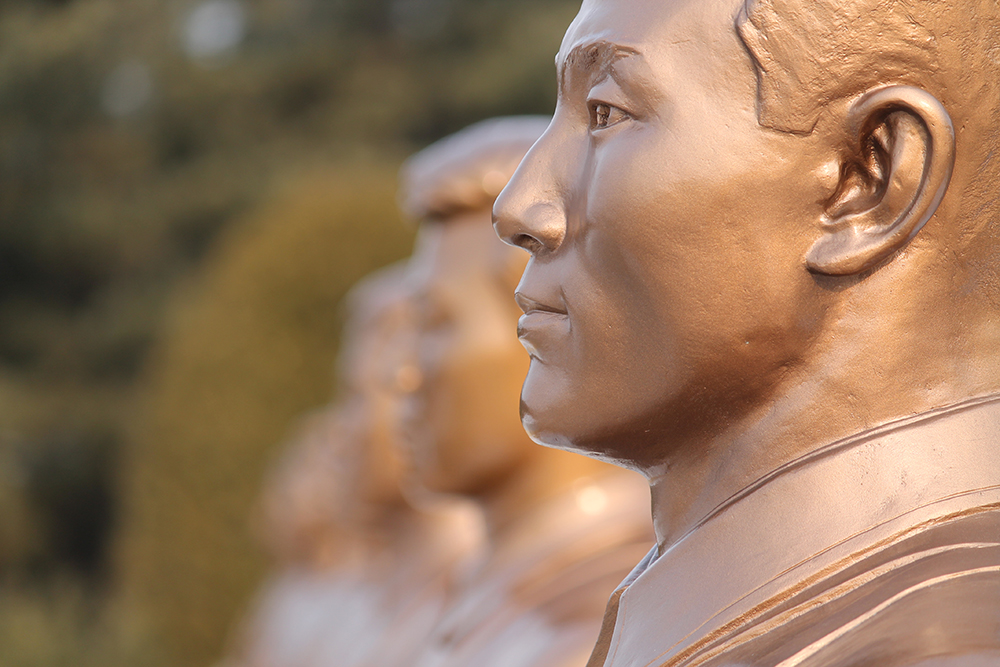 Kim Jong-il excelled at building monuments, although he had the decency to build them for his father, the Korean Workers Party or major anniversaries rather than himself. The Revolutionary Martyrs Cemetery looks down over Pyongyang from a mountain, the Reunification Monument – a statue to nothing more than an idea for now – passes over the highway heading straight to Seoul, and the Juche Tower stands as an obelisk in the centre of the city that is pointedly ever so slightly taller than the Washington Monument. 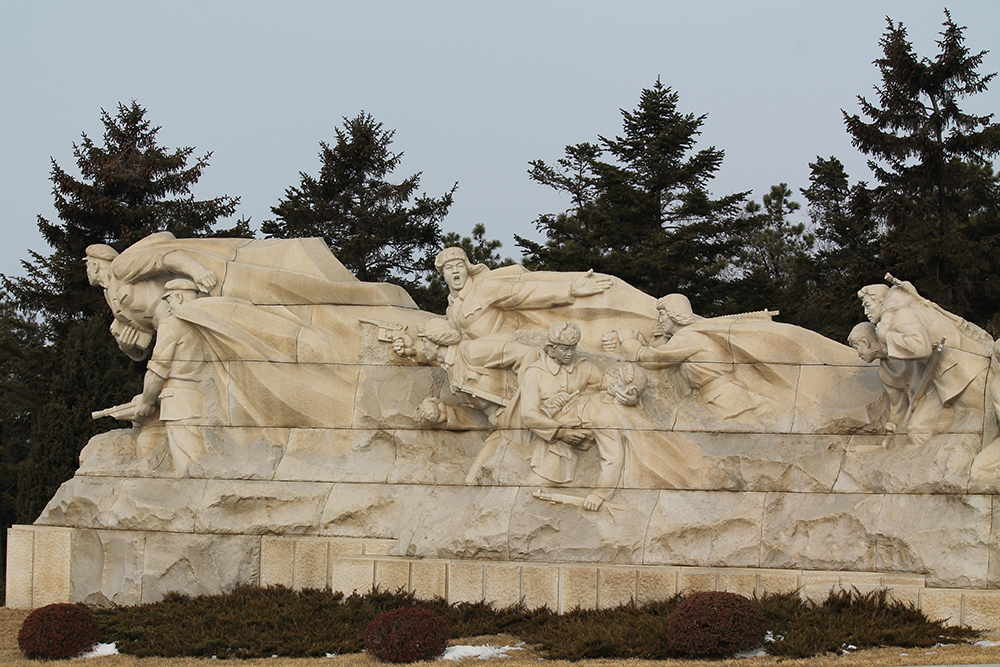 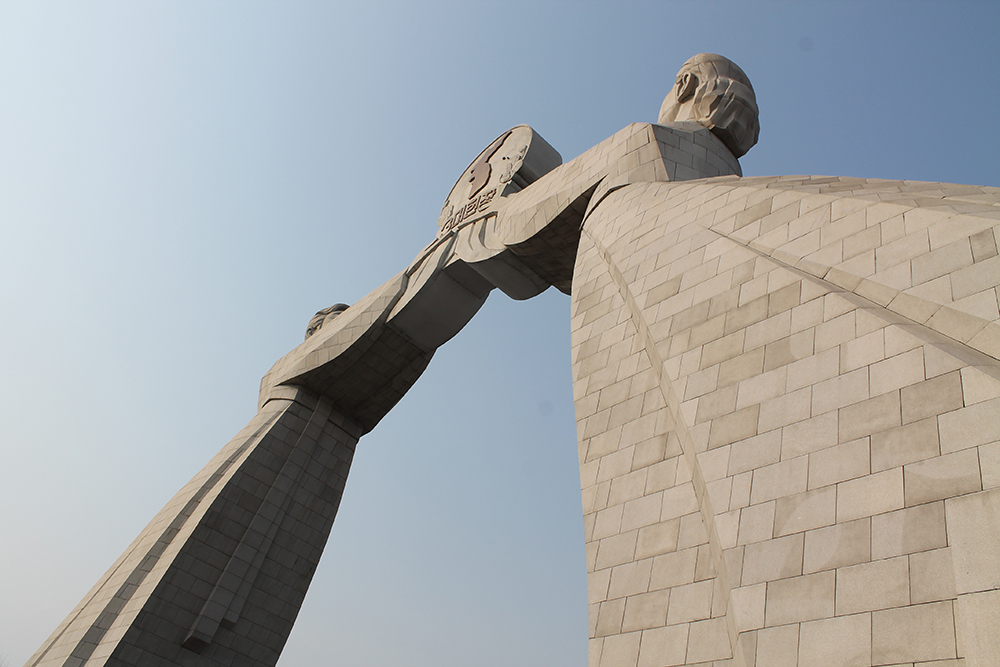 A group of children is led past Kim Il-sung Square in the early evening. A picture of the Great Leader dominates the square, and his image is ubiquitous across the country. 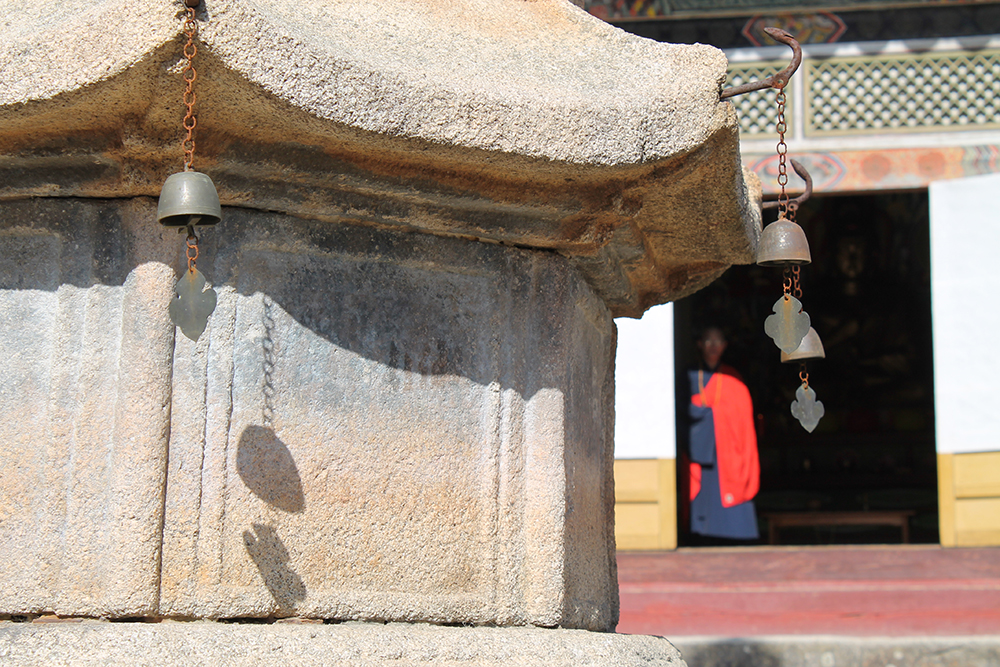 The Pohyon Temple in the country’s centre dates back centuries and received funding from the regime to rebuild after it suffered significant damage during the Korean war. Officials were at pains to use the Buddhist temple as an example of religious tolerance, even though the regime’s record on that score is a bad one. 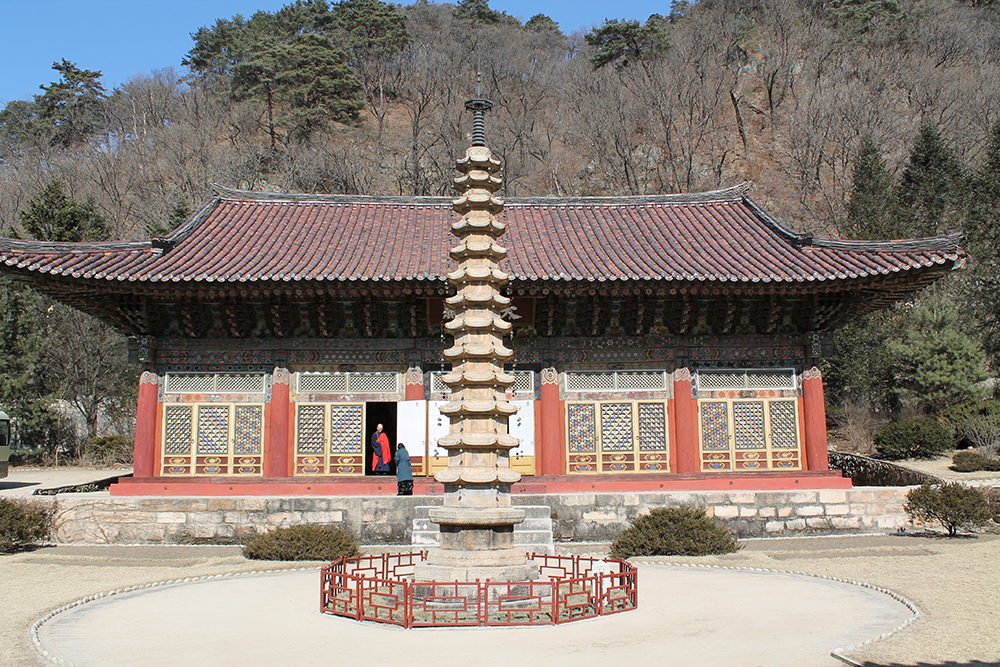 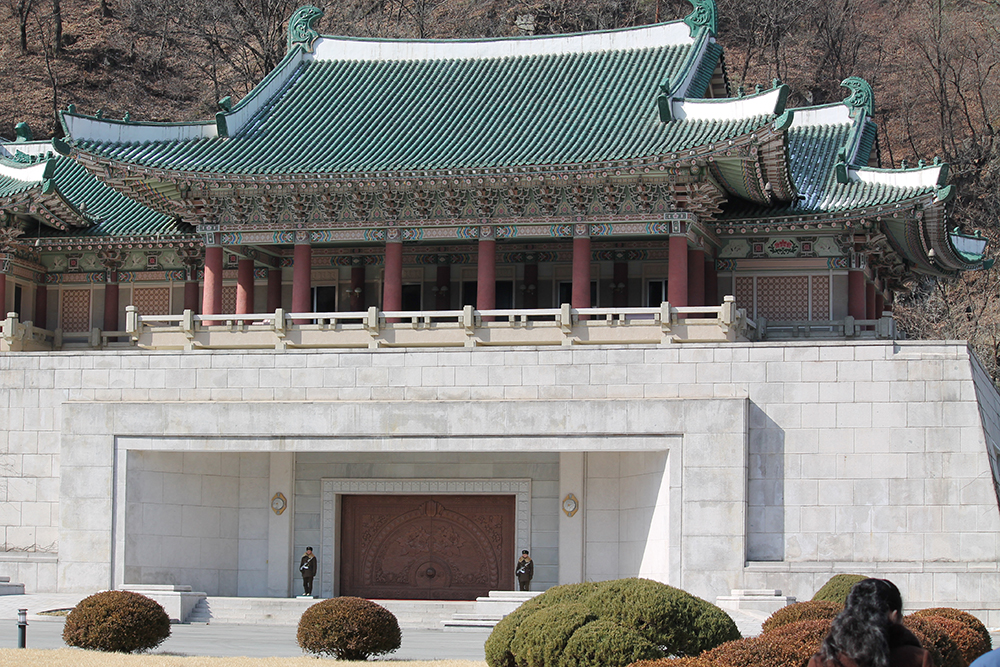 Both Kim Il-sung and Kim Jong-il have received plenty of gifts from international dignitaries, dictators and ordinary citizens alike. These are all kept in museums in the mountains: they are literally buried in massive galleries beyond and below these doors. Unfortunately the guards armed with shiny AK-47s do not permit photography inside, so you have to travel north of Pyongyang to glimpse the train carriage from Stalin and the weapons from Castro. 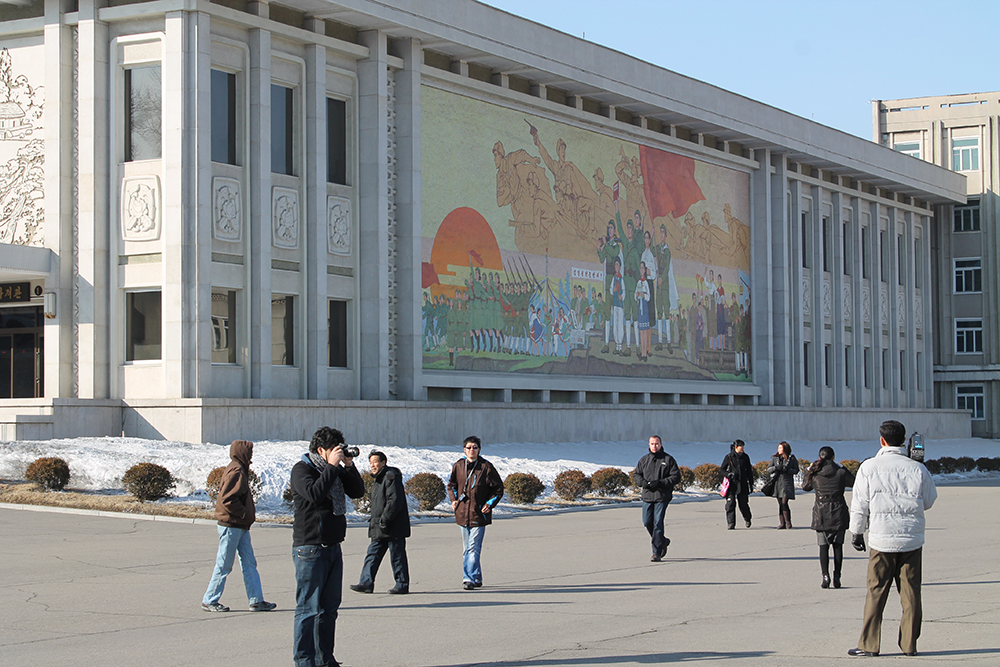 Kim Jong-il was a notorious film buff and used the medium as part of the regime’s propaganda. He was a regular sight at this film studio on the outskirts of the capital, where they boasted of his visits. We arrived on a public holiday, so no action was taking place, but did spot another tour group. 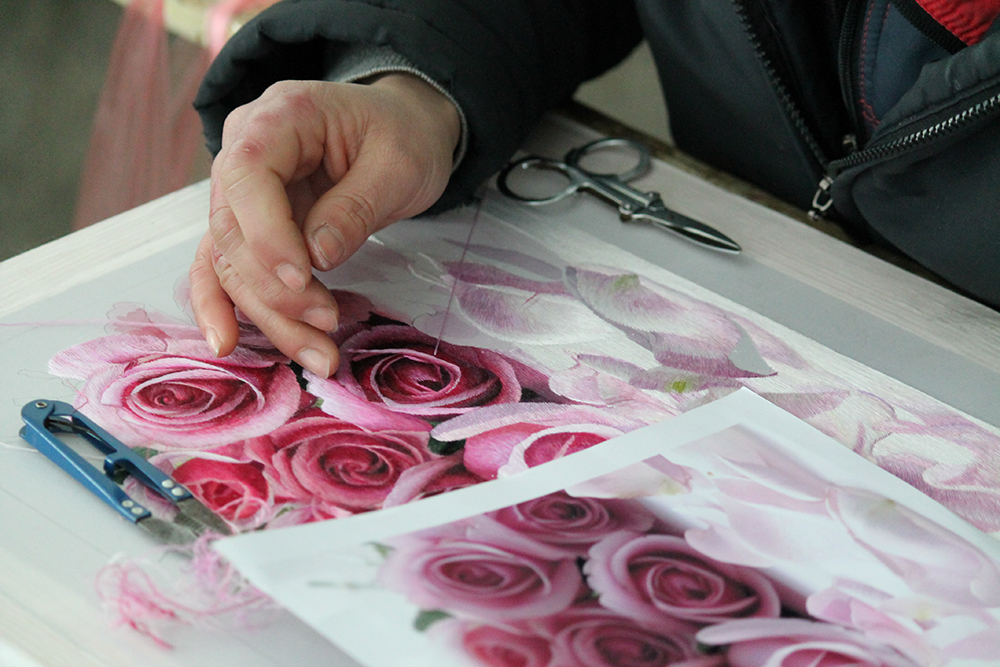 North Korea can be very masculine in its emphasis, with constant talk of war and monuments erring on the side of the phallic, and a visit to the embroidery guild did nothing to even the score for the country’s women. The guild was established by Kim Jong-suk, but most of the photos were of her husband giving on-the-spot guidance building the facility in her honour after her death. Tourists can watch women work and purchase finished pieces. 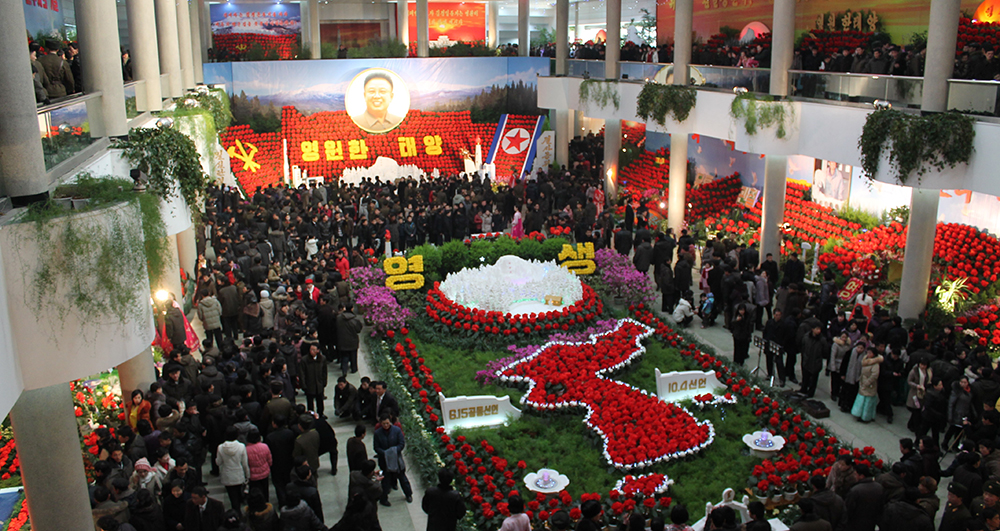 Even the flowers are for the Dear Leader. Kimjongilia, a red begonia, is pretty much the only flower on show during a February exhibition marking the late leader’s birthday. Kimilsungia, a purple orchid, gets its time in the sun in April. 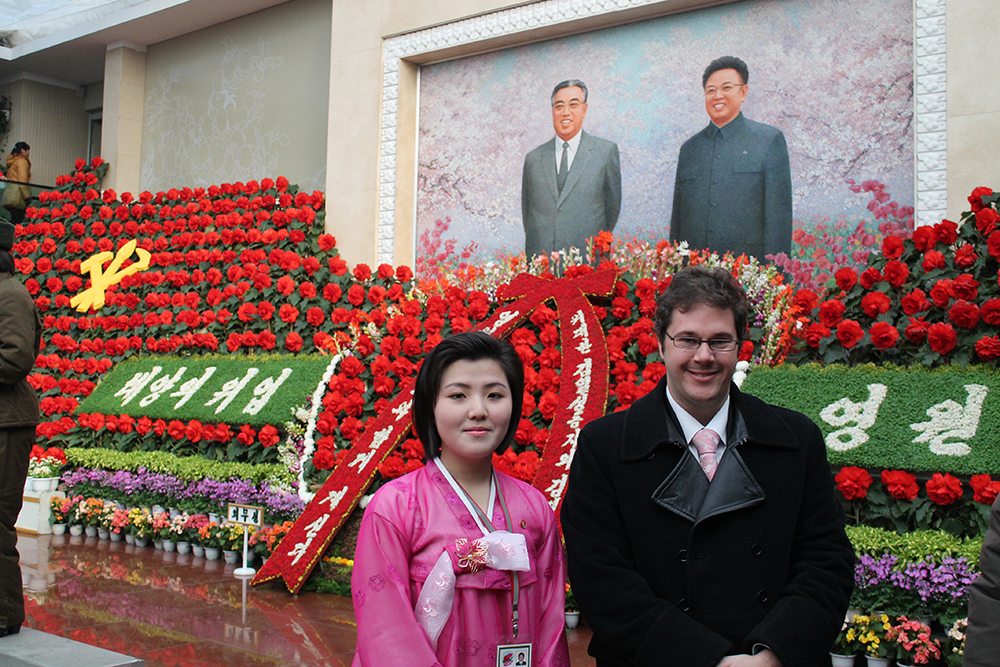 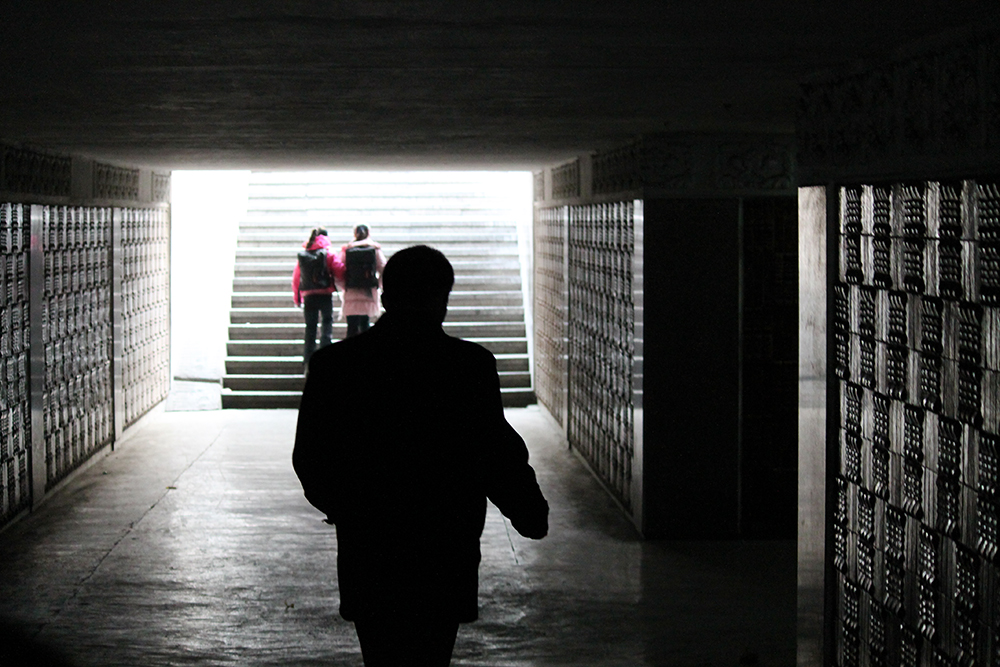 While we were never left unescorted, one afternoon we were freed of the van and walked back to the hotel through the city. Walking through this underpass to cross the street was one of the rare moments we were among the people of Pyongyang.

One week it’s on the brink of all-out war, the next announcing ambitious plans to increase tourism – there are rarely any dull moments watching what North Korea will do next. The recent announcement that the Hermit Kingdom wanted to increase tourism tenfold and welcome up to a million visitors by 2017 and double that again by 2020 was totally in character for a nation prone to hyperbole. But those who have been always say the same thing: go now, before it’s too late.

Visiting North Korea is also like no other holiday on Earth. You are followed everywhere, and even though you will want to photograph everything you will likely get told off if you point the camera out the window of a moving vehicle, towards a construction site or at anything remotely considered a bad look for the country.

The days tended to be busy, with at least two destinations to see. The itinerary has to be fairly strictly observed, although in some cases that seemed to be largely to ensure the destination had the lights switched on when we arrived.

If we stayed in Pyongyang, we would return to our hotel for lunch. On road trips north and south, there was the chance to eat out, but without fail it would be a hotel lunch away from wherever North Korean citizens were. On most nights, we were back in the hotel by 6pm. We had to make do with playing pool and downing beers in the hotel’s various bars, and chatting with either the waitresses or the minders who had been with us all day.

A Hong Kong businessman broke the monotony with strawberries one evening, and we ventured out to a pizza restaurant on another occasion only to find Western NGO workers. In exchange for hard currency, euros in my case, the hosts put on the best show they can.

It’s impossible to deny enjoying my journey to the Orwellian state, but I was also keenly aware that unlike millions living there I had the luxury of being able to leave.

Michael Ruffles is an Australian journalist based in Bangkok.