Aid in the court of public opinion

When I started researching Australian public opinion about foreign aid with colleagues from the ANU Development Policy Centre in 2014, the topic had not been seriously studied in over a quarter of a century. Perhaps unsurprisingly, amidst the sea of polling data available, there was considerable confusion about just what Australians thought about aid. At one point it was even claimed that most Greens supporters were in favour of reducing aid.

The publication of a new paper in Asia & the Pacific Policy Studies on this subject is a good opportunity to recap what I’ve learned through research since 2014.

As I show in this journal article, most Australians approve of the Australian Government giving aid to other countries. (Click to see chart) 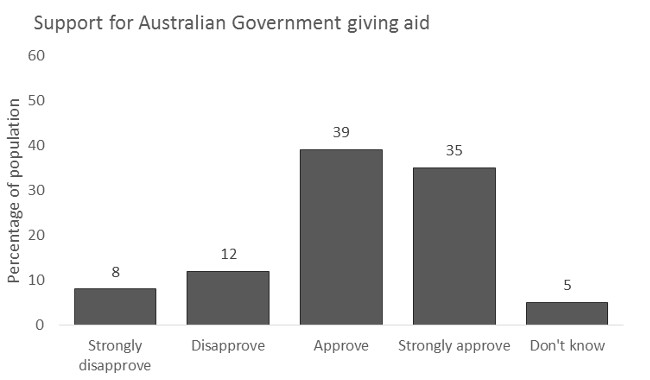 At the same time though, when they were convinced there was a budget emergency in 2015, most Australians were happy to see the government aid budget cut. (Click to see chart) 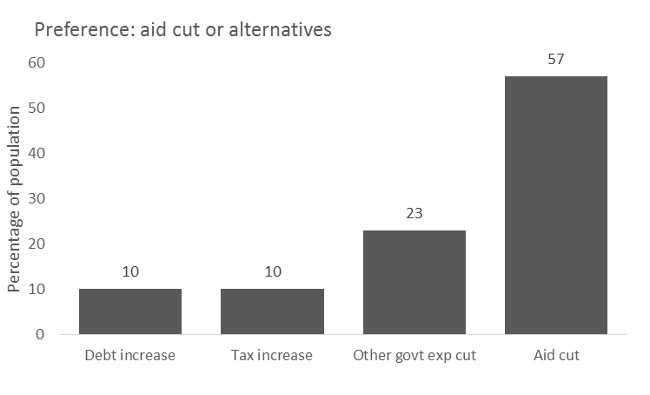 This thirst for cuts has mellowed now, however, and polling after 2015 has consistently shown that the majority of Australians no longer think Australia gives too much aid. Having said this, it’s still the case that only a minority of Australians are in favour of increasing aid. Most are quite happy for aid levels to stay where they are.

Views about aid are clearly political. Although the majority of supporters of all major parties approve of Australia giving at least some aid, there is a clear left-right divide on aid volumes: Labor, and in particular Greens, supporters are much less likely to support aid cuts than Coalition supporters.

This has been the case in all the surveys we have run. And it has been the case both when looking at the relationship between political preferences and support for aid, and when controlling for other personal attributes using a range of statistical analyses, as I do in the journal article. For instance, it has never been the case that most Greens voters wanted aid cuts – people who claimed this were simply misreading survey data.

Australians’ views about aid are not immutable. As the second page of this report shows, support for foreign aid fell between 1998 and 2014.

However, working out what changes views is not straightforward. Once, I’d thought that accurate information might do the trick. Perhaps, for example, Australians only ever thought their country gave too much aid because they believed it gave more aid than it actually did. In earlier work, Camilla Burkot and I had shown that most Australians overestimated how generous Australia was as an aid donor. We’d also shown that people who overestimated by larger amounts were more likely to want aid reduced.

Yet, when I used a survey experiment to test the effect of providing Australians with correct information on how much their country actually gave, I found that accurate information had no effect at all on their opinions.

However, that wasn’t the end of the story. When I experimented again, this time contrasting Australia’s relatively lax aid effort with the United Kingdom’s generosity, I found a major effect: many more Australians now thought Australia did not give enough aid.

Australian views about aid can be changed, but the psychology of opinions about aid is complex and the information required to change views is not always what you might think it is.

Finally, there is the question of the objectives Australia wishes to achieve with its foreign aid program. Increasingly, the Coalition has tried to sell the program to the Australian public by highlighting the benefits giving aid brings to Australia. On the basis of the data I have collected, this seems misplaced. As I show in the Asia & the Pacific Policy Studies article, most Australians want their aid given to help people overseas, not to bring benefits to Australia. (Click to see chart) 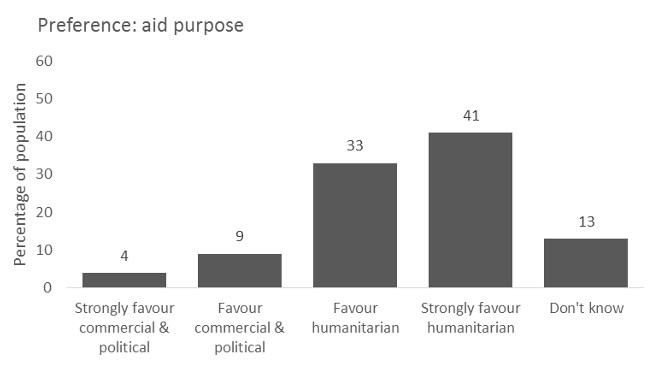 Does all of this matter? Do the views of the public actually influence political decisions about aid? I think so.

As I discuss in the introduction to the journal article, there is reasonable international evidence that public opinion has at least some effect on political decisions about aid. And in Australia, politicians and their staff have shown an interest in the data I have gathered. Australian politicians also claim that that public support is needed if aid is to be increased.

Such claims may simply be politicking, of course. Yet, it is hard to imagine that the Coalition government would have casually cut the foreign aid budget, time and time again, and that the Labor opposition would have been so timid in opposing these cuts, if most Australians felt that Australia wasn’t giving enough.